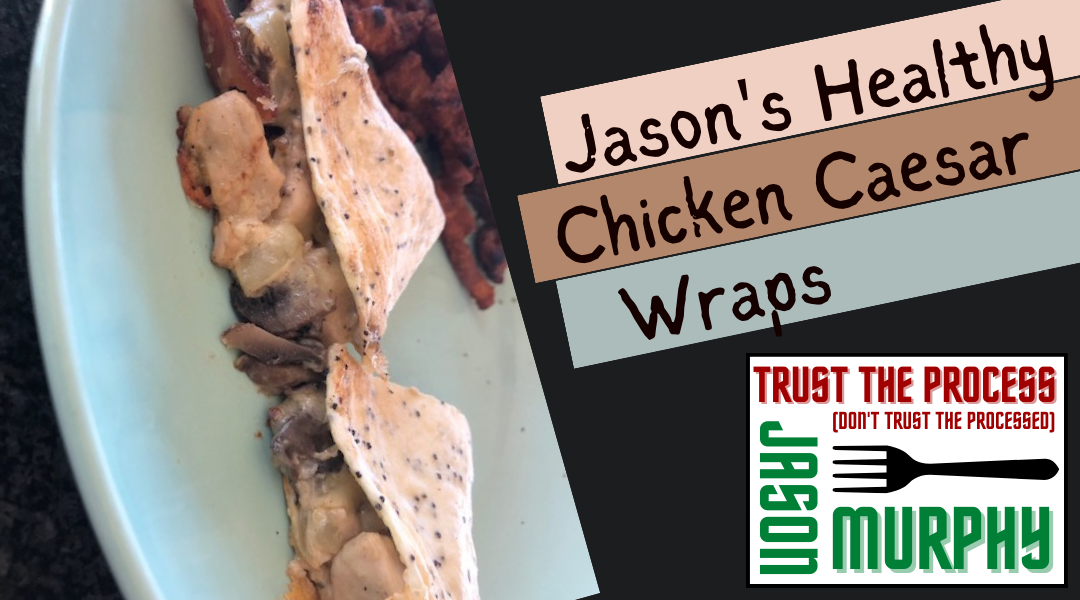 Nothing beats a wrap for quick and fun convenience food.  Even on my performance geared purpose eating lifestyle, wraps can be a great way to have a stockpile of quick and easy lunches.  Wraps can also be full of simple carbs, bad fats, unnecessary oils and additives.
If you are going with a frozen variety from a big box store, the ingredient list is long, confusing, and suspect to say the least.  Getting your wrap from a fast food joint first means salt, and lots of it, followed by all the things wrong with a store bought frozen wrap.  So, that’s a wrap on getting wraps anywhere but from your own kitchen.
Why would it be any other way?  The biggest advantage to making your own is choosing higher quality ingredients than any mass produced wrap would ever have, but also choosing much lower calorie foods to make your wrap.
It’s getting close to the end of January, when those New Year’s Day resolutions are starting to lose steam.  Remaking a food you love means you can eat more of it, leaving you feeling less deprived.  If you are feeling less deprived, you won’t fall off your goal wagon by binge eating everything in sight during a moment of weakness.
These wraps are so low in calories, I allowed myself two of them at a sitting, and could not eat another bite, while still maintaining almost 50 year old 6-pack abs.  Diets fail when you are starving yourself by only eating 1/2 of a grapefruit a day, or only drinking some nasty pre-made shake.  Slamming hot and delicious bacon caesar chicken wraps?  That we can do with great success.
That being said, the ingredients are crucial.  I used to make these wraps back in my previous life, and they weren’t any lighter or better for you than pre-made ones by much at all.  I was using giant white flour tortillas, heavy salad dressings, sugar and nitrate ladened bacon.  That all has to go.  First, the wrap itself.  It’s the most crucial part of the wrap, for obvious reasons.
My new life used to require making some type of replacement from scratch, adding tons of extra ingredients and cook time to this recipe.  Finding Egglife wraps has been such a huge help, because now all that is eliminated.  These wraps are only 25 calories, 1 carb, and 6 grams of protein.  They taste and act just like regular flour tortillas.  I may never go through the trouble of making my own again. 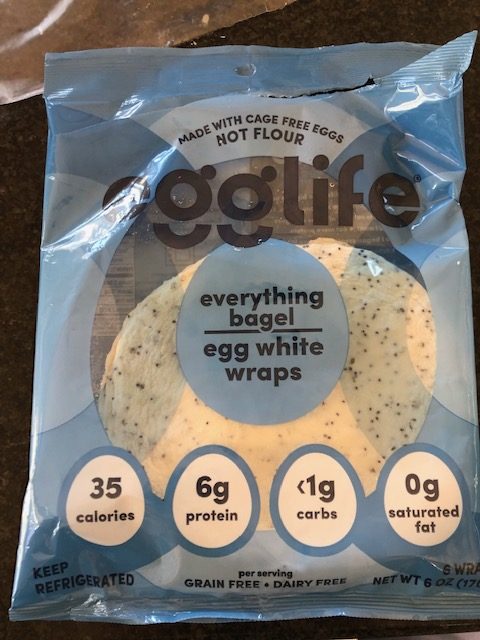 The time required for preparing healthy home cooked meals is always one of the biggest obstacles to overcome, and these wraps definitely help with that issue.  Then we come to the flavor maker…bacon.  It’s crazy that sugar, hydrogenated oils, and chemicals can be hiding in your bacon, but they are, and you should be reading the label every time you buy a package.  Using a very popular and not cheap brand, the ingredient list reads:
Pork, cured with: Water, Salt, Sodium Phosphates, Sugar, Hydrolyzed Soy Protein, Sodium Erythorbate, Flavorings, Sodium Nitrate
Notice how sodium is listed three different times there?  Plus, it’s sodium bonded with nitrates, which are linked to cancers and health issues.  Also, the mysterious “Flavorings” which could be anything and everything, and none of it good.  Not only is it not needed, it’s just making bacon more unhealthy than it needs to be.  I use Nature’s Rancher bacon, and the ingredients list is short and sweet, which is to say there is no added sweeteners.
Pork, Water, less than 2% of: Salt, Vinegar, Citrus Extracts, Pomegranate extract, Rosemary extract 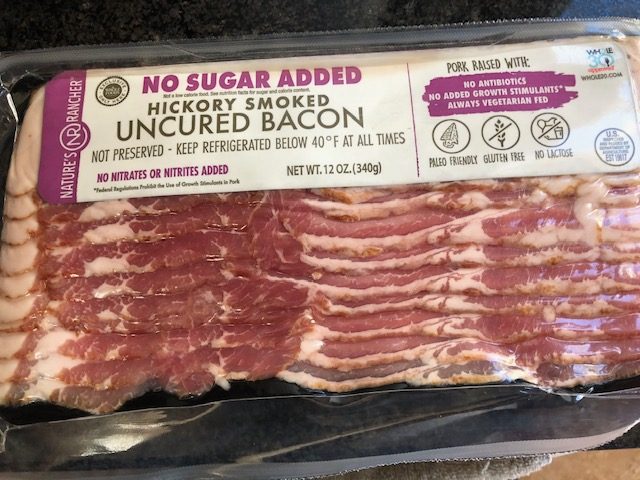 See how instead of hiding behind the ambiguity of “Flavorings”, they list Citrus, Pomegranate, and Rosemary?  That’s because they don’t have to be afraid you would read the list of actual ingredients and then run away screaming in fear.  No one that ever hides truths and facts is doing so in good faith, be it in life or in food production.
The dressing is also a critical component.  Sure, you can buy some anchovy paste and make your own Caesar dressing, as I have done in the past.  But, Primal Kitchen has excellent dressings that have simple ingredients and use avocado oil as its base, and that works for me.  It’s tasty, saves time, and has none of the sci-fi ingredients that your normal store bought dressings have in them. 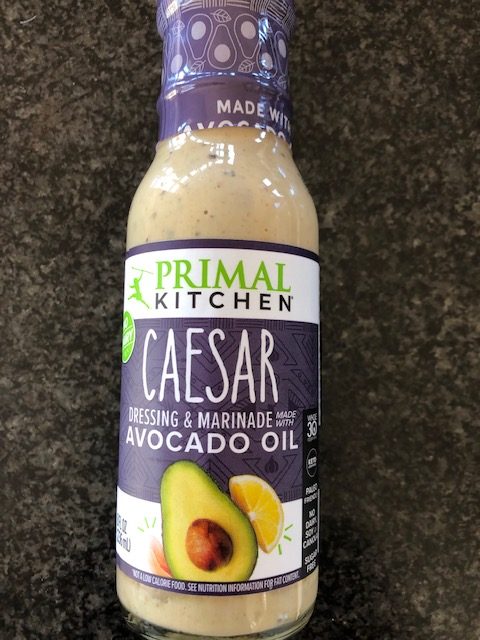 Round it out with some grass fed cheddar, and the overhaul is complete.  You now have a much lower calorie, lower sodium, and a My First Chemistry Set free version of a wrap.  It tastes much better and is better for you.  If you think it needs salt, that probably means that you are accustomed to way, way too much sodium.
Here’s a simple test.  Order any fast food or sit down restaurant meal.  If your first reaction isn’t to exclaim loudly “Holy Hell that is salty!” and then gulp every glass of water on the table, then you have failed the test.
The only way to defeat it is to just stop eating foods overloaded with sodium.  Your taste buds will adjust, and soon you will actually be able to use just enough salt to bring out the flavor of the actual food you are eating, rather than enough to preserve it for a Nuclear Winter.  Most fast food wraps are pushing 2000 mg sodium.  It’s no wonder the southern states are considered “The Stroke Belt”.  Blood vessels are a ticking time bomb after a meal like that, not to mention the salty fries that come with it.
This Caesar Wrap recipe is fast, easy to make, loaded with protein to support lean muscle mass, and won’t make blood spurt out of your ears like you are a macabre water sprinkler in a Rob Zombie video.  When Julius Caesar asks “You too, Brutus?” you can say “Damn right, and stop calling me Brutus.”
CAESAR CHICKEN WRAPS
Ingredients:
4 pasture raised chicken breasts
1 yellow onion, diced
1 package mushrooms, chopped
2-3 garlic cloves, diced fine
3-4 slices bacon, cooked and crumbled
1/2 package grass fed cream cheese, softened
1/2 cup Caesar dressing
Grated grass fed cheddar cheese
Egglife Egg white tortilla wraps
1/2 tsp sea salt and fresh cracked pepper
Olive or avocado non-stick spray
Instructions:
Trim and dice your chicken into bite sized chunks.  Season with the salt and pepper and cook until no longer pink: 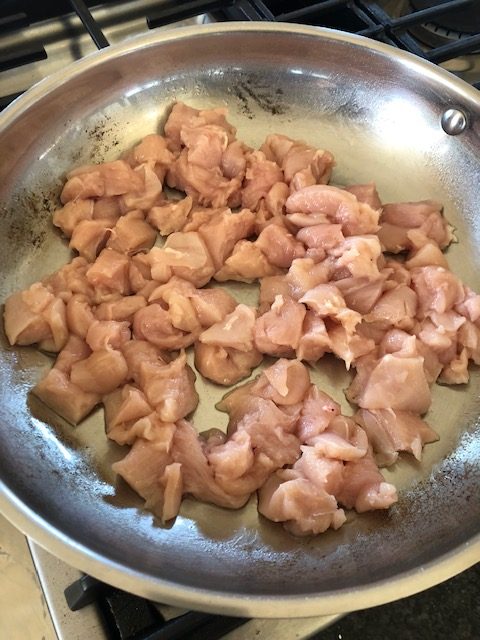 Add the diced onions and mushrooms and cook until softened.  Add the garlic and cook for another minute or so.   Drain if needed.  Whip the cream cheese in a mixing bowl until smooth.  Add the dressing and beat again: 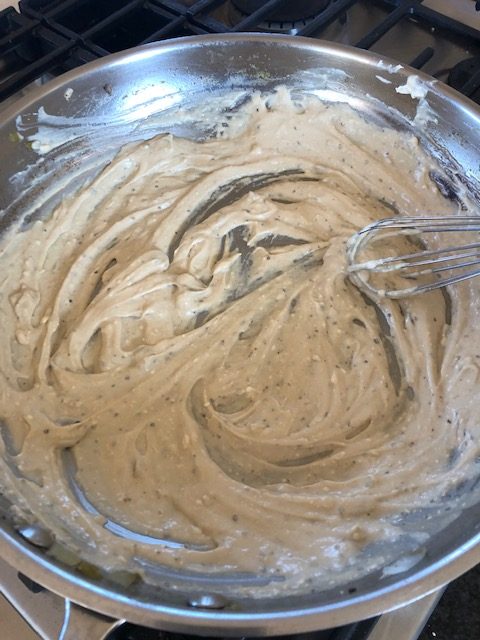 Add the dressing mix to the pan with the drained and cooked chicken and just heat through.  Line a plate with paper towels and cook your bacon until crispy, times will vary.  Listen for it to stop popping, then it’s going from cooking to burning:

Preheat your oven to 400 degrees.  Spray a large baking sheet with non-stick and lay down 6 egg white tortillas.  Sprinkle a base of some shredded cheese: 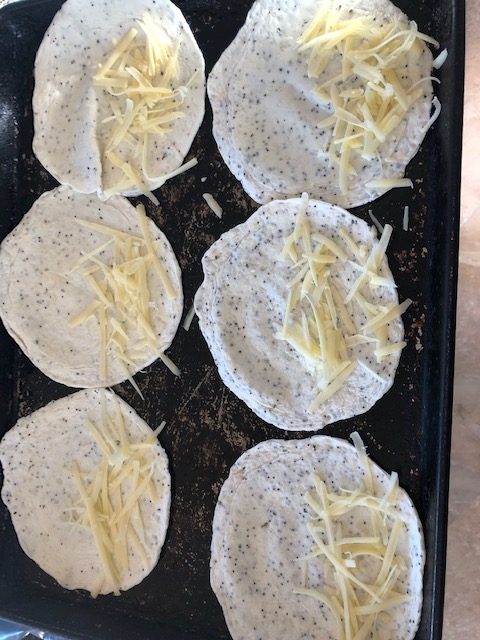 Spoon a helping of the chicken on top of the cheese, sprinkle some crumbled bacon, top with a bit more cheese, and fold over the tortilla: 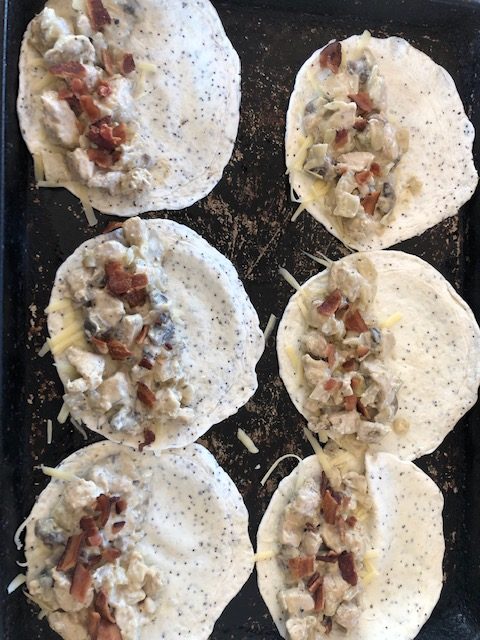 Bake on one side for 5 minutes.  Take out of the oven and hit the tops with a quick blast of non-stick before flipping over to bake again for 5 more minutes: 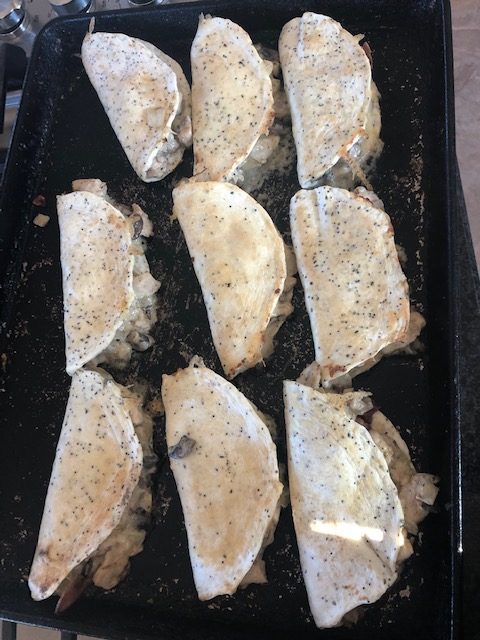 Slice and enjoy with some baked jicama fries: