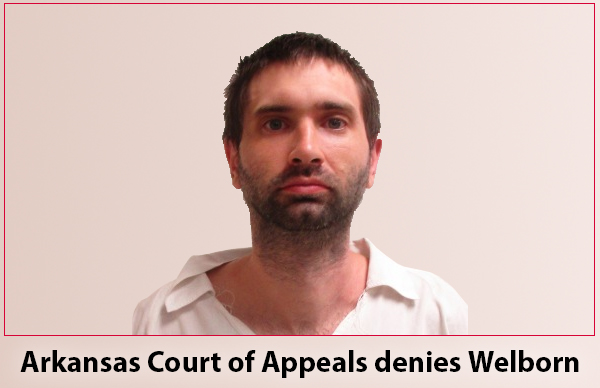 A Paron man lost his bid for less prison time in the Arkansas Court of Appeals Wednesday.

Jonathan D. Welborn, age 35, of Paron, was appealing his July 2019 sentencing of 52 years in prison, related to the drowning deaths of his two young children. At that time, he was sentenced by a jury that deliberated for approximately 20 minutes.

Welborn, currently serving time at the Varner Unit in Gould, Arkansas, filed a pro se appeal (without retaining an attorney and acted as his own counsel). He claimed the long sentencing was due to “prosecutorial bias,” noting that the prosecutor listed sentences for the jury on a white board. The Court ruled there was no merit to the appeal.

He was originally charged in 2017 with two counts each of Negligent Homicide and Endangering the Welfare of a Minor in the First Degree. He was found to have methamphetamine in his system after driving down an embankment and into a pond. His 2-year-old daughter and 5-month-old son were in the vehicle with him when it submerged and they drowned. Impaired from the meth in his system, Welborn went back into the house to play guitar.

See the full police report narrative, court files, obituaries and more on this incident at www.mysaline.com/welborn-sentence.