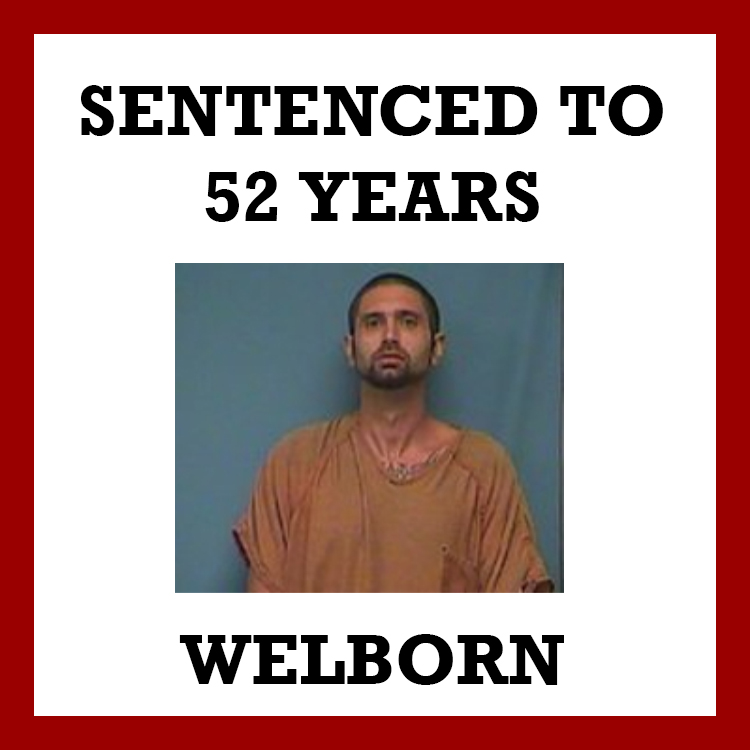 A Saline County jury convicted Jonathan Welborn, 32, of Paron of two counts each of Negligent Homicide and Endangering the Welfare of a Minor in the First Degree in connection with the deaths of his two children that drowned when Welborn drove his vehicle into a pond. The jury sentenced Welborn to the maximum consecutive penalty on all offenses, 52 years in the Arkansas Department of Corrections.

The children’s mother, Brittany Hairston, testified that the couple and their two small children, Sophia, 2, and Zane, 5 months, had been swimming at the Janeway Hole on the afternoon of June 28, 2017. Both she and Welborn had been drinking whiskey. The family, along with Jericho Cantrell, left the swimming area and went to a house on Highway 298 in Paron. While the family was at the house, the children remained in the truck. Welborn smoked methamphetamine at the house and became irritated with Hairston because she wanted to stay at the residence and play pool but he wanted to go home.

Welborn told Hairston he was going to take the children home and come back for her. Testimony showed that Welborn backed out of the driveway at a high rate of speed. The truck went down an embankment and travelled in reverse approximately 200 yards in to a pond where it submerged.

Welborn testified that he threw his daughter out of the window of the truck as it sank and tried to unbuckle his son’s car seat but couldn’t. He testified that he saw his son’s head go under the water. As the truck sank, Welborn escaped out of the window of the truck. Welborn stated that he then went back up the hill, entered the residence and started playing guitar. Both of the children drowned. An expert in drug recognition tested Welborn shortly after the incident and found them to be impaired by amphetamines. His urine later confirmed that he had methamphetamine in his system.

The jury took approximately 20 minutes to find Welborn guilty on all counts. The Saline County Sheriff’s Office investigated the case with assistance from the Benton Police Department and the Arkansas Game and Fish Commission.

The reporting officer, Joseph Traylor, wrote the following narrative from the scene of the initial arrest.

I arrived on scene to find members of the Paron Fire Department outside the residence and beside the pond. I was informed by one of the fire department members that they had just located one of the juvenile victims, a six month old male. The male had no pulse, was not breathing and was not responsive. EMS personnel initiated CPR upon the male.

I then walked to the pond where I located the truck. I could see the headlights and taillights of the truck through the water. The entire truck was submerged. The truck was oriented such that the front of the truck was facing east. There was debris that appeared to have come from the truck strewn throughout the top of the pond. After a few minutes of searching, I observed that a fire department member had located the second victim, a two year old female. The female was not clothed. The female was also not breathing, had no pulse and was not responsive. EMS personnel immediately began performing CPR on the female.

I then spoke with Suspect Mr. Jonathan Welborn, who was standing beside the pond near where the fire department member located the female victim Mr. J. Welborn identified himself as the owner of the truck and the father of the two victims. He stated that he and his fiancée, Suspect Ms. Brittany Hairston, had been at “The creek” swimming and she wanted to stop at the residence to see a friend. He stated that he didn’t want to stop, but he did so anyway. Mr. J. Welborn states that Ms. Hairston went inside and he stayed in the truck with the two juveniles. He identified the two juvenile victims as Mr. Zane Welborn (DOB 1/5/17) and Ms. Sofia Welborn (DOB 6/15/15). He states that he went inside to check on Ms. Hairston, leaving Mr. Z. Welborn and Ms. Welborn unattended in the truck. He states that when he returned to the truck, it was missing, along with the children. He states that he then located it in the pond across the highway, at which time he dove in to try to rescue the children.

It was at this time that I was joined on scene by Sgt. W. Bean #620. I asked Sgt. Bean to place Mr. J. Welborn in the back seat of his patrol car so that we could keep him separated from Ms. Hairston. I then went to speak with Ms. Hairston.

Ms. Hairston was hysterical and was not able to speak with me in complete sentences. She had a very strong odor of intoxicating beverages upon her breath and person. I attempted to ask her about what happened, but I was not able to get intelligible answers. I then left Ms. Hairston with a member of the fire department. 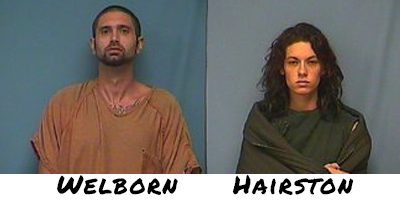 Both Mr. Z. Welborn and Ms. Welborn were flown by helicopter to Arkansas Children’s Hospital for treatment. I was later notified that both children were declared to be deceased. Sgt. Bean notified the on-call CID member, Det. M. Hall #43, by telephone. He then told me that CID was responding to the scene.

After departing the jail, I was contacted by telephone by Det. Sgt. Davis and asked to return to the jail to assist in the performance of a DRE examination upon Mr. J. Welborn. At his request, I completed the Arkansas DWI Statement of Rights Form with Mr. J. Welborn. Mr. J. Welborn stated that he understood each right individually and collectively. He then agreed to take a breath and urine test. He then initialed and signed the form appropriately.

I conducted the Intoxilyzer BAC test upon Mr. J. Welborn and received a result of .000. The test number was 2570 and the time of test was 0159. I turned the rights form and a copy of the BAC results over to AGFC Ofc. S. Paul #152. Ofc. Paul then performed the remainder of the the DRE examination.