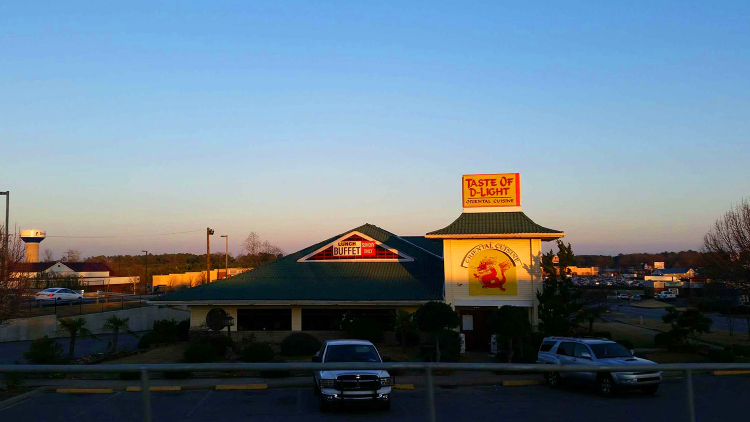 I received a message from a reader yesterday that said they believe Taste of D-Light, a long-time Chinese restaurant in Bryant, was auctioning off equipment yesterday. He believes they are closing.

I have heard from a reputable source that owners Jerry & Lee Jones have sold to someone who will make it a liquor store.

I would like to say that I talked to someone at the restaurant about this, but they didn’t answer the phone. No clues on their Facebook page, since it hasn’t been updated since February 2013.

I have heard great things about this restaurant over the 23 years they have been in Bryant, so it will be sad to see them go, even if I wasn’t a customer. However, my source says it is still up in the air whether the Jones’ will retire or do something new.

Update May 5 2016: The Next New Liquor Store in Saline County About to Open in Bryant

COMMENTS FROM OLD VERSION OF MYSALINE:

Jerry is a veteran and a Christian. He met his wife while serving overseas. You will never meet a nicer couple and have never eaten in a cleaner facility with no rush great food.

That is about the only place my wife and I dine out. Quality food and service. One of the things I miss about New Orleans is having owners on premises making sure you enjoy your experience. Jerry and Lee will be missed. Best wishes to them and their future.

Mr. Jones has told me on numerous occasions that he was ready to retire and he was just waiting for someone to buy the business. He wants to move to Florida to be near his son. We will miss him but I know he will enjoy retirement.

Jerry and Lee have worked very hard to provide great service to customers for many years. I have been a customer since they opened and will really miss them and their great food and service. GOD bless you both for all of the years you have worked so hard. You will be missed for sure.

I spoke to Jerry earlier this summer and they are retiring. I thought they would give more notice though. They were open right before Christmas and then closed! As far as it becoming a liquor store, I don’t know. I would hate to see that because that intersection is already so busy and a lot of accidents there. They will have to do something there.

Yes, they are closing. And yes its sad that another liquor store will be taking the place. I agree with Guy, Id rather see another restaurant there. There is already a liquor store that sells wine and beer in that area.

Jerry and Lee deserve to retire.. They have worked so hard for so many years and they are old enough to retire. But.. a liquor store? Blah! I would have rather seen another high quality restaurant take over.