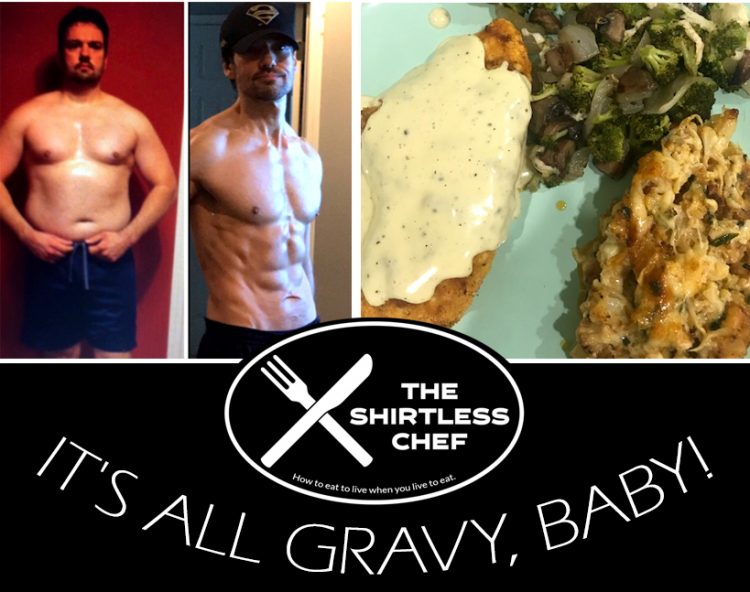 There are some dishes that are required to be on a rotation when you live in this part of the world.  I’ve already covered a few of them like Chili and Cornbread, Catfish, and soon Shrimp and Grits will be coming out.

Today, though, is probably the quintessential meal of the south, and that means taking some form of protein, coating it in a breading, and then smothering it in pan gravy.  It doesn’t even matter what the protein is, steak, chicken, eggs, an old boot… as long as there’s gravy, it’s going to be good.  As a kid with an OTR big rig driver for a father, I used to love going into the TA truck stop Iron Skillet restaurants and eating a giant chicken fried steak and mashed potatoes that were just barely poking out from under a deep stagnant pond of pepper gravy.

I looked up the nutrition listed on the TA website and just for the chicken fried steak itself not including the sides, we are talking 800 calories, 49 grams of fat, 19 grams of saturated fat, 515 mg of cholesterol, 1900 mg of sodium, and 51 grams of carbs.  Wow.  It’s a good thing we were in a Peterbilt 359, because I don’t think a passenger car would have had the torque to carry me home after eating that in one sitting.  I owe my heart a lengthy apology for all I have put it through over the years.  As bad as those numbers are, I  still couldn’t just leave gravy by the highway exit with it’s thumb out trying to catch a deadhead ride East from Gallup to Tucumcari.  We just have to find a way to lighten the load so we can get through the weigh station… not the one on the interstate, but the ones we keep on the bathroom floor.

Let’s face it, skillet pepper gravy is the ultimate example of what not to eat, simple carbs in the flour, saturated fats in the butter or bacon grease, and tons of calories in the heavy cream.   There are simply no redeeming qualities there, nothing your body can do with that except turn it into belly fat or some insulation inside arteries.  And that’s if you made it from scratch.  If you happen to be one of those unfortunate souls to have ever consumed gravy made from a store bought packet, there are some truly terrifying happenings going on inside there:
Ingredients
PARTIALLY HYDROGENATED SOYBEAN AND/OR COTTONSEED OIL, FOOD STARCH-MODIFIED, ENRICHED BLEACHED FLOUR (WHEAT FLOUR, NIACIN, REDUCED IRON, THIAMIN MONONITRATE, RIBOFLAVIN, FOLIC ACID), CORN SYRUP SOLIDS, SALT, MONOSODIUM GLUTAMATE, CONTAINS LESS THAN 2%: PEPPER, SPICES, ONION, BUTTERMILK, DEXTROSE, MALTODEXTRIN, SODIUM CASEINATE, MONO & DIGLYCERIDES, YEAST EXTRACT, NATURAL AND ARTIFICIAL FLAVORS, DRY PORK STOCK, GROUND PORK, CARRAGEENAN, FERMENTED MOLASSES, DISODIUM GUANYLATE, DISODIUM INOSINATE, SESAME OIL, CITRIC ACID.

Yikes!  Anytime you see the words “PARTIALLY HYDROGENATED”  in front of an oil, that means dangerous trans-fats, the worst kind you can eat.  Most of the other items listed there are up to no good as well, and it’s best to not even look at those packets in case you anger one.

However, there is an easy way to transform homemade gravy.  It’s as easy as swapping out a few decidedly unhealthy ingredients, and then the process is exactly the same.  If you have ever made a roux for a normal gravy, it’s all the same steps for my heart and scales friendly version.  The key ingredients are using grass fed butter and heavy cream to get their healthy omega-3 fats, and swapping out bleached AP flour for chickpea flour.  Chickpea flour is made from stone ground garbanzo beans, it’s a good source of fiber, protein, and it’s gluten free for those of you with Celiac.  It has a neutral taste so it functions just like AP flour, just without the bleach and simple carbs.  It’s also easy to find in the local mega-marts.

I lightened the calorie load by using chicken for the protein here and baking instead of frying, but it works the same with steak.  Just make sure you pound it flat for even cooking, and if you have a 48 blade meat tenderizer, that will work wonders for a chicken fried steak.  I also roasted cauliflower in a cream sauce, then baked it for a side dish.  There are plenty of healthy alternatives for sides that work well with any gravy dish… because it’s gravy.
Chicken Baked Chicken with skillet pepper gravy
Ingredients:
Instructions:
Preheat the oven to 400 degrees.  Set up a dredging station with one pan holding the coconut flour, one holding the two eggs scrambled with a fork, and another with the almond flour mixed with 1/2 tsp of sea salt, pepper, onion powder, garlic powder, and smoked paprika: 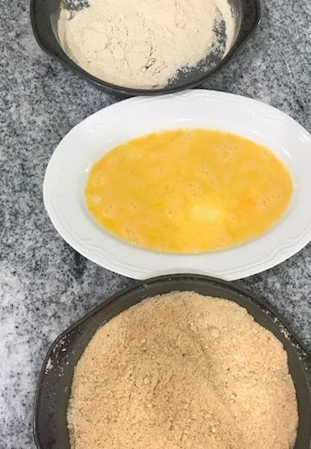 Trim the chicken breasts of any excess fat and pound thin if needed, then sprinkle each side with the remaining 1/2 tsp of sea salt, pepper, onion powder, garlic powder, and smoked paprika.  Place a sheet of parchment paper on a baking sheet and hit with a blast of non-stick spray. Dip each chicken breast in the coconut flour, shake off the excess, dip in the egg wash and let the excess drip back off, and then coat both sides in the almond flour.  Place each breast on the parchment paper when done: 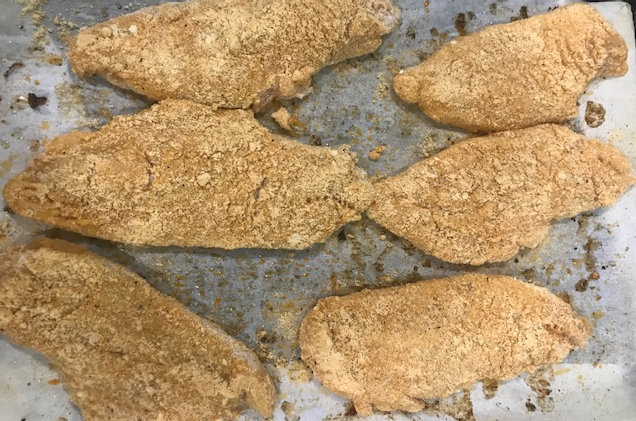 Bake for 30 minutes or until the internal temp hits 170 degrees, flipping after 15 minutes: 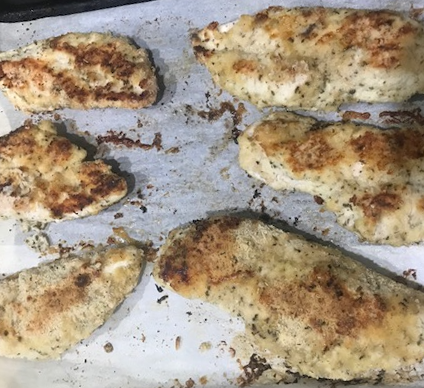 Measure out your ingredients for the gravy.  Start with just one cup of heavy cream.  It’s easy to add cream to gravy to adjust thickness, but much harder to adjust a thin gravy: 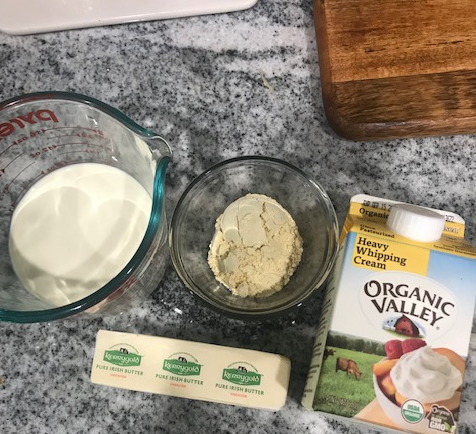 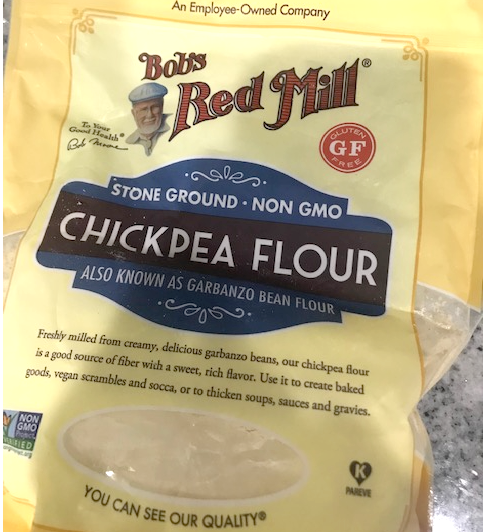 Once the butter is melted and starts to foam, add two tbsp of chickpea flour and stir constantly until the flour is smooth and starts to smell nutty.  Cook to a pale blonde: 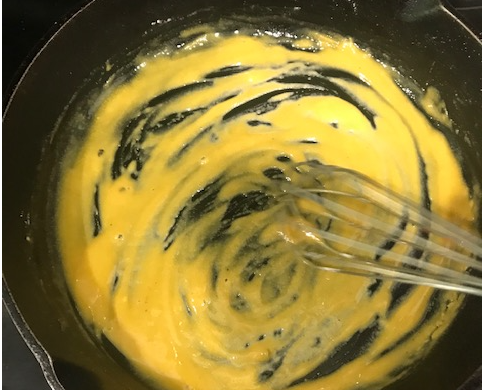 Stir in one cup of heavy cream and mix constantly until the mix is smooth.  You will need to adjust the heat down as it starts to boil and thicken: After it thickens, season with 1/2 tsp of sea salt and a healthy grind of pepper.  Then slowly add heavy cream and continue stirring, cooking over low heat until the gravy hits your preferred thickness.  It will continue to thicken as it sits, so keep that in mind.  Once it hits the consistency you are looking for, taste test and and more salt/pepper to your taste.  Pour over the baked chicken (or anything else you might have lying around) and enjoy.  Served here with roasted broccoli and baked cauliflower with cheese sauce: