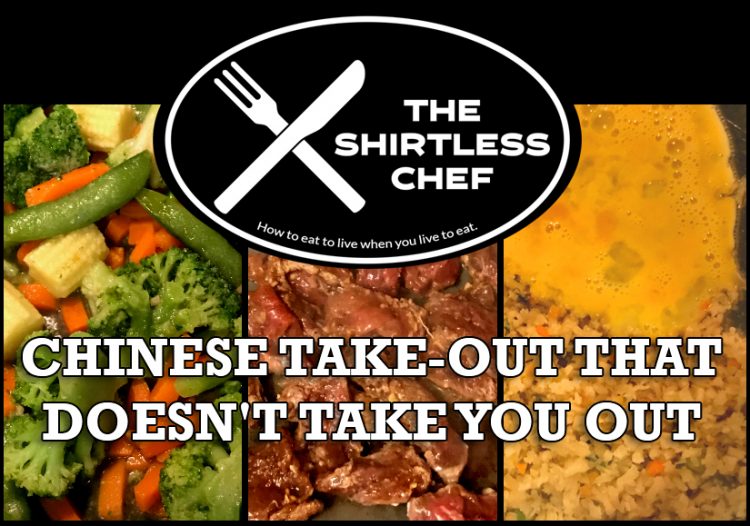 And when I say I miss Chinese food, that really means I miss heavily Americanized Chinese dishes loaded with sugar like Sweet and Sour Chicken with fried white rice and a deep fried egg roll. The entire plate would then be lavishly dunked with that nuclear orange sauce like an overzealous preacher baptizing people in a creek with bad time management skills. I would absolutely drown my food in it.

Since sweet and sour sauce is just water, sugar, modified corn starch, food coloring, and some pineapple juice, I had to give it up when I stopped eating processed foods and simple sugars. One tablespoon has 8 grams of simple carbs, and I was not dosing this stuff out in that small of a measurement. Think more along the lines of a 50 gallon barrel, and that will get you closer to the true portion size.

Fortunately for us, there are more savory and healthier dishes we can make that aren’t just extra chunky versions of hummingbird feed. Beef and Broccoli is a go-to meal for me when I crave Chinese. It’s a savory alternative to traditional oversweet Americanized Chinese food. It’s healthy take-out that doesn’t try to take you out!

Fresh ginger plays a role in this dish, and it’s a real powerhouse. It gets its name from the compound Gingerol which has powerful anti-inflammatory and antioxidant properties, can settle upset stomachs, relieve menstrual cramps, lower blood sugars, and fight cancer. Add all that to the fact that it brings some serious flavor to the party, and you can see why fresh ginger deserves a place in your cooking rotation. Pair that with fresh minced garlic and grass fed steak and you have take-out you can eat and still function as a human being instead of slipping into a diabetic coma for hours.

I also forgo using traditional soy sauce in this dish. Soy sauce can have 50% of the daily recommended sodium intake in ONE tablespoon! That’s around 1,030 milligrams, which is just crazy. I like to think the person that coined the phase “That’s enough to kill a horse” first said it after reading the sodium content on a bottle of soy sauce. I prefer to dictate the sodium levels in the dishes I cook. I get around this by using coconut aminos, which is made from fermented coconut sap and salt. The sodium content is just 270 milligrams per tablespoon. It tastes like a slightly sweeter version of soy sauce, and is gluten and soy free, plus has amino acids which are the building blocks of protein.

This dish also has me utilizing the dreaded frozen foods section of the local mega-mart, as I will use the frozen cauliflower rice with veggie medley of peas and carrots added, and the frozen Asian veggie medley as a side. One note here, these come in “Steam in a bag” microwaveable packages. DO NOT do this! All the bad mojo in the chemicals will transfer from the superheated plastic directly into your veggies, and that’s just not a good thing. Take the frozen veggies out and cook them on the stovetop instead. It doesn’t take very long, and your food won’t taste like you decided to eat it in the plastic grocery bag you used to carry it home. Here’s the recipe:

Peel the tough outer skin off a piece of ginger root and grate with a fine hole cheese grater. Mince the garlic cloves, and then add the ginger and garlic to a gallon freezer bag with 1/4 cup of the coconut aminos to make a marinade. 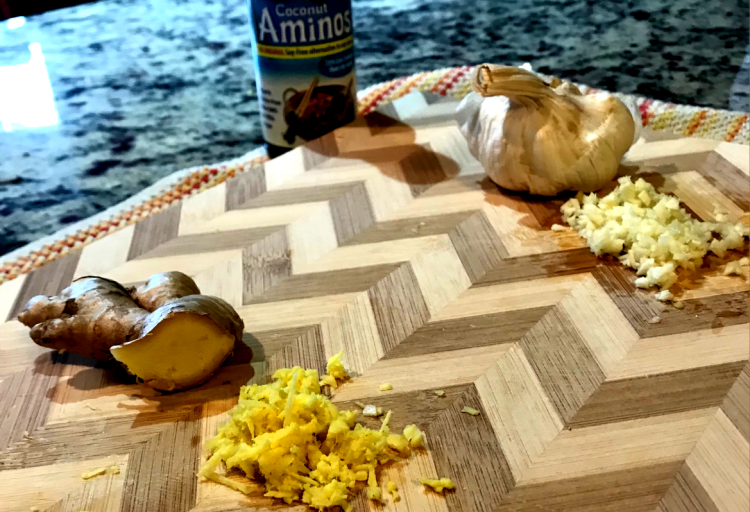 Trim all visible fat off of the steaks, and hit it with the 48 blade meat tenderizer if you have it. Then slice into thin strips against the grain, season with a pinch of sea salt and pepper, and then add to the marinade. Seal the bag and then work it around to get everything coated well, place the bag in a bowl and put it in the fridge for at least an hour. 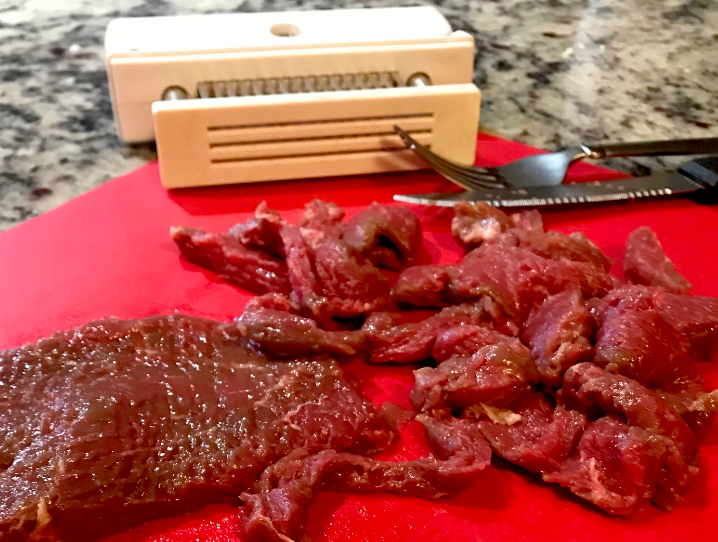 When the hour is up, blanch the broccoli in boiling water for 2 minutes and then drain it well. Heat a tbsp of avocado oil in a large pan and add the frozen cauliflower rice and 1/4 cup coconut aminos. Cook until all the moisture evaporates and the cauliflower is soft. 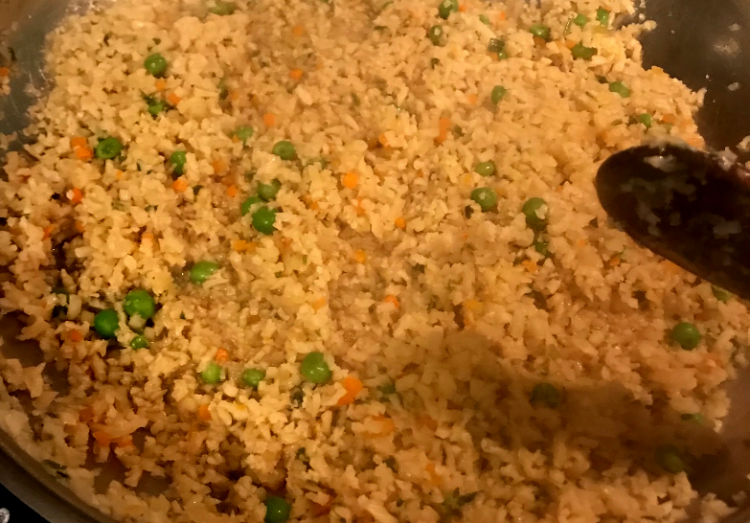 Place the frozen Asian veggies in another pan and cover to cook until done: 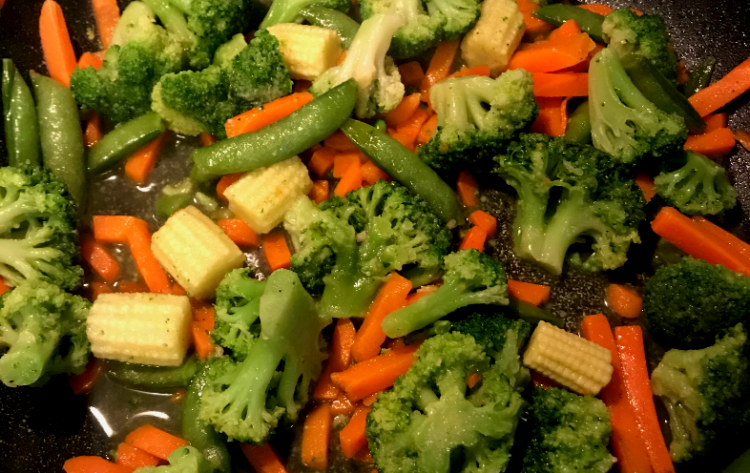 When the cauliflower rice is cooked and all moisture is absorbed, push the rice to one side and add two whisked eggs to the pan. Sprinkle sea salt and pepper, and constantly swirl with a spatula to make curdles in the eggs as they cook. 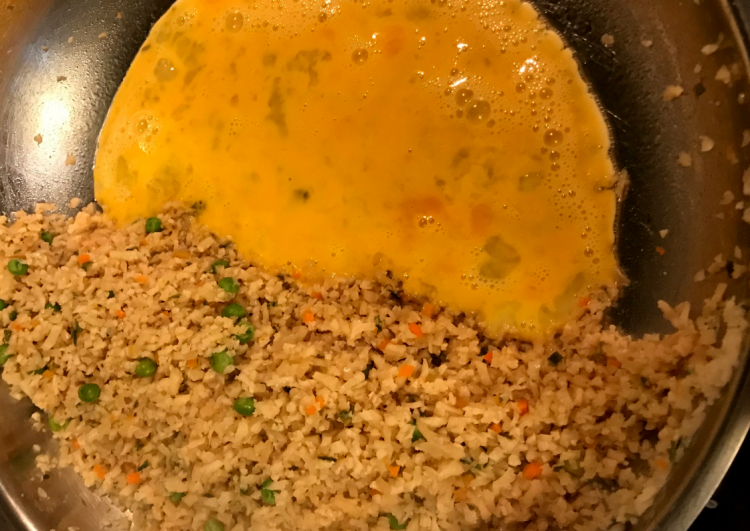 Once eggs are cooked and scrambled, mix into the rice and keep warm.

Next, heat an electric skillet or a wok with 1/4 avocado oil to 400 degrees, then drain the steak marinade and dump the steak in, stirring and cooking 2-3 minutes until steak is no longer pink, and starting to crisp on the edges. 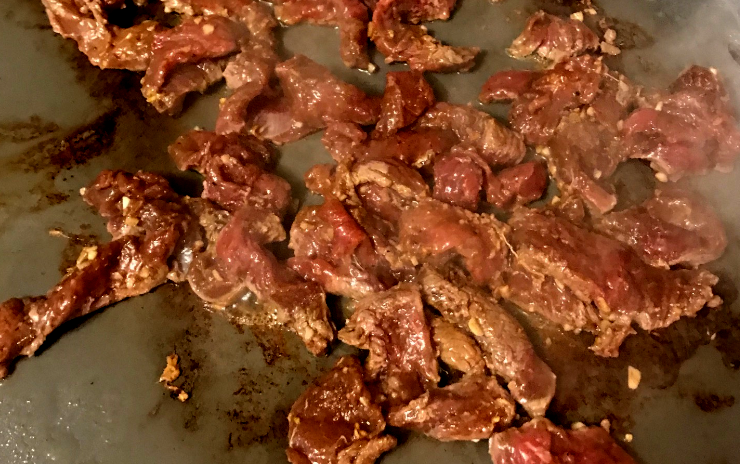 Add blanched broccoli once the steak is cooked: 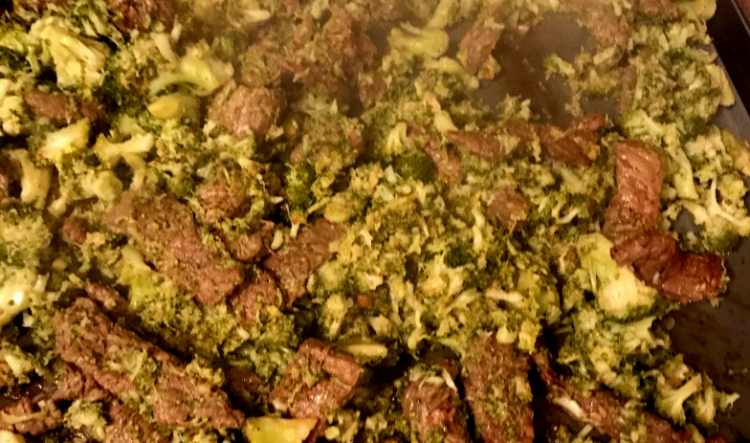 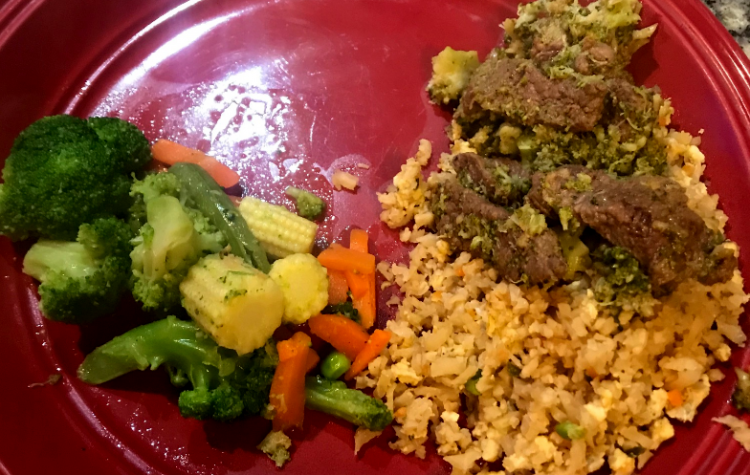 See the list of the Shirtless Chef columns/recipes at www.mysaline.com/shirtless.