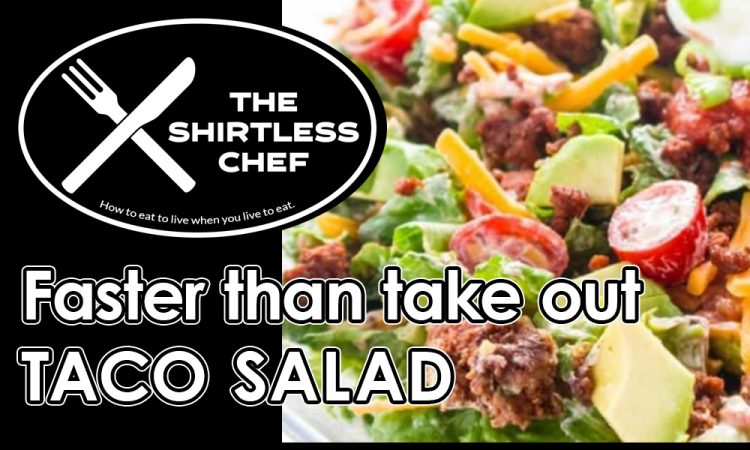 I know some of the recipes I have used for this article can seem a bit long and involved. Making every component from scratch instead of just ripping open a pouch will have that effect. So today, I thought I’d give you one of those quick weeknight dinners that is easy to make and that everyone loves – Taco Salad. In fact, if you make the pico ahead of time, I would bet by the time you ran to Taco Bell and bought salads for everyone, this would already be done and on the table. Also, this way your dinner will be what fast food take out salads almost always fail to be… healthy.

I haven’t been to any fast food places for over five years now. Doing a quick search on the interwebs, it turns out the Taco Bell Fiesta salad bowl has gone on to the great junk-food afterlife where it can’t hurt anyone anymore. I can’t imagine why a cornchip bowl/shell deep fried in the morning and then sitting around all day getting stale and greasy waiting for the dinner crowd fell off the menu.

A quick look at the nutrition for the dearly departed Fiesta Bowl Salad is surprisingly bad, even for what I was expecting. Calories clock in at 904! Total fat is 49 grams, 16 of which is saturated, carbs are 80 grams, and sodium tips the scale at 1,935 mg! Somewhere, there is a salt lick block sitting forgotten in a cow pasture reading this thinking “Dang! That’s a lot of sodium!” Those numbers are unexpected, like having an encounter with a moose in the wild. Those things are way, way bigger than you think, and it’s best to just hand over your wallet and phone without a fight.

I see the good folks at Taco Bell have replaced it with something called a “power bowl” but it also is a heavyweight with 520 calories, 54 grams of carbs, and 1200 mg of sodium. Not to mention, Taco Bell meat uses three – that’s right, count ’em – three different kinds of sugar in their meat. Maltodextrin, caramel coloring, and Trehalose. You thought you ordered a taco, but got a Snickers bar instead.

You also don’t need to bother with a store-bought taco seasoning packet. They manage to cram Soybean oil and two forms of sugar into those things as well. The second ingredient listed in Old El Paso taco seasoning is Maltodextrin, so sugar is the second most abundant ingredient in it. Before I educated myself on nutrition, I never would have guessed my tacos were full of sugar… unless I dropped my package of Cinnamon Twists on it. What are those things, anyway? I suspect styrofoam packaging dipped in cinnamon sugar, but that’s just a guess from memory. All you need is some simple spices you probably already have anyway: chili powder, cumin, cayenne pepper, onion and garlic powder.

I use ground turkey for my taco meat. It’s less greasy, has a mild taste that helps deliver the spice flavor we want, and let’s face it, turkeys aren’t as smart or as cuddly as a cow. The only trick is not to use 99% fat free ground turkey breast. That stuff is super dry and hard to cook with, stick to at least 93% with some dark meat ground in there. 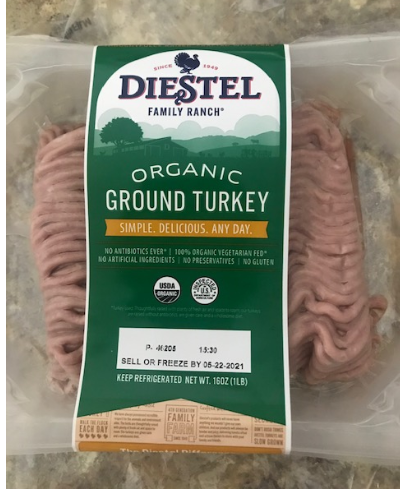 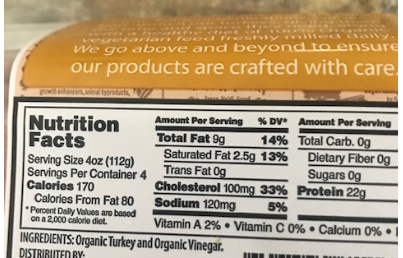 Pico is another of those items I see people buying pre-made from the store, but that’s just spinning the wheel of regret and possible listeria. Never let a factory cut your fresh veggies for you. It’s just a good rule to live by, and if you think you don’t have time, you can contemplate that while running to the bathroom sick for the next 24 hours after eating a bad batch of pre-packaged cut fruit or veggies. I like my pico chunky rather than watery, so I will seed the Roma tomatoes and get most of the juice out of them before chopping.

Jalapenos are also a crucial ingredient in homemade pico, and the great thing is you are in complete control of how much heat is in your pico. The actual fruit of a jalapeno pepper is not hot at all, it’s fruity and bright. The heat is in the white pith and some capsaicin is coated on the seeds, so if you like no heat, just split the pepper open and scoop those out before dicing. If you like your pico full 93 octane, chop it up seeds and all. You can also keep half or just a fourth, it’s completely up to you how high you dial the hot factor. Also, wear latex gloves while dicing peppers if you wear contacts, so that later in the evening you don’t accidently mace yourself and run around in circles screaming after touching your eyeball with fingers of fire.

I’ve found Primal Kitchen uses great ingredients for their salad dressing, so it makes my life easier to use their dressings instead of making one homemade. I am fond of this flavor for taco salads, but they have several to choose from and they are all good:

So next time you need a quick dinner that’s healthy and delicious, give this one a shot. You will find it’s much easier than running to town, and no bored or angry teenagers will have had their fingers near your food, which is always a plus in my book.

Spray a large, cold skillet with non-stick spray and add ground turkey, mash together with a large spoon and then set heat on medium. Once the meat starts to brown, add 1/2 tsp sea salt and black pepper. 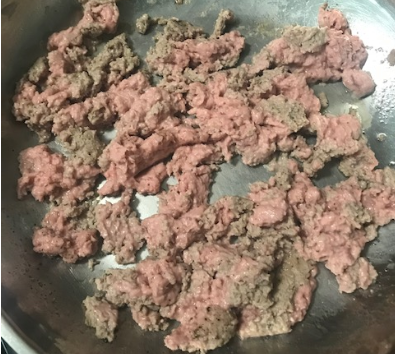 Once meat is almost completely cooked and most of the pink is gone, add the can of diced green chilies, and then bring to a simmer. Once the meat is cooked completely through, drain the meat well through a colander, squeezing with a serving spoon. Return to the skillet and add the season mix of chili powder, cumin, onion powder, garlic powder, and cayenne pepper if using. Add 2/3 cup water and mix until combined over low heat just until it thickens a bit: 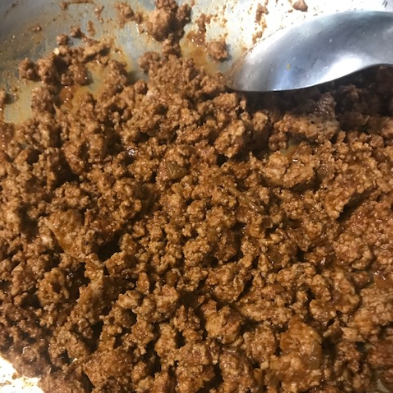 Serve over salad ingredients, or use a romaine lettuce leaf as a taco shell, and add toppings of your choosing.

Cut the tops off 5 – 6 roma, carefully use a knife to cut around the pockets to loosen the seeds and juice, turn upside down and knock out the juice and pith ,then rough chop. Finely dice the red onion, rough chop the cilantro, and dice the jalapeno peppers with or without the pith/seeds depending on how spicy you prefer. Combine in a large bowl with 1/2 tsp sea salt and the juice of 1/2 a lime: 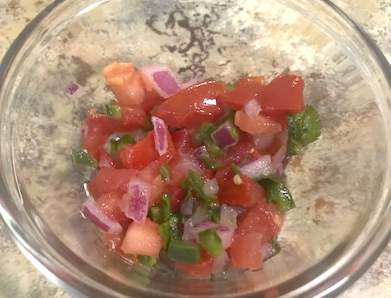 The toppings are only limited by your imagination.  I like Primal Kitchen dressing on the lettuce, crumbled black bean chips, diced avocado, shredded pepper jack or cheddar cheese, and plain grass fed yogurt mixed with lemon juice.  You can also use halved cherry tomatoes if you are missing the pico: 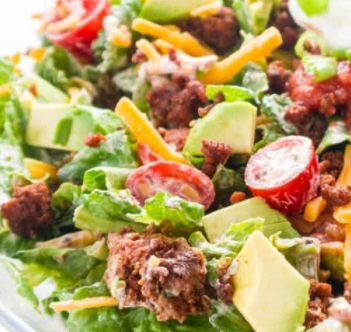