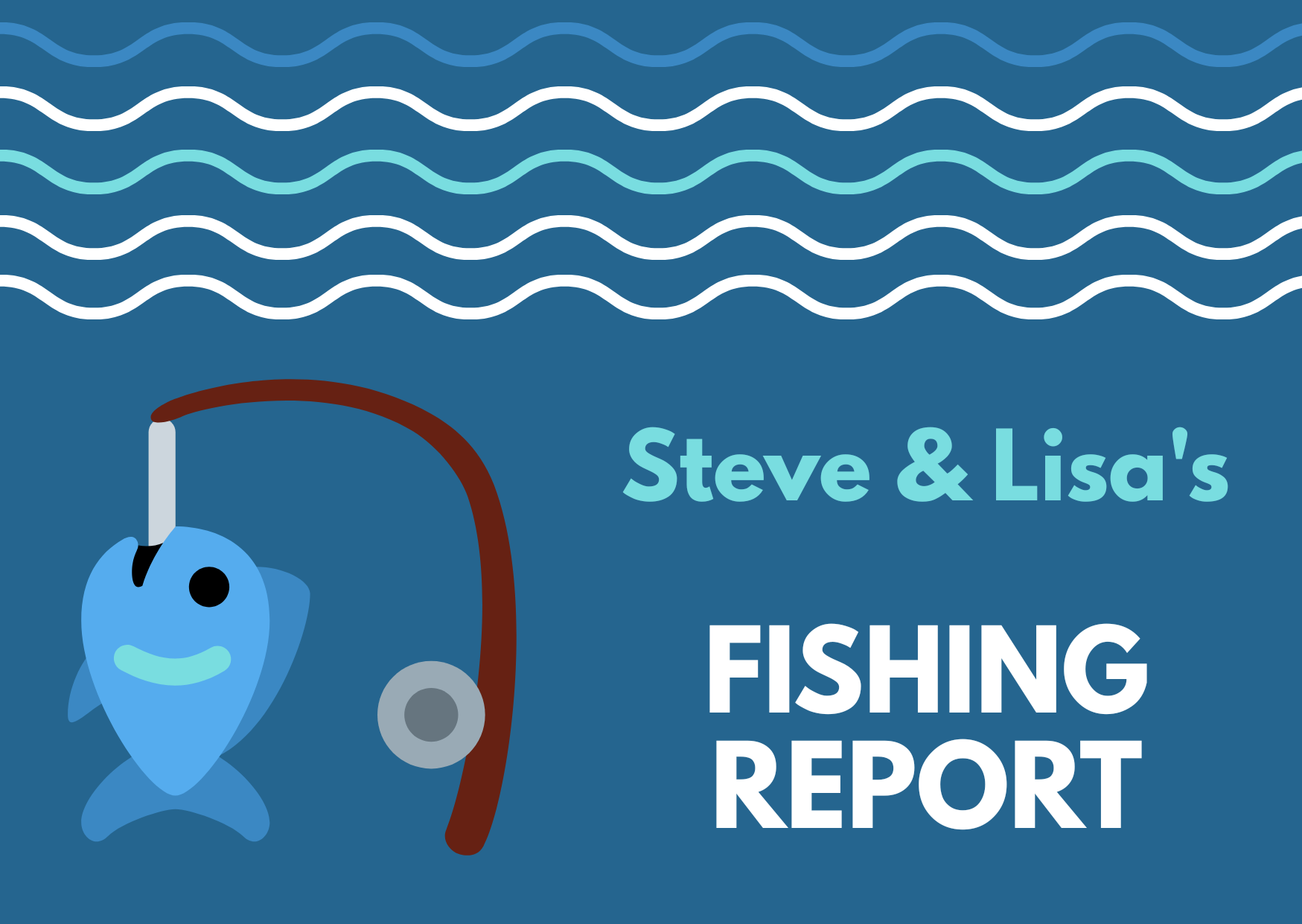 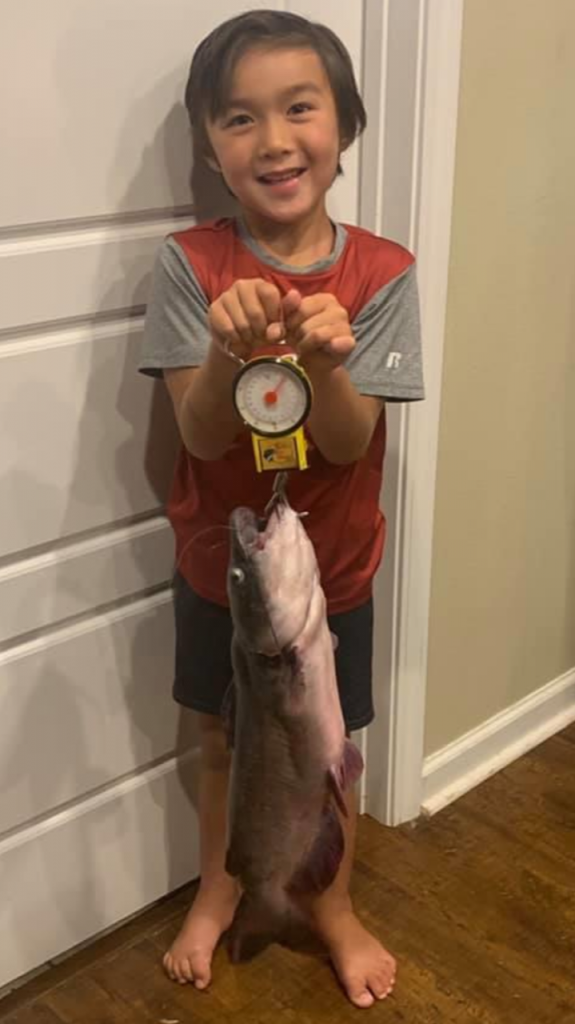 Owen Neihouse, 5yr old caught this 5lb catfish at Bishop Park Ponds while fishing with fresh chicken livers on the back pond. 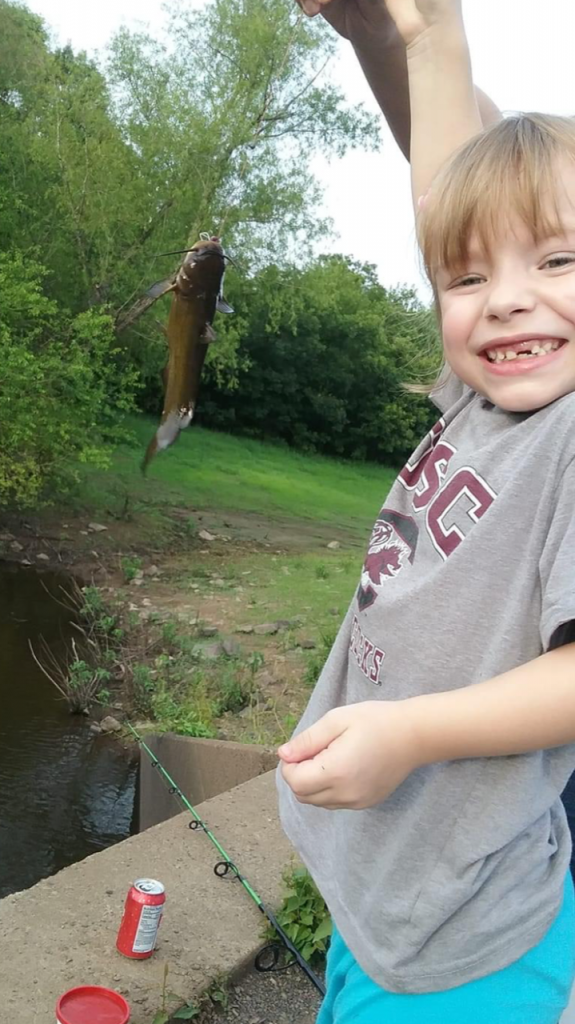 Saline River – Catfish have been doing good on trotlines, baited up with goldfish, black saltys and bream. Bass, smallmouth and large mouth as well as Kentucky have been doing good off of black salty’s, minnows, and zingtails, plastics in color green pumpkin and watermelon red. Crappie have been fair on #6 crappie minnows and on kalin jigs, especially Tennessee shad color, up on deep pockets and anywhere you can find some brush. Bream have been very good on crickets or superworms work good too on catching them, plus they last a lot longer on the hook than the cricket does and provides more fish just off of one worm. Gar are fun to catch and they are plentful as well. You can fray up some twine on your hook and throw a minnow on there and land one in when their teeth go to bite into the minnow and get the twine wrapped all in their teeth. 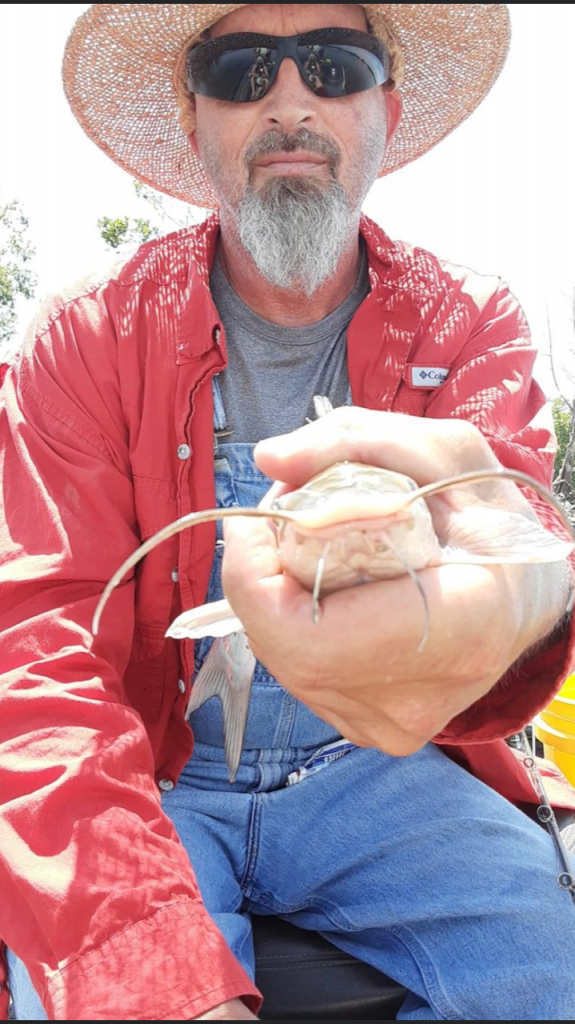 John Martin caught this catfish on the Arkansas River, Ozarks on chicken livers. 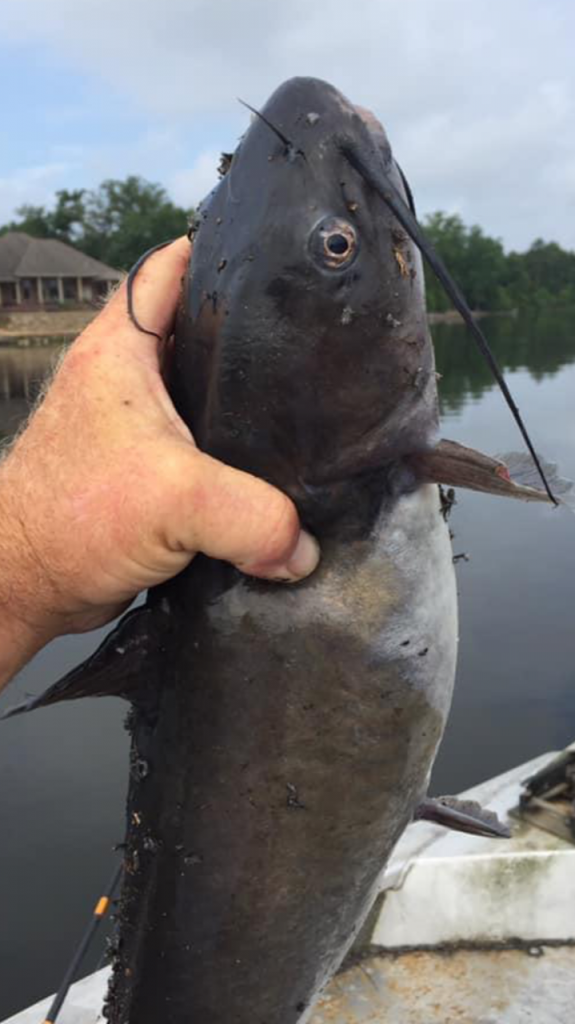 Neil Powell caught this 5lb catfish in the Village at Lake Sophia on crappie minnow.

Sunset Lake – Catfish have been hot everywhere especially here. Fresh chicken livers have seemed to be the most used in landing some good eaters. Some people have reported catching them also on bait shrimp and also on wild catblood stink bait. Crappie have been slow but a few have been caught off of #6 crappie minnows, especially early in the morning or right at dark. Bass have hit on some top water baits or plastic worms whacky rigged. But minnows or black saltys have also done some good for a few anglers. Bream have been very good the hotter the better, crickets, red worms, wax worms and super worms all have done good for many at Sunset Lake. 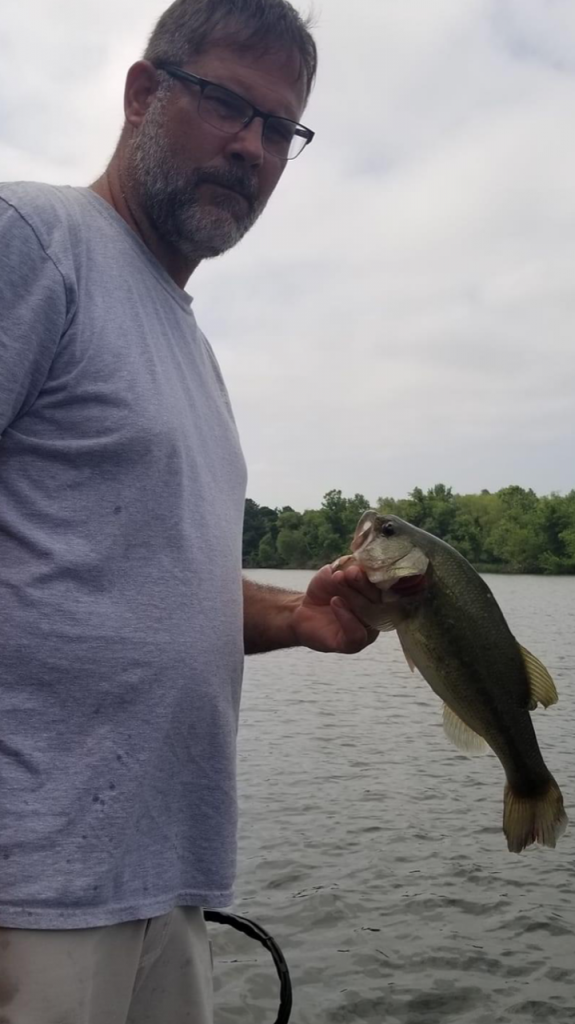 Kevin Rollins caught this bass on a jig while fishing on the Ar River at Maumelle Park. 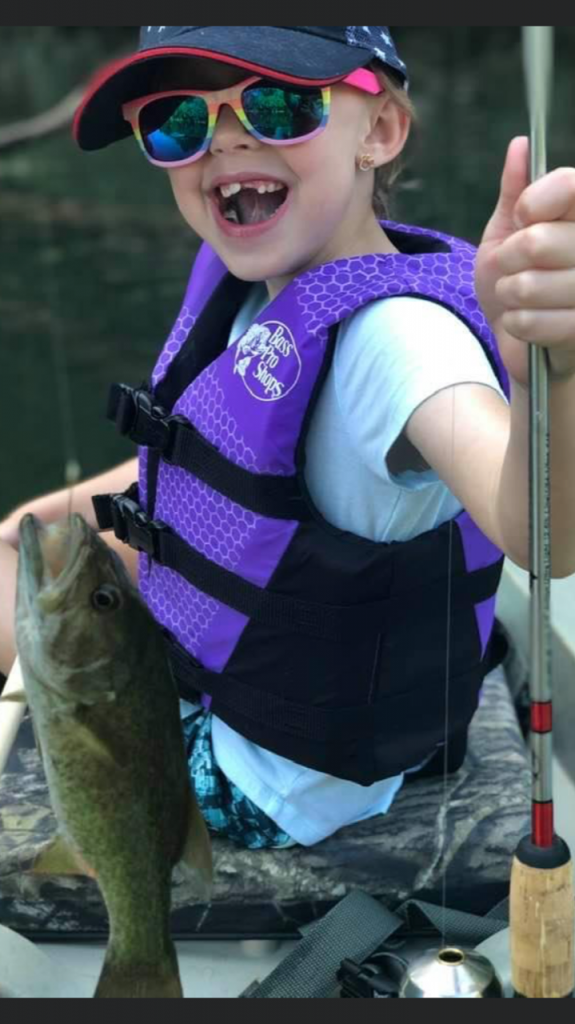 Addison Sparks, 7yr old caught this smallmouth on the Saline River on a cricket.

Lake Norrell – Catfish, yep doing great here as well. I must say that the catfish is hot everywhere. Black salty’s, night crawlers and cut bait has worked good here. Crappie has done fair on #6 crappie minnows especially late in the evening. One of my customers from out there had said lots of them around there have been putting out more structure for them. I know that out of the 35 yrs that I have been in business that this year has to have been the top year as far as catching good big crappie. Bream are excellent drop shotting with a cricket. There are some huge red ear at this lake. Bass been hitting minnows, black salty’s and plastics and spinner baits as well as buzz baits. 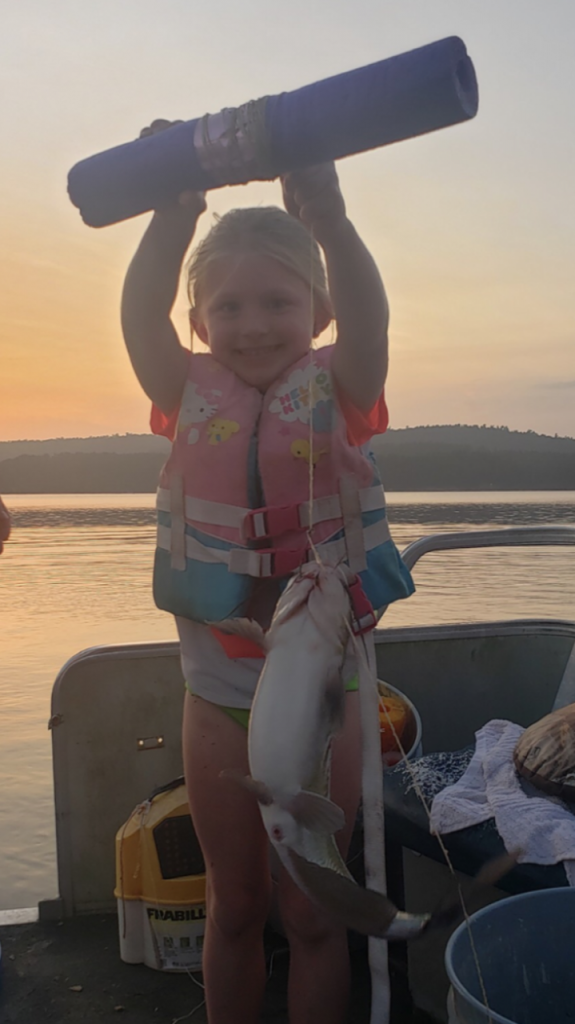 Jazmine Farr, 5yr old with a nice catfish caught off of a goldfish on a noodle while fishing Little Fir, Ouachita Lake. Shyann Farr, 10yr old also shows off another catfish while fishing with goldfish on noodles at Lake Ouachita.

Bishop Park Ponds – Here too the catfish have been doing great. Fresh chicken livers have been the key to catching them here. A few take the frozen skipjack and cut it up and fish for them also. Bass do good on black salty’s as well as on goldfish and also plastics fished whacky rigged. Crappie slow on #6 crappie minnows and assorted crappie jigs, early in the morning. Bream have been good everywhere on crickets especially here. Elizabeth Farr 13, yr old yes another Farr sister with another catfish also caught on noodles with goldfish at Lake Ouachita. Cassie Farr mother said they caught a total of 8 catfish all that size.

Lake Winona – Crappie have been slow, #6 crappie minnows have been catching some. Bass have been biting fair on minnows, spinner baits, Carolina and whacky rigged worms. Bream, fishing has been good with cricket and red worms. Catfish are bitting well in the late day until right after dark in shallow waters close to drop offs. Minnows, night crawlers, goldfish and fresh chicken livers fished right off the bottom are catching them. Ken & Jennifer Oswalt caught this catfish off a cricket while fishing at Lake Maumelle. 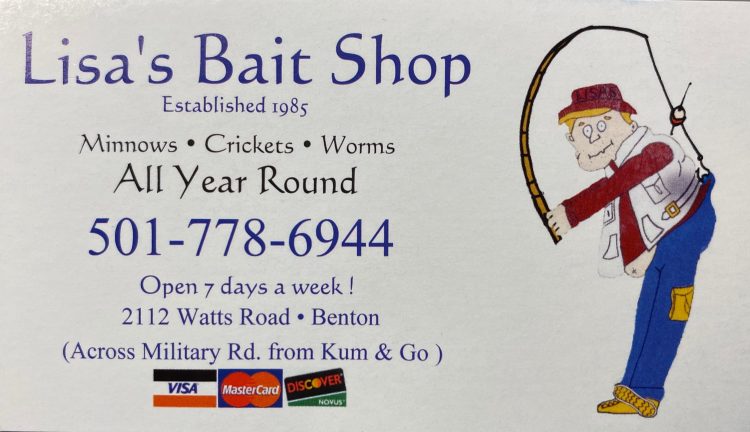