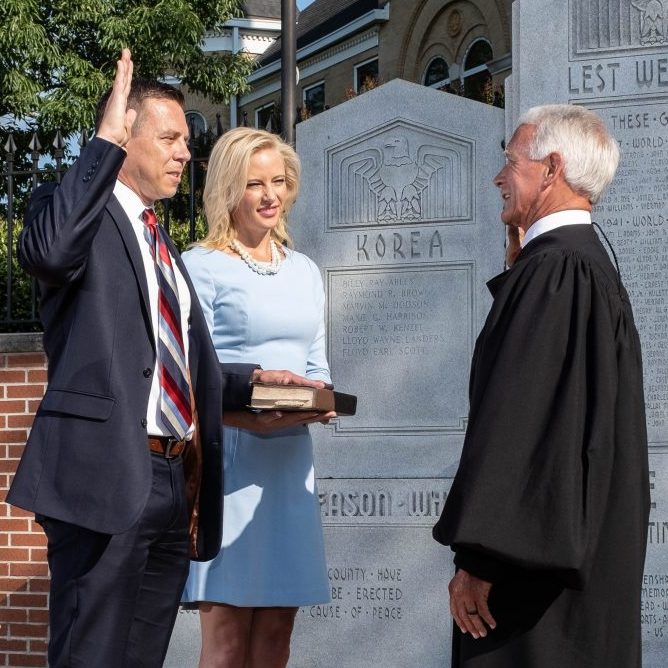 Newton swears on a Bible held by his wife Shannon, while Judge Arnold presides in the ceremony. Photos courtesy of John David Pittman

We can now say Judge Josh Newton, as he was sworn in Monday morning by Judge Gary Arnold at the Saline County Courthouse. Newton stood for his oath outside the courthouse at the Veteran’s Memorial with his family present. Governor Asa Hutchinson appointed Newton to serve out the remainder of Judge Mike Robinson’s term, since Robinson retired in June. Also present for the ceremony were members of Newton’s family, wife Shannon Samples Newton, son Nash Newton, age 12, daughter Nyla Newton, age 10. 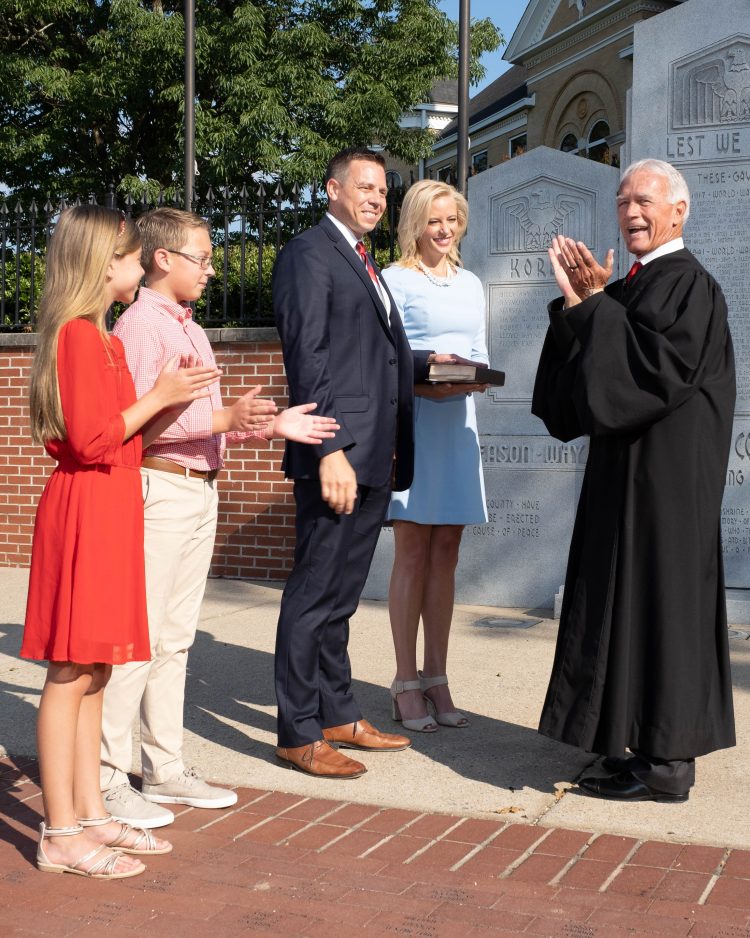 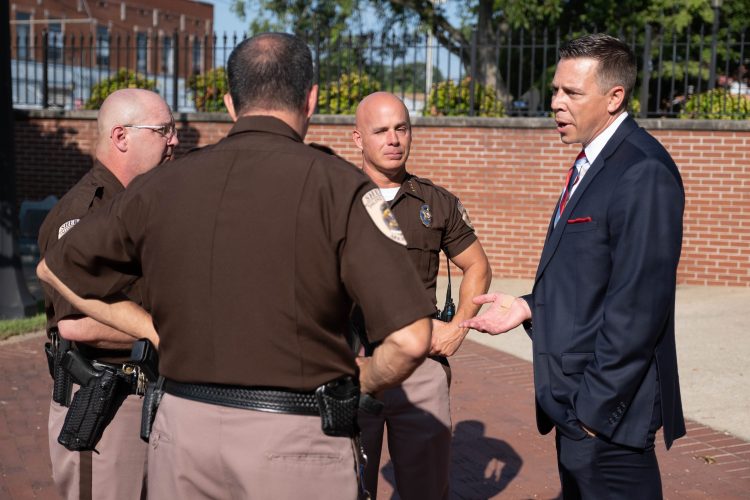 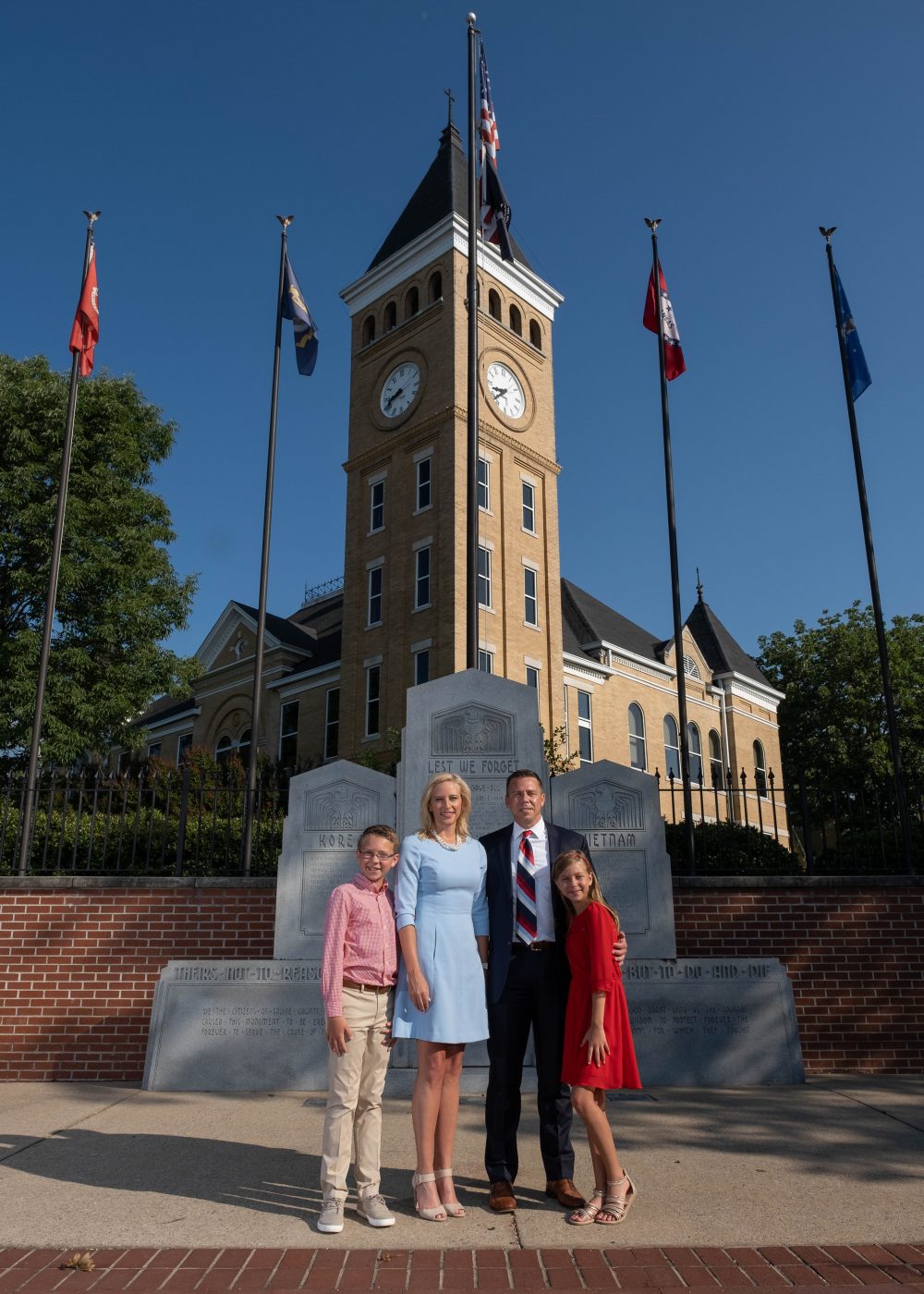 Judge Newton and family after swearing in ceremony.

Governor to Appoint Three Judges; One from Bryant 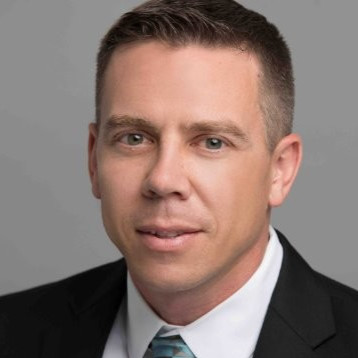 Governor Asa Hutchinson announced on Wednesday, May 8th his intention to make three judicial appointments – one of them from Bryant.

“I am confident that the background and experience of each of these men will serve them well in their respective judgeships,” Governor Hutchinson stated. “Throughout their careers, each has demonstrated a thorough understanding of the law and the skill and integrity to uphold justice in even the most complex of legal issues. I appreciate their willingness to serve Arkansas by accepting new challenges.”

Josh Newton, Bryant, as State District Court Judge for the 32nd District. Newton’s term will begin July 1, 2019, and expire December 31, 2020. He will replace Judge Mike Robinson, who has announced his retirement.

“I am truly honored that Governor Hutchinson has appointed me to serve as State District Court Judge for the 32nd District,” state Newton. “I have great respect for Judge Mike Robinson, and it is a real privilege to be chosen to succeed him upon his retirement. I will have big shoes to fill, and do not take this responsibility lightly. I look forward to serving our State and the citizens of Saline County, and will work hard to faithfully, justly, and honorably serve with honesty and integrity.”

Since 2015, Josh Newton has served as the primary attorney for the University of Arkansas System Division of Agriculture. From 2009 to 2015, Mr. Newton served in the Office of General Counsel in the U.S. Department of Agriculture. He has clerked for 8th Circuit Judge Lavenski R. Smith and federal bankruptcy Judge Margaret A. Mahoney. He is a graduate of the University of Central Arkansas and the University of Arkansas School of Law. Newton volunteers for Project Zero, a non-profit for the benefit of foster children; the prison ministry Angel Tree; and as a coach of youth sports in Saline County. He and his wife, Shannon, have two children, Nash and Nyla.

Gunner DeLay, Fort Smith, as Circuit Judge for the 12th Judicial District. DeLay’s term will begin July 1, 2019, and expire December 31, 2020. The 92nd General Assembly established this additional circuit judgeship for the Twelfth Judicial District by Act 1003. DeLay has served as district judge in the Fort Smith District of Sebastian County since Governor Hutchinson appointed him in 2018. He was a member of the Arkansas House of Representatives from 1995-1999 and a member of the Arkansas Senate from 1999-2003. In 2007, then-Governor Mike Huckabee appointed Mr. DeLay as prosecuting attorney for Sebastian County, where he oversaw the 12th Judicial Drug Task Force. Mr. DeLay is a lifelong resident of Fort Smith. He and his wife, Robin, have four children: Taylor, Gunner Jr., Caroline, and Suzanna.