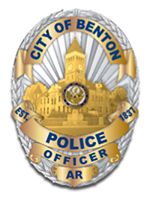 Since the start of Operation Medicine Cabinet in 2009, the Benton Police Department has collected nearly 5 tons of prescription medications. Those medications have been taken out of the path of those who might abuse or misuse them, in an effort to enhance safety in the community. The drug take back program also is an opportunity for people to have those medications disposed of in a manner that is safe for the environment.

“Operation Medicine Cabinet is an education program of how to keep your home safe,” said Benton Police Chief Kirk Lane.  “And the amount of medications we’ve collected is a measurement of how well we are getting the education out. We are also very proud to see so many parents bringing their children with them to show them the importance of Operation Medicine Cabinet, which we greatly hope will reduce the catastrophic statistics concerning prescription drug abuse, misuse and deaths associated with it.”

The Operation Medicine Cabinet event started in Benton after Russell Goodwin, owner of a local monument company and youth baseball coach, told Chief Lane that he was “tired of making headstones for children” he knew due to the abuse of prescription drugs. BNPD officers gathered data that showed there was a problem with abuse and misuse of prescription drugs by youth, including information from the Saline County Coroner’s Office which showed that 30 people died in 2009 as a result of prescription drug abuse.

There were just 146 pounds of prescription medications collected at the first Operation Medicine Cabinet back in the spring of 2009, but the program and education to the public continued growth. State officials took notice and the program expanded. In 2010, a coalition led by State Drug Director Fran Flener, Attorney General Dustin McDaniel and both Arkansas districts of the U.S. Attorney’s Office launched an ongoing educational program to encourage everyone to “Monitor, Secure and Dispose” of their prescription medications. The also launched the website www.artakeback.org.

On the heels of the success in Arkansas, including Benton, the U.S. Drug Enforcement Administration announced a nationwide prescription drug take back campaign. In May of this year, the DEA announced that 893,498 pounds of prescription medications were collected in all 50 states; 25,289 pounds was collected in Arkansas.

So why is the program so important that there is a nationwide campaign to collect old and unused prescription medications? Because the growth of prescription drug abuse and misuse has sharply risen throughout the nation to the point that the Centers for Disease Control and Prevention (CDC) has labeled it an “epidemic.”

According to the CDC, heroin use has spiked due to the increase of prescription opioid abuse or misuse, and states that, “94% of respondents in a 2014 survey of people in treatment for opioid addiction said they chose to use heroin because prescription opioids were ‘far more expensive and harder to obtain.’” The CDC also states that four in five new heroin users started out misusing prescription painkillers. In 2012, 259 million prescriptions were written for opioids, which is more than enough to give every American adult their own bottle of pills, according to the CDC. Drug overdose deaths involving heroin continued to climb sharply, with heroin overdoses more than tripling in 4 years.

“It is quite alarming that prescription drug abuse and overdose deaths continue to spike, but we are diligently working on finding ways to reduce this catastrophe,” Police Chief Kirk Lane said. “We can all play a major part in reducing these numbers by providing awareness of prescription drug abuse or misuse to the public, and by participating in Operation Medicine Cabinet. By collecting old and unused medications, and teaching the importance of locking up your medications you currently take, we can reduce those risks.”

Saline County residents have continued to take part in the Operation Medicine Cabinet events, collecting a total of 13,626 pounds since 2009. Of that total, 72 percent (9,873 pounds), was collected by the Benton Police Department.

About two-thirds of all prescription drugs (which also include stimulants such as Adderall and depressants like Ativan) illegally obtained are taken from people’s homes and not pharmacies or off the street.

“At the age of 18, my daughter knew four people that lost their lives due to the influence of prescription drugs,” said U.S. Rep. French Hill (R-Ark.) “This is a serious problem that deserves more of our attention. Prescription drug abuse has become an epidemic in Arkansas and throughout our country. I’m grateful for men like [BNPD] Chief Kirk Lane who leads on this issue.”

Returning your unwanted medicines to Operation Medicine Cabinet is the safest and most environmentally protective way to dispose of unused medication. Medicines that are flushed or poured down the drain can end up polluting our waters, impacting aquatic species, and contaminating our food and water supplies. Most medicines are not removed by wastewater treatment plants or septic systems. Scientists have found medicines in surface, ground and marine waters as well as soils and sediments in the Pacific Northwest. Even at very low levels, medicines in the environment hurt aquatic life.

Medicines are a special type of hazardous chemical which are not safe in solid waste systems and landfills. Drugs can be very toxic for people and wildlife, even in low doses. Just as we do not put used motor oil or leftover paint thinner in the trash, we should not put these extremely potent pharmaceutical chemicals into unsecure curbside trash cans.

If you have prescription medications needing to be disposed of, drop them off in the Benton Police Department’s 24-7 drop box, located at 114 S. East St. For more information about Operation Medicine Cabinet and for a list of locations across the state where medicines can be dropped off, visit www.artakeback.org or call (501) 618-8693.

To report suspicious activity, a crime or to receive information, call the Benton Police Department at 501-778-1171 or 501-315-TIPS. Individuals also may send us anonymous information to CRIMES (274637) with the keyword BNPD in the body of the text or go to www.crimereports.com to leave a tip. A crime tip can also be submitted via the official Benton Police Department app found on iTunes and Google Play.