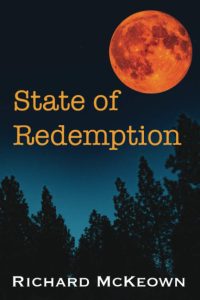 Ok, fellow readers! It’s week two of my “Support Your Local Author” campaign. I’m happy to say that I’ve got five books from five different authors, and all of them are different genres as well! Today, I present to you the political thriller, State of Redemption. I have reviewed another of Richard McKeown’s books in the past. He was generous enough to give me a copy of his newest release, and in my humble (but correct) opinion, it was the definition of a gripping story!

I am a sucker for a political/crime thriller. John Grisham, Michael Connelly, Lee Child, James Patterson, those are always easy reads for me. And I would totally put State of Redemption next to any of their popular novels. It is well written. The mystery is there. The lines are drawn between the good guys and the bad guys. It was a page turner in the truest sense. The story is told from multiple points of view (both “good guys” and “bad guys”) and even some flashbacks. However, Richard managed somehow to pull that off without being confusing or monotonous. You know sometimes when a story is told in multiple POV there are certain characters that you want to just skip over, but that isn’t the case in this story. I wanted to pay close attention to everything.

Our main character, Matt, has moved back to his boyhood home in Vermont after suffering the loss of his wife and child. As he reacquaints himself with his old stomping grounds, childhood memories take a sinister turn and he finds himself in the middle of a dangerous search for justice. Matt was immediately a likable character. And his sidekick, Marianne was strong and smart. I loved her. And her grumpy, elderly mom was a total scene stealer. Somehow, the stubborn old lady became one of my favorite characters. Then there’s Tommy, a district attorney running for governor, who immediately gave me an icky feeling. Classic sleazy politician with some dark skeletons hiding behind a pristine reputation and a seemingly perfect family. And opposite of how I felt about Marianne’s mom, Tommy’s campaign manager was super slimy and did not win me over. With such rich characters and a plot that kept me intrigued, it really had everything I love in a book like this.

Even though this wasn’t a “ripped from the headlines” story, it’s a familiar one. And I thought it was extremely well executed on the page. It was so easy to read and so satisfying from start to finish. If you’re into crime novels, political thrillers, procedurals, or just a well written story that will keep you on the edge of your seat, I cannot recommend this one enough.