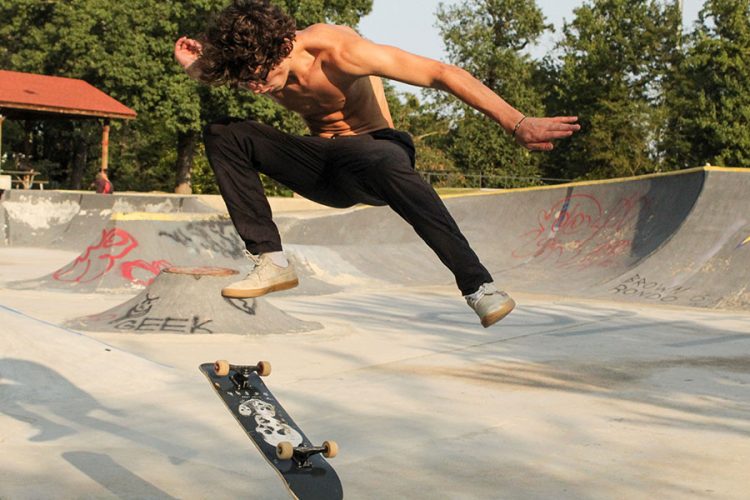 Toward the end of his skate session at Kanis Park Sept. 19, sophomore Sam Peck attempts to land a dolphin flip. Peck first learned the trick a year ago. “It took me a few hours, because I was completely new to that trick,” Peck said. (Photo by Kaycee Browning)

This story was originally published on Prospective Online, the Bryant High School student news website by Kaycee Browning on November 10, 2020

Delinquents. Lazy. Potheads. The stigma surrounding skateboarders has been a prevalent misunderstanding for years.

But there’s a certain courage and dedication that is fostered by people who skate, and it pushes them to spread their love for the sport. Sophomore Sam Peck has been actively skateboarding for four years and has discovered that dedication, prompting him to work toward making a skatepark in Bryant a reality.

“Ever since I started skateboarding, I’ve been in love with it,” Peck said. “I get feelings sometimes after watching skateboarding videos, and it makes me want to skate really bad, but we didn’t have any good street-styled skate parks. So I thought about it and talked with my mom, and [a petition] is what I came up with as the first step to try and spark up an interest.”

Peck shared the petition to build a street-styled skatepark at Alcoa Park on his social media. It rapidly spread, gaining 1,000 signatures in three days and surpassing its goal with a total of 1,050 signers.

“After the petition exceeded its 1,000 signature goal, I was invited to a meeting with the mayor [Allen Scott],” Peck said. “I presented the idea to a room of about 50 people, but after that, basically everything stopped because of COVID-19. About a month ago, I emailed [Bryant Parks and Recreation Director] Chris Treat and got a virtual meeting with him, and got it all started back up.”

Treat is the catalyst for the production of the skatepark. A decade ago, an attempt to build a skatepark in Bryant was interrupted because of a lack of money, but Treat is confident that they will find sources for funding this time.

“We have the land, support from Mayor Scott, and key stakeholders in the community,” Treat said. “It will take time and patience as we pursue several sources, and projects like this need to stay a priority, which takes folks like Sam moving the project forward.”

There are several ways to approach getting a public park designed, but Treat says raising awareness of the park and keeping the community involved are consistent factors in designs that are successfully constructed.

Read more news related to the proposed skate park in links at the end of this article.

“The Alcoa skate park is the best way to get a public park designed and built because it is driven by the residents,” Treat said. “The Parks Department does its best to listen and respond to the desires of the community. It’s difficult sometimes to know those desires, but that’s not the case with the skate park. Sam has done a tremendous job raising awareness for this park and it’s our job to help make it happen.”

According to California Skateparks, BMX and skateboarding are two of the fastest growing activities in the United States with more than 14 million participants. These sports provide a healthy physical activity for kids not interested in traditional team sports and help eliminate boredom. Nick McGooda, owner of “2% Skateboards,” has been participating in the sport for 25 years and has experienced the long-lasting positive effects.

“It has introduced me to countless amazing people who love this as much as I do,” McGooda said. “It has given me an outlet that has kept me out of trouble and helped me progress in many different ways, including getting me out of my shy phase, showing me how to trust myself when times may be questionable and how to get back up when life decides to knock me down.”

Being an active member of the skate community has made McGooda a witness to the positive changes it can create.

“More people see it as a way to express oneself and not so much just playing with a toy,” McGooda said. “More individuals have seen the opportunities the skate scene has to offer and that has caused more people to give it a try and show it support. What has not changed is the love and appreciation people have for it who really take it seriously and all the positivity and community and support it brings to the table.”

Peck has experienced the same impacts, noticing several changes in his perspective on life. According to Ever Skate, a website dedicated to sharing skateboard-related content, the biggest benefits include overall fitness, physical endurance, flexibility, precision and stress relief.

“An important thing skateboarding has done for me is teaching me great perseverance,” Peck said. “You fail more than you succeed sometimes, especially in the beginning. When you get up after a bad fall and you keep trying, that is perseverance in full effect.”

The Alcoa Skatepark will be officially added to Bryant’s council and committees plan in October and begin production, which will take up to five years to complete.

“I really, really want to name the skatepark after my father who passed away almost six years ago,” Peck said. “‘Vassar Park at Bryant’ would be ideal. Vassar was his middle name, and he was so supportive in everything I did. it would absolutely mean everything to me if that is the name of that park. I know he would love seeing what I’m doing today, so I really want to honor him in this way.” 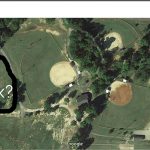 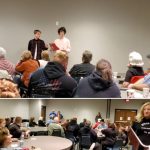