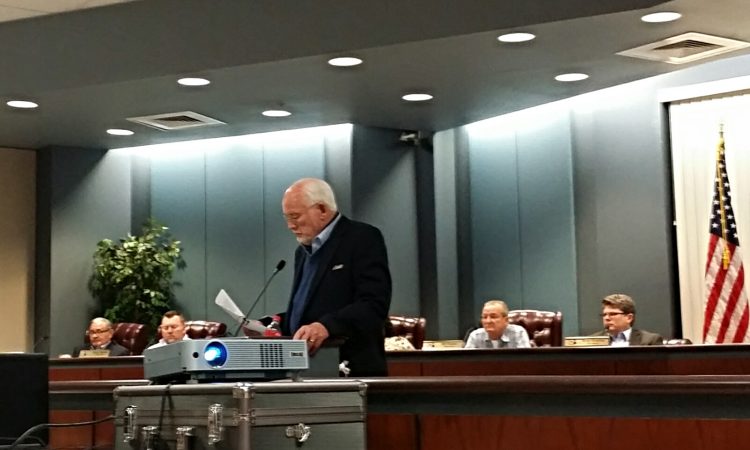 On Monday night, February 9th, 2015, the regular meeting of the Benton City Council was held. Mayor David Mattingly proclaimed Feb 15-21 Benton Athletic Memorial Museum Wall of Fame Week. He then gave the State of the City speech for 2015. The speech included highlights of the past couple of years, with emphasis on street improvements, parks & new business & residential developments.

“Yes, a new Kroger Marketplace is coming, Academy Sports is coming,” stated Mattingly, “and some exciting new restaurants which I cannot tell you about, but let your imagination be your guide.”

See the full State of the City address in the comments section of this blog.

(Stop this video at about 13:00 and go to the one below it for much higher quality on Riverside Park flyover presentation)

More info below from the archived comments section:

Yes sir. And the entrance to the park will be between Holland Chapel and the Saline County Fairgrounds.

Comment by Andy Pierce on February 11, 2015 at 1:58pm
Thank you Shelli, so its the old airport. Makes sense to combine it with the Holland Park fields. 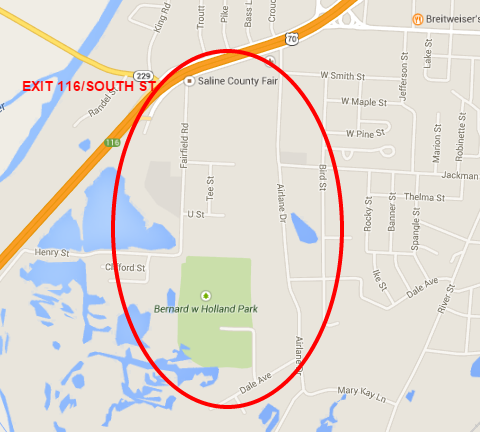 The flyover video is impressive even with a few flaws.

Wow! Four years have come and gone, it doesn’t seem possible. My second term began January 1, 2015, and I think I have finally figured out the main parts of my job description. It’s not really that complex. In a recent presentation I gave at the CADC Conference, I had the opportunity to speak about “What is Leadership?” I emphasized in that presentation the following key components and reiterate today in this message how strongly I feel that if people are going to accept you in a leadership role, the following fundamental characteristics are essential.

Why do I tell you all this? What has this got to do with the state of your city today? With the support of this community, the city council and my staff, some important ballot initiatives were passed, which created opportunities to foster an environment where economic development is now flourishing in Benton.

Here is a snapshot of what we have accomplished during my first term in office. Repeating what I said last year: the Benton Event Center opened, Military Road expansion/renovation was completed, South Street saw improvements, the splash pad was installed at Tyndall Park, the dog park was built across from Sunset Lake, and equally as important, we launched a new City of Benton website. Additionally, the City of Benton was named “Volunteer Community of the Year” for the fifth time in the last six years, won a City of Distinction honor for our Riverside Park design, upgraded security measures at City Hall, and was one of the first cities to institute a document retention program, which complies with IRS, Federal, and State requirements.

At that time I told you to “hold on” because 2014 was going to be even more exciting. And guess what, it was! Here are a few of the improvements in your city in the past year. The Fairfield Inn & Suites by Marriott opened in September, site preparation work began on the Hurricane Creek Village Shopping Center at Exit 121 for a new Kroger Market Place, Academy Sports and exciting new restaurants. The Links at Longhills are beginning to see activity, the final design and street work is about to begin on the Riverside Park Complex, site preparation should be complete and building should begin late in the year. The City of Benton now has a Facebook page, and if you think that’s something, look up www.BentonProud.com and see our new blog with great stories about our community and all the exciting things going on in your town. The City of Benton also signed up to be the lead agency on the Alcoa Road project to expand Alcoa Road to four lanes. That’s a snapshot of what happened in 2014 and will continue throughout 2015!

Get ready to double down. In addition to what we’ve already said will happen this year, we’ve also committed over $1.5 million dollars for street and drainage improvements, and new lighting at the Bernard Holland Baseball Complex. With the public safety tax kicking in, AWIN radios are being purchased for improved communication in the police department; the addition of six new police officers and six new fire fighters, along with the necessary equipment, acquisition of land for a new Fire/Police substation, and a new pumper truck, which will be ordered by mid-year have become a reality. With the passage of the alcohol ordinance, our city clerk will be issuing alcohol permits, and the activity for our Community Development Department can be seen clearly in the attached report showing the number of building permits issued in 2014. The Human Resources Department is working on introducing a new electronic time-in-attendance system; and with their assistance, we were able to secure an agreement with the Municipal League that our workers’ compensation and healthcare rates will not increase in 2015.

While all of this is going on, I am proud to say that once again all of the Department Heads, who provide the daily services to our city, deserve a thank you for the effectiveness in which they execute their job responsibilities. Additionally, I am pleased to announce we have once again operated with a balanced budget and demonstrated a strong commitment to fiscal responsibility in utilizing taxpayer money. All the departmental reports for the year 2014 are attached to this State of the City document.

If it sounds exciting, it has been! I feel honored not only to give this report, but to have been fortunate enough to be recognized as your leader. I look forward to us accomplishing many more things over the next four years – Be Benton Proud!