God will not lead you between a rock and a hard place, and other lies I’ve believed.

When I was doing the wrong thing, I kind of expected things to go awry. I knew I would reap what I sowed. But, once I followed God… wouldn’t things work out?

God Himself led His chosen people into a spot in the wilderness along the shore of the Red Sea. People who had spent years in slavery in Egypt. Miraculous signs and wonders and plagues led to their release after hundreds of years in slavery. And the place He took them (on purpose) was into a nook that would trap them between a thundering fleet of chariots and an impassable roaring, deep sea.

“I have planned this in order to display my glory…” that’s God talking. And so the Israelites camped out in this spot that looked unfavorable. Millions of them. Mommas and babies and young and old and strong and weak. Animals. Carts brimming with belongings. Millions of humans.

When the Egyptians showed up in all their might on the fastest chariots in existence, God’s people lost their confidence. Moses told them they only needed to be still. But what did God say? 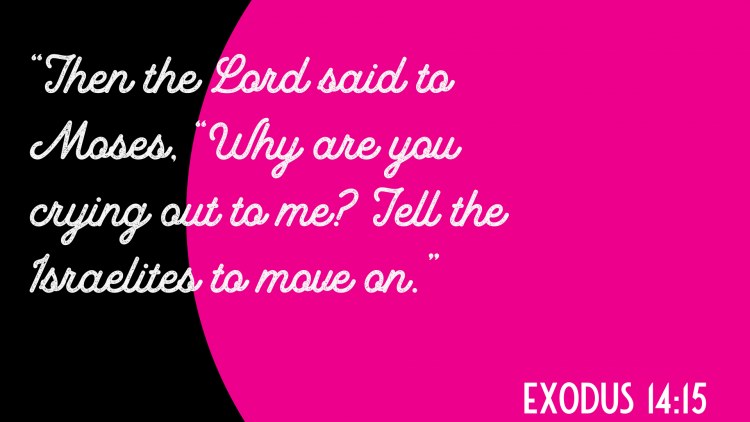 God had a different command.

“Why are you crying out to me? Tell the people to get moving!” that’s God talking in Exodus 14:15.

Get moving. Keep going. Press forward. Have you ever followed God’s voice, His ways and it looked like you were painted right into a corner? I have. It looked like He was asking me to go to a place that didn’t yet exist. To trust Him.

To the outside, these spots next to the Red Sea look like foolishness, like you missed it. Like maybe you’re not following God, after all. You must’ve got it wrong. You did the right thing and this is what you get? You step out in faith and it looks like you fell and failed.

Today, don’t lose heart. Finish the story. God is in the business of making a way where there is no way. Trust where He leads.There is no greater wisdom that trusting the future and the next steps to a God who both knows all things and loves you perfectly.

There is no magic formula: there is a time for standing firm and a time for moving forward. And there’s only one way to know which to do when: relationship with Him.

Practically, that looks like reading His word, taking time to worship Him and taking more time to listen to Him.

Practically, that sounds like my prayers being more about what He is saying to me than what I think I want or need form Him.

Practically, that feels like doing things that don’t make sense by the standard’s of this world.

God can and will and does make sense out of every place He leads His beloved. He just needs one thing: our obedience.

Amanda Elliott is a grateful believer in Jesus Christ, wife, mom, business owner and Benton resident. She believes we are each “built to battle” by a perfect creator who made us with a capacity for victory, a handbook for success (the Bible) and a spirit who empowers us to live in peace and joy. Follow Amanda Elliott’s “Built to Battle” column at www.mysaline.com/amanda.