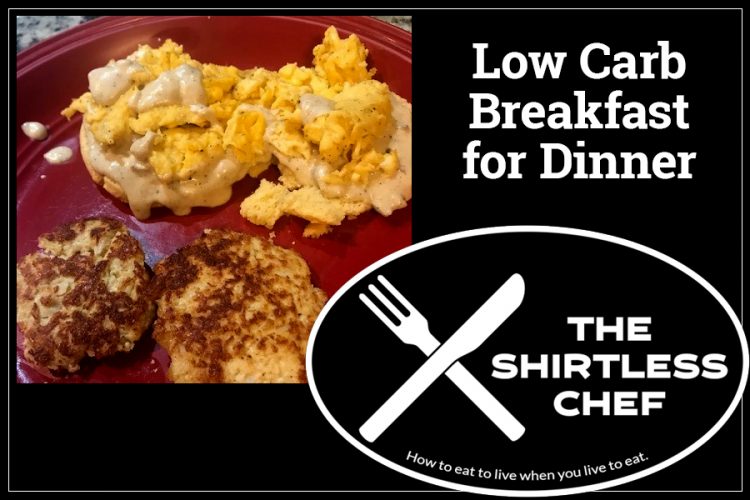 When you’re done with this recipe, see the others from Jason Murphy a.k.a. the Shirtless Chef, at www.mysaline.com/shirtless

Does it ever hit you when you have had some regular action or occurrence in your life, and then months or years later realize it’s gone? It could have been the smallest of things, and it happened so often you took it for granted. Then when it stopped, it did so not with a bang, but with even less than a whisper. It disappeared without you even marking its absence, sometimes not until years later. And if you had known at the time, you would have been emotionally struck by it, and stopped to truly take in every moment of it. You would have felt the complete impact of just how much you would miss it, and feel that odd mixture of the happiness of having it while mourning the loss of it in your life.

I’ve had several of those dawn on me recently. Watching my youngest son stroll to his room with just a nod towards me, now 16 years old and taller than I am. and suddenly I think of all the times when he was little and would ask for a horsey ride on my back. Those requests would usually come at the end of a long day, when I was tired and had just settled in to relax, take a breath, maybe watch some tv. I would sigh to myself, then somehow muster the energy to slide off the couch into the floor, and carry him around until my knees would give out. That happened almost daily. Then one day, he asked for the last time, without either of us knowing it was the last ever horsey ride.

And that was the end of that activity, that era, that bond between a father and young son as he took one of many tiny steps to growing up… and away. I wonder, if I had known at the time, how would I have reacted? I’m sure I would have crawled until my bones turned to dust and I could no longer physically move, and every laugh and squeal of delight in my memory as I bucked and jumped around the room. But, I didn’t know, so I didn’t mark anything of note, and maybe I was a little more tired than usual that day. Maybe I only did one pass around the living room and told him we’d do it more later. Then later never happened, and all those horsey rides fade a little more in my memory each day. The actor Brandon Lee said on the set of The Crow movie that people look at the full moon without wonder, but how many more times would they actually see it? 10, perhaps 20, yet it all seems limitless. A few weeks later he would be gone after a tragic on-set accident took his life. I hope he truly saw the full moon one last time before that happened.

My grandmother passed a little over a year ago, and besides being the absolute nicest person I’ve ever known, she was also a great cook. As a kid, I would love to spend the weekend just so I could have the big country breakfast she would make each day, even willing to brave the wrath of the scary grandfather to get those wonderful smells and tastes. My last ever breakfast there at her house came and went without so much as a ding from a counter bell to mark the occasion. Then, like my son, I grew up just fractionally enough that day that it was on to other things, and that would be my last time at her table, hearing her silly and fun remarks while eating platefuls of the best breakfast ever. I wish I had known then, or could tell her now, exactly how much I loved those mornings.

Being in the south, a big breakfast is tradition, and giving those up is an ask I bet not many are willing to do. I decided I wasn’t either, actually, but I also didn’t want to give up my weight loss and new fitness levels. Also, as an adult, it would truly hit me how awful I’d feel the rest of the day after eating a huge traditional southern breakfast. Just sit outside any popular breakfast place in town and watch. Those people stumble back to their cars with the energy of a Cape Buffalo that had just been hit with 5 tranquilizer darts by a NatGeo research team. They can barely muster the energy to lift their feet, despite just having consumed easily 1000 calories or more. This giant breakfast tradition is also why many people in the south have to take note of the shoes they put on in the morning, because that’s the last time they will see them until they come off in the evening. It’s the reason why the Tilt-A-Whirl rides at fairs around here are all Tilt and no Whirl. I was no different at one point.

So, I have searched and experimented and found a way to have that breakfast without it being a gut bomb full of empty calories and simple carbs. I enjoy it best as breakfast for dinner, because who doesn’t love that? Give it a try and see how you like it. If you are on a health or weight loss journey, maybe I can give you back that breakfast tradition every once in a while, before you had even realized it was gone.

I have biscuits and gravy with hashbrowns here. I figured you all know how to make the eggs that go with it, any style works, really. I also like Applegate frozen turkey sausage links for a leaner and tasty version of a breakfast sausage to pair with this breakfast. Remember, the cleaner and more simple the ingredients, the better it will be for you. Buy pasture raised eggs, and heritage pasture raised pork bacon free of nitrates and added preservatives to keep the nutrition up. An example, this is how all your popular big business bacon ingredients will read:

Do you see what’s wrong with that picture? Here’s all your bacon needs:

So choose wisely, experiment, and I hope you enjoy. And whatever small thing that feels limitless to you, that might even seem like a bit of a chore, take it all in. Be there in the moment, live in it like it might not come back. You might not realize how much you’ll miss it.

Gently melt the butter/ghee in a saucepan over medium low, then remove from heat to cool slightly. Whisk the dry team ingredients together in a large bowl. Whisk the room temp eggs in a second bowl, then whisk the sour cream into the eggs. Slowly drizzle the cooled melted butter into the egg mix, whisking constantly: 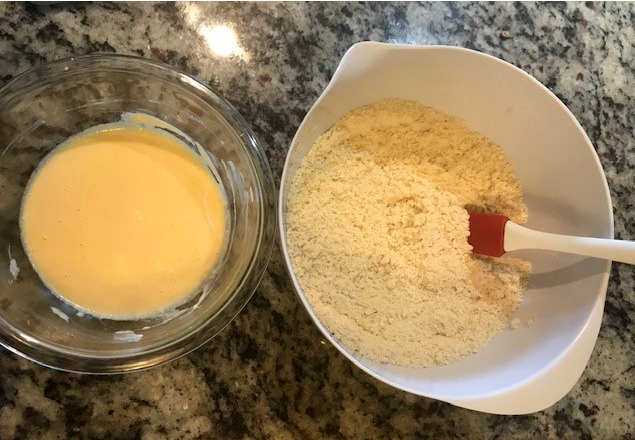 Then pour the wet team onto the dry team and mix with a spatula until completely combined. Use a large ice cream scoop sprayed with a bit of non-stick to portion out the biscuits onto a cookie sheet lined with parchment paper. Make sure the ice cream scoop is tightly packed. 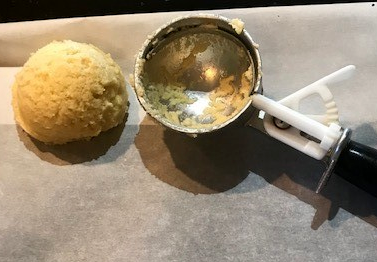 I also will wear disposable latex gloves with some non-stick cooking spray on them to shape the biscuits after they have been portioned out: 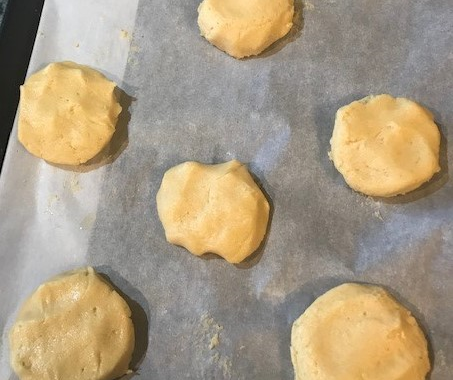 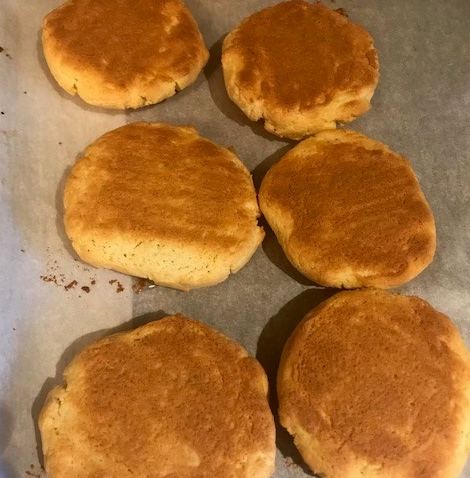 Cover with tea towels to keep warm while making the gravy and hashbrowns.

Start the bacon in a cold 10 inch cast iron skillet, cooking until bacon is crisp. Reserve about a tbsp of bacon fat, then add the butter. Once it is melted, add the chickpea flour and whisk constantly until the flour is cooked and a pale rue has formed: 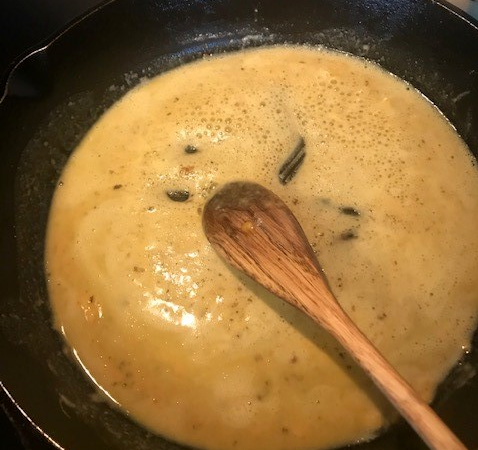 Add the cup of half & half, whisking constantly until it starts to thicken. Then slowly add more half & half until you get the desired consistency of gravy you prefer. Add sea salt and pepper as needed to season. I like a peppery gravy so I will grind a lot into mine: 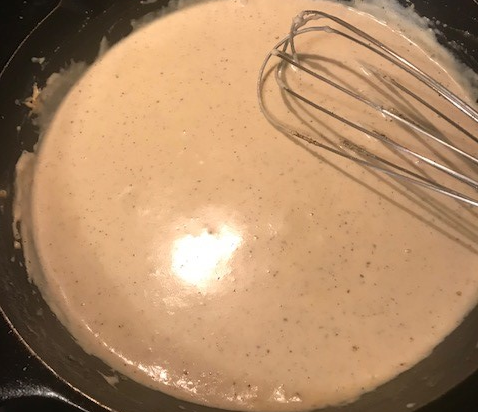 Crumble the cooked bacon into the gravy and it is ready to eat.

Stir fry the cauliflower until soft in a large skillet until all moisture is gone. Whisk the egg in a large bowl with the seasonings, then stir in the cheese. Dump the cauliflower into the bowl and mix completely. Using a large cast iron pan or large electric skillet, heat the avocado oil to 375 degrees. Wearing gloves with some non-stick spray again, grab some of the mix and shape into flat rectangle like shapes and fry a couple of minutes on each side until golden brown and delicious: 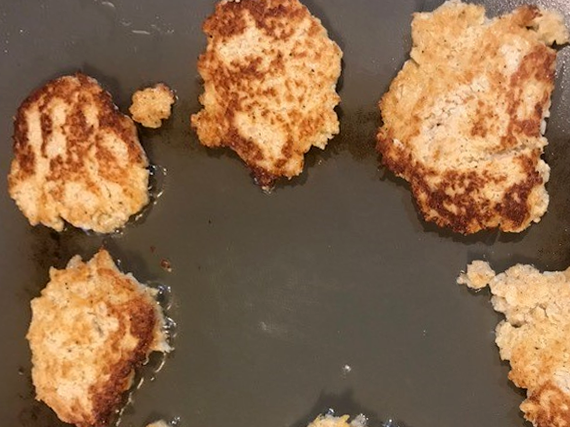 Serve with eggs prepared to your choosing of style, works great with scrambled, fried, or poached: See more of the Shirtless Chef recipes at www.mysaline.com/shirtless.