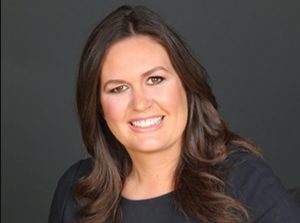 In a video, Sanders noted the important role our governor will have defending Arkansans with the radical left now in control of Washington, and outlined her vision for increasing freedom, security and prosperity in our state. Included here are some key excerpts, or you can click below to watch the announcement video. 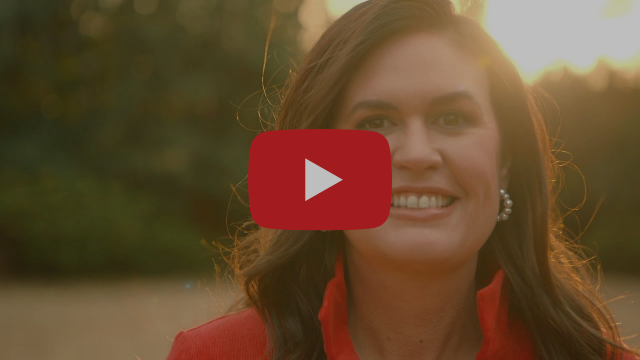 Defending Arkansans
“Everything we love about America is at stake – and with the radical left now in control of Washington – your governor is your last line of defense. In fact, your governor must be on the frontline…Our state needs a leader with the courage to do what’s right – not what’s politically correct or convenient…So today, I announce my candidacy for governor of Arkansas, and ask for your prayers and support.”

Freedom and Civility
“I was the first White House press secretary to require Secret Service protection because of a credible violent threat against me. We’ve seen violence in our streets, at a Congressional baseball practice, and our Capitol. This is not who we are as Americans. To remain free, we must have law and order and resolve our differences peacefully. The radical left’s ‘solution’ is to impose government control and censorship from the top down. But their socialism and cancel culture will not heal America – it will only further divide and destroy us…I will defend your right to be free of socialism and tyranny, your second amendment right to keep your family safe, and your freedom of speech and religious liberty.”

A New Generation of Leadership
“The real test of a leader is not the way you handle the issues you know are coming – it’s rising to the moment in a crisis you can never plan for. I have been tested under fire, successfully managing one crisis after another in one of the most difficult, high-pressure jobs in all of government… enduring relentless attacks, but getting the job done…As your governor, I will not be intimidated by the serious challenges we face. I will courageously lead.”“I will stand with our brave law enforcement officers…prohibit sanctuary cities…and fight back against the radical environmental policies like the Green New Deal that threaten to destroy so many jobs. I will take on the bureaucracy, reduce the cost and size of government, and make it accountable to you. I will lower the state income tax to reward hard work, allow our businesses to compete, grow, and prosper, and create more good jobs. I will champion good schools and good teachers, but also offer more choices to parents of kids in failing schools. Every child must have the opportunity of a quality education – and no child should ever be trapped in a life of poverty and despair.”

“We will succeed, but only if we the hold the line against the attacks on our freedom and push forward with fresh ideas under a new generation of leadership… As governor, I will defend our freedom and lead with heart…”

More about Sarah
Sarah Huckabee Sanders served as White House press secretary for President Donald J. Trump from 2017 to 2019. A trusted confidant of the President, Sarah advised him on everything from press and communications strategy to personnel and policy. For two and a half years, Sarah worked closely with the president, battling with the media, working with lawmakers and CEOs, and accompanying the president on every foreign trip, including dozens of meetings with foreign leaders. Sarah is only the third woman – and the very first mom – to ever hold the job of White House press secretary.

Upon her departure from the administration, President Trump described Sarah as “irreplaceable,” a “warrior” and “very special person with extraordinary talents, who has done an incredible job.”

Sarah joined the Trump campaign as a senior advisor in February 2016 during the Republican primary, and continued in that role through the President’s historic defeat of Hillary Clinton.

Sarah has previously worked in leadership roles for U.S. Senators, Governors, and presidential campaigns. In Arkansas, Sarah was a senior advisor to Senator Tom Cotton in 2014 when he defeated incumbent Democratic Senator Mark Pryor, and was campaign manager for Senator John Boozman in 2010 when he defeated incumbent Democratic Senator Blanche Lincoln. In 2007 and 2008, Sarah helped lead her father, former Arkansas Governor Mike Huckabee, to victory in the Iowa Caucuses and seven other states as his national political director. Sarah served in the Department of Education during President George W. Bush‘s administration, and was campaign manager of the ONE campaign, a global non-profit founded by U2’s Bono to take action to end extreme poverty and preventable disease, particularly in Africa.

Sarah has been recognized in Fortune and TIME Magazine “40 under 40.” She is the author of the New York Times bestseller “Speaking for Myself,” a former Fox News contributor, and serves on the Fulbright board.

Sarah grew up in Pine Bluff and Texarkana, and is a proud graduate of Little Rock Central High and Ouachita Baptist University. She lives in Little Rock with her husband, Bryan, their children Scarlett, Huck, and George, and their golden retriever, Traveler.