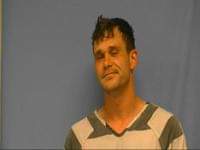 The Saline County Sheriff’s Office (SCSO) arrested a Benton man after he allegedly fell into a commercial building in East End while breaking in.

Deputies responded to an alarm call at Bennett Refrigeration located on Arch Street. Upon arrival, the Deputies found the business had been burglarized.

The SCSO reports that the suspect made entry through the roof, fell into the building and escaped through the front door by breaking the glass.

Deputies used evidence left at the scene leading to the arrest of John Riechard, 33, of Benton. A statement from the SCSO said Riechard has a long criminal history of similar incidents.