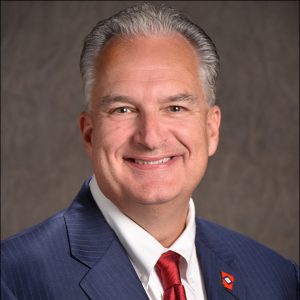 “I am very proud of the accomplishments my team and I have achieved since being elected as State Treasurer,” said Milligan. “It has been an honor and a privilege to serve the citizens of Arkansas in this capacity and I hope to continue my service to this great state as your next Auditor.”

Milligan’s achievements in the Treasurer’s office have received national attention, and he was recently elected by his peers to serve as the National Chair of the State Financial Officers Foundation for 2020-2021.

“I earned our state coffers more than $400 million in interest from its investment portfolio,” said Milligan. “In fact, I’ve reorganized the treasury’s investment division to include an appropriate system of checks and balances, and because of these efforts, I’ve produced some of the highest ever investment returns for the state.”

Since taking office, Milligan has been a leader in the effort to promote financial education throughout the state. Not only was he the first in the nation to bring Idaho’s Smart Women Smart Money conference to Arkansas, he and his team have doubled the assets of the Arkansas 529 Education Savings Program from $500 million to over $1 billion, and successfully implemented the state’s ABLE program, a savings plan for people with disabilities. This program saw its assets reach over $1 million within its first year of institution.

“These are just some of the major achievements we’ve been able to accomplish since taking office and I’m proud to say we’ve done so much more,” Milligan said. “Now, I am humbly asking the citizens of our great state for their vote to allow me to continue to serve them as their State Auditor.”

The Auditor of State is one half of the state’s constitutional check & balance system along with the Treasurer of State overseeing the state’s finances. The Auditor of State is the general accountant for Arkansas and serves as the payroll officer for the executive, legislative and judicial branches. In addition to these duties, the Auditor administers Arkansas’s Unclaimed Property (UCP) program, formerly called The Great Arkansas Treasure Hunt. Through the program, the Auditor’s office connects state residents with their unclaimed property and allows current and past residents to collect their property at any time.

“Auditor Lea has done a tremendous job during her time in office,” said Milligan. “I look forward to continuing her vision of modernizing the office with the latest technology and finding efficiencies where possible to build upon the important work she has achieved.”

Dennis Milligan was first elected as Treasurer of State in 2014. Prior to that, he served two terms as Saline County Circuit Clerk from 2011-2015 and served as the Chairman of the Republican Party of Arkansas from 2007-2008. In his private life, Milligan is a successful small business owner who started his company, Water Treatment Services (WTS), from scratch in 1985. He is also a real estate developer and home builder in Saline County. He has been married to Tina (Summers) Milligan for 42 years. Together they have one daughter, Tiffany (Milligan) Brown and three grandchildren.