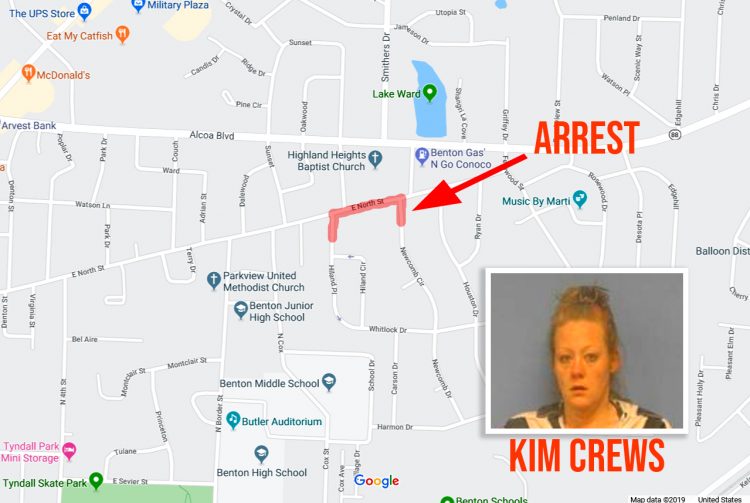 Benton Police arrested a woman on Thursday after pulling over a stolen vehicle with stolen plates.

On December 19th at about 12:55 p.m., officers observed a blue 2019 Ford Edge leaving Hiland Place. The license plate on the vehicle was reported as stolen from Little Rock. Benton Detectives also received a tip that it was a stolen vehicle from Hot Springs.

The officers performed a felony traffic stop on the vehicle as it turned into a driveway on Newcomb Drive. The driver, Kimberly Crews, age 32, of Mabelvale, and a male passenger, were called out at gunpoint and they both complied. The Ford was confirmed as a stolen vehicle reported stolen with Hot Springs Police Department. The license plate was confirmed as stolen out of Little Rock Police Department.

The boyfriend stated that Crews was his girlfriend and that she borrowed the car from a friend. He claimed to have no knowledge of it being stolen. The male was then released. The vehicle was full of clothing and other property belonging to Crews as she was living out of the vehicle. That property was given to a relative.

Crews was transported to the Saline County Jail and was charged with the following:

The license plate was stored as evidence. The vehicle has been returned to the rightful owner.