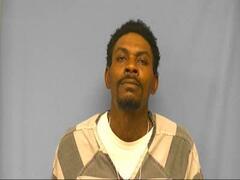 On Wednesday April 6th, a Saline County jury found a parolee guilty of Second Degree Murder. John Anthony Roberts, age 43, of Little Rock, was also found guilty of two counts of Failure to Appear. He was sentenced to 120 years in the Arkansas Department of Correction and a fine of $15,000. Judge Ken Casady presided.

On October 14, 2020, Chief of Police Robert Burnett of the Alexander Police Department was travelling on Hwy 111 when he saw a vehicle parked on a side street. Two people were standing and one person was on the ground near the rear of the car. When Chief Burnett got closer, he noticed that the person on the ground was being kicked and stomped by the Defendant John Anthony Roberts. By the time he arrived at the location, he saw that the victim had rolled across the street into a field and was still being kicked and stomped by Roberts.

Chief Burnett testified that the person on the ground, who was later identified as Michael Oliver, was screaming for help and stating that he could not see. The victim was subsequently taken to the hospital with severe head injuries. Oliver underwent brain surgery, but developed complications in the hospital which led to his death on November 7. An associate medical examiner, Dr. Frank Peretti, testified that the complications were a direct result of the beating and therefore a cause of the victim’s death.

The State also presented evidence that after the defendant was released on bail with notice of future court dates, he failed to make two court appearances.

During the sentencing proceeding, the defendant became unruly and stated to the victim’s son, also named Michael Oliver, that the hospital had killed his father instead of him. Roberts was removed from the court at that time and refused to return.

In requesting the maximum sentence, the State relied on Roberts’ extensive criminal history, including two separate robbery convictions, and a conviction for shooting a woman in the neck. During many of these convictions, and at the time of the arrest the Defendant was on parole.

Prosecuting Attorney Chris Walton stated “this was a senseless and brutal beating by a man that was on parole. The jury recognized the aggressive and dangerous behavior of this man as well as his inability to follow the rules of parole and concluded they did not want him released into civilized society. They got it right.”

Walton also thanked Rebecca Bush and Carrie Robertson for successfully prosecuting the case. In addition, he appreciated the quick action of Chief Burnett at the scene.