Here are some Key Notes, Statistics, and Video for Arkansas Governor Asa Hutchinson’s news update on the COVID-19 pandemic.

Governor Hutchinson started the press conference by praising EMTs in the state for their invaluable work, and then he displayed two graphs (below) that seem to show a downturn in the number of COVID-19 cases and hospitalizations.

He moved on to talk about Economic Development identifying financial needs for rural hospitals along with Arkansas Hospital Association. Revenue has declined for those facilities and so the state has allocated $10 million to be distributed among 27 hospitals throughout Arkansas. Each of these hospitals will receive between $250,000 and $500,000. UAMS will also receive $500,000 to expand tele-health. 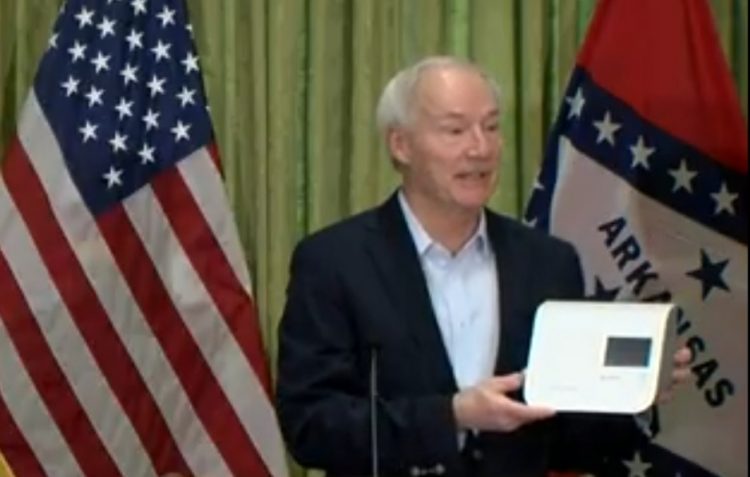 The governor brought an Abbott testing machine to show to the public, stating that Arkansas now has 88 of these around the state. It is capable of giving test results in 15 minutes, but the state is lacking the kits that go with the machine. There is a backlog and Arkansas has kits on order so that the state can expand testing.

Dr. Cam Patterson talked about how mobile testing is helping rural hospitals. “It’s a big shot in the arm for them.” He stated that part of the challenge is getting testing done in areas where they don’t have the resources.

The mobile testing unit has been going to about three communities per week. This week they serviced Texarkana and Forest City. 431 individuals in total were screened in these two communities. Of those, 180 have been tested for COVID-19. Only one person out of those numbers have tested positive for the disease. Patterson said that the mobile testing unit will go to Marianna, Camden, and McGehee next.

As part of looking forward to the goal of attaining Phase 1 of reopening the state, the Governor has signed an executive order creating the Economic Recovery Task Force.

Steuart Walton will chair the task force. The Governor stated that Walton has experience in the hospitality and retails industries and is known as a philanthropist as well. There will be about 26 other members representing different sectors of the economy. And lastly, there will be three cabinet secretaries on the task force, including:

The Governor stressed that the public’s confidence is necessary for reopening the state. “You can open up a restaurant on May 4th, but if the public doesn’t have confidence that they’re going to be safe, they’re not going to go. They’re going to self-select their way out of it.” the governor stated this task force will be working hard in the next couple of weeks and making recommendations to both the governor and their own varied industries. He expects the first meeting of the task force to be next week.