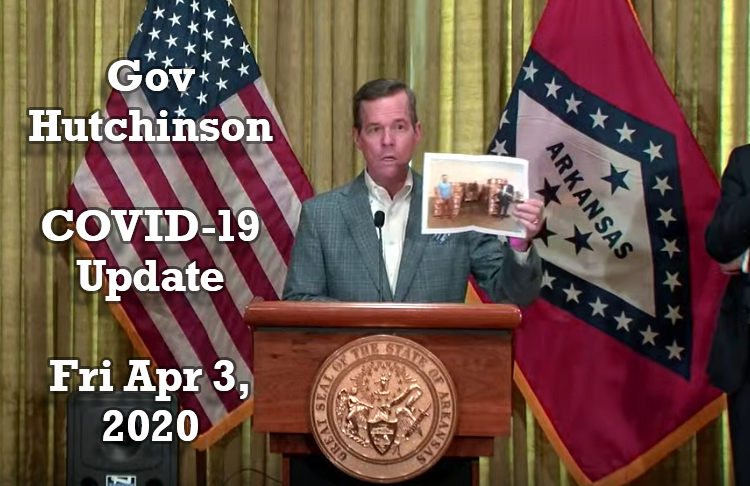 Dr. Patterson holds a photo of the PPEs in the warehouse, along with members of the procurement team.

SEE VIDEO BELOW AND KEY NOTES BELOW.

Hutchinson stated that Arkansas has received their first shipment of personal protection equipment (PPE). He said testing is increasing and there have been 9,626 tests processed to date, with 7.3% positive results. He said this means the state’s testing efforts “more than sufficient compared to other states.”

A reporter asked the governor whether it was within the authority of Benton Mayor Tom Farmer and Saline County Judge Jeff Arey to execute a “Stay at Home” order for minors. Hutchinson stated that they don’t have the authority to block commerce and their orders from Thursday don’t do that. Click to see those orders for Benton and Saline County.

When asked by a reporter about using coaches to get the message out, the governor said he applauds sports coaches on social media who have been encouraging youth to observe social distancing.

UAMS has begun taking a mobile testing unit to areas of the state who don’t have access to testing. Dr. Cam Patterson, Chancellor at UAMS said that the unit went to Helena on Thursday to screen and test local residents there. The result was over 300 patients screened, with 30 being tested for COVID-19.

It’s our mission to serve every single Arkansan. If you’re in or around the Helena area & feeling like you need to be screened or tested, our triage unit is at the old John Deere dealership until 2 p.m. pic.twitter.com/1POxX3fuRe

Patterson said in the PPE shipment, there are gloves and masks from overseas and hand sanitizer from the United States. L’Oreal Cosmetics has committed to making 550 gallons of hand sanitizer per week to give to the healthcare workers in Arkansas, free of charge. Patterson said that Arkansas Heart Hospital has been instrumental in helping to distribute PPEs to clinics.

There is another shipment due to arrive April 11 that will be PPE good for another 30 days. He lauded the state procurement team but then said shipping is another matter. He said that because of bad actors, it’s difficult to get shipments out of China.

In response to a reporter question about whether Arkansas could use C-130s, the Governor said the President would have to give that kind of permission.

Patterson added that, “Frankly, the Chinese Government does not want U.S. military planes landing in China.” He went on to say,”If there’s one thing we need, it’s more cargo capacity. You heard about the New England Patriots sending a plane of theirs to pick up personal protective equipment and bring it back to the United States. I’ll just go ahead and make an appeal – if anybody has resources that they could divert to help us with transporting personal protective equipment from overseas into the United States, that’s the number one thing that we can use right now. If I could move [an April 11th] cargo date up to April 6th or 7th, we’d do that in a heartbeat.”