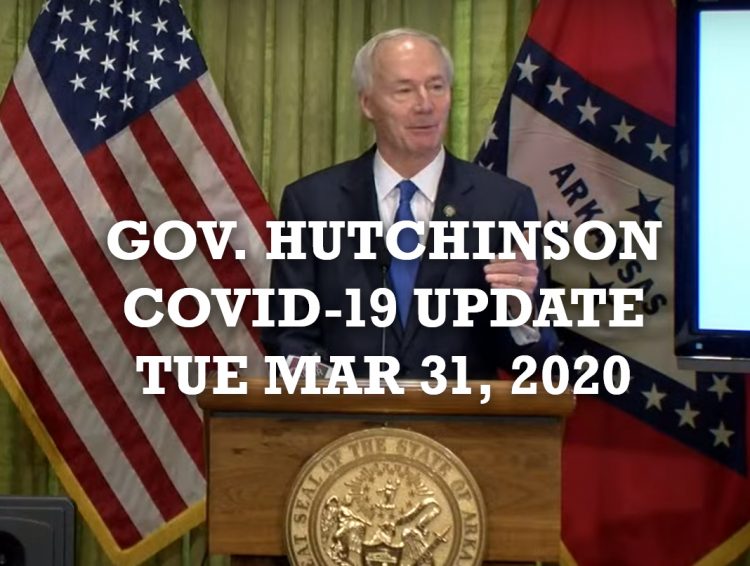 Hutchinson stated that as a state, the number of cases is under their projections. For example, where their modeling projected that Arkansas might have 1,000 cases by now, there are actually about half that many cases. He stated that this indicates that we are having success with social distancing.

The governor also stated that activity in parks by out-of-state travelers has become an issue due to a lack of observing social distancing. Because of this issue, he is considering closing certain parks, such as Buffalo National Park.

Hutchinson has declared Arkansas a major disaster area due to COVID-19. There have been over 30,000 unemployment claims and 275 businesses have turned in applications to the state for business loans through AEDC.

Finally, the governor said he has made and executive order to suspend notary action in person. When necessary, certain professionals can still do the process by audio or visual means. Examples of these cases would be to execute a will or to close on a real estate transaction.

Dr. Nate Smith, State Secretary of Arkansas Department of Health listed the current statistics for COVID-19 patients below, but also touched on a few points:

Smith stated that the state is currently working on lab testing, that workers are doing manual extractions but the process is getting faster and increasing in daily numbers of tests results completed. He said that going forward, testing will be done 24/7. They are also planning to build surge capacity, with the National Guard helping to find more space and hospital beds.

The Doctor also detailed guidelines for when it’s okay to go back to work or being around people. He said if you have had COVID-19 but have not been hospitalized, if you’re feeling well enough, you can count 7 days past the onset day of the illness and at least 3 days since you have had fever.

There are longer guidelines he gave for those who have been exposed to the disease, have not been tested and not having symptoms. He said in that case, you could still be in the incubation period and should stay isolated.

“You’re not doing your colleagues a favor by coming back earlier. You may be creating a larger shortage of manpower,” stated Dr. Smith.