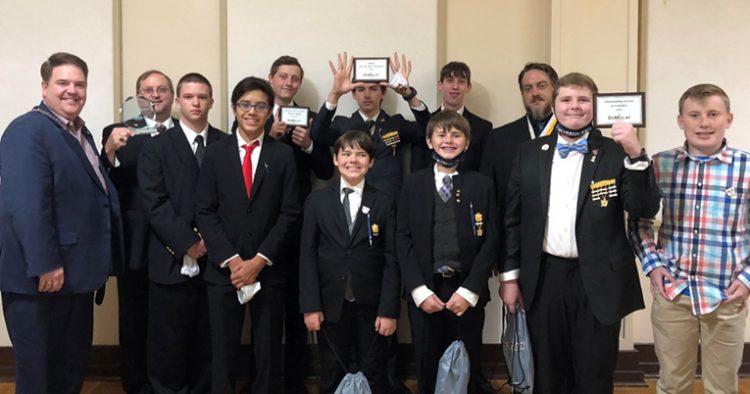 The Benton chapter of a fraternal youth organization brought home the Most Outstanding Chapter of the Year award from recent competition, as well as a few individual awards.

The Excalibur Benton Chapter of the Order of DeMolay International, for boys aged 12-21, earned the honor for the State of Arkansas for the 2019-2020 competition year on Saturday, August 8th, at Arkansas DeMolay’s Annual Conclave held in Little Rock, Arkansas.

Member Dawson Maples was awarded DeMolay with the Most New Members for his recruitment efforts.

Dad Randy Reed, Excalibur Chapter Chairman, was awarded Chairman of the Year and elected State Dad for the 2020-2021 year.

The Excalibur Chapter is sponsored by Benton Masonic Lodge #34 located at 111 N. Market Street in Benton, and is open to any young man of good moral character aged 12-21 that has the recommendation of two current members and a Mason.

DeMolay was founded in 1919 in Kansas City, Missouri. The organization is a character and leadership development organization based on seven cardinal virtues (filial love, reverence for sacred things, courtesy, comradeship, fidelity, cleanness, and patriotism), which are represented in Chapter meetings. The Chapter is run by the young men, who follow Robert’s Rules of Order in their business meetings and are supervised by an Advisory Council.

For questions about DeMolay International in general or Excalibur DeMolay in particular, please contact Chapter Chairman Randy Reed via email at [email protected] or via telephone at 501-317-8072.