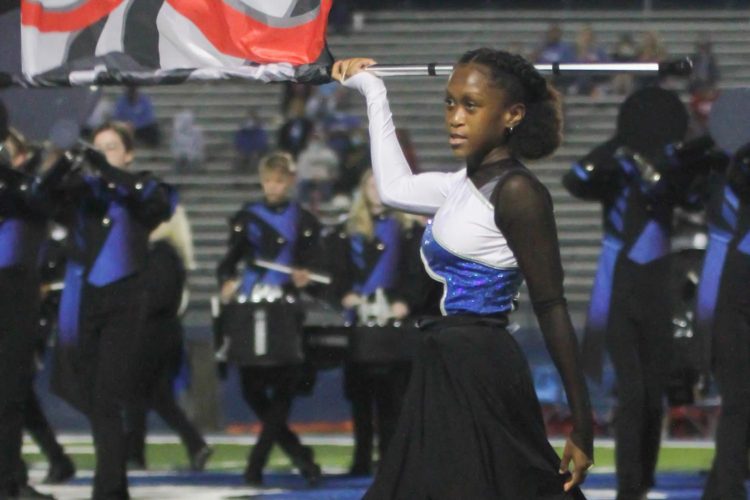 Looking toward the crowd, sophomore Summer Quarles spins her flag during the halftime performance on Sept. 25. The show’s theme this year was The Technicolor Klavier. —Photo by Sophia Ocampo

This story was originally published on Prospective Online, the Bryant High School student news website by Julia Trantham on November 13, 2020.

The motto of the Legacy of Bryant marching band is “Surpassing Excellence and Conquering Limits.” Despite COVID-19 restrictions, members of the competitive marching ensemble persevered this season, ending with a 2nd place finish at state competition. This season’s show was titled “The Technicolor Klavier,” and featured music from Beethoven, Coldplay and Beyonce.

Despite the changes with COVID-19, new students still  joined The Legacy, such as sophomore Ethan Linder.

“I’m looking forward to all of the competitions in the future and seeing how we place,” Linder said. “I really only joined because my friend [sophomore] Hunter Heatley was doing it and it seemed fun, but now that I’m in it, I really enjoy it.”

There were a lot of changes in the way the ensemble had to rehearse. Due to restrictions from COVID-19, the state set guidelines to make sure that band members remained safe throughout the season. Students had to put a cover over the bell of their horns and cut a hole in masks used only for when they were playing.

One of the hardest things that junior drum major Riley Chronister had to deal with throughout the season was keeping people distanced.

“I know that it’s hard, but [staying six feet apart] is for the safety of others, and safety is our number one priority,” Chronister said.

Another difficulty Chronister had to face was trying to meet expectations of the other drum majors.

Senior trumpet section leader Stephen Snow felt that even though this season was different, the band would still push through the challenges.

“COVID-19 created a wall that we just needed to break through to become a better group like we have been in the past,” Snow said. “Wearing masks and socially distancing in our drill and when we were hanging out was tough. I enjoyed it, though it could be stressful at times, but I guess the stress is what makes it fun, you know?”

In addition to new members, a new band director filled a position in the Bryant Band program. Jordan Van Dyke is the newest band director, and he is in charge of the concert band. Although he isn’t able to see his students’ faces, he isn’t letting that get him down.

“It’s been exciting to meet all of the kids,” Van Dyke said. “I think that competitive band is going well.  Obviously, it’s a whole different year with COVID-19, and I really believe that the students who are here really want to be here. I don’t think there’s a lack of commitment, and everyone here is one hundred percent.”

Van Dyke also had a positive outlook for the season, even though it was difficult.

“I looked forward to the students having good performances, because it’s about them,” Van Dyke said. “They made sacrifices to come to competitive band, stay late and put in the extra hours and the hard work. I think our show this year is very demanding in terms of tempos and physical demand.”

The Legacy’s first competition was held at Cabot, and the ensemble placed second, earning several other awards. Their second competition was at Lake Hamilton. The Legacy had a caption sweep in their class, and was awarded Overall Music, General Effect, Percussion and Colorguard awards, as well as Grand Champion. The Legacy also competed at a Paragould contest, placing second and earning several awards. More information about the season and the Legacy can be found here on their website.

“It’s about the students,” Van Dyke said. “I want the kids that are working hard this year to have a great performance, and trophies will come and go, but knowing that we had a great year in terms of diversity and adversity, and the outcome of that, I’m just excited to see it all come together.”