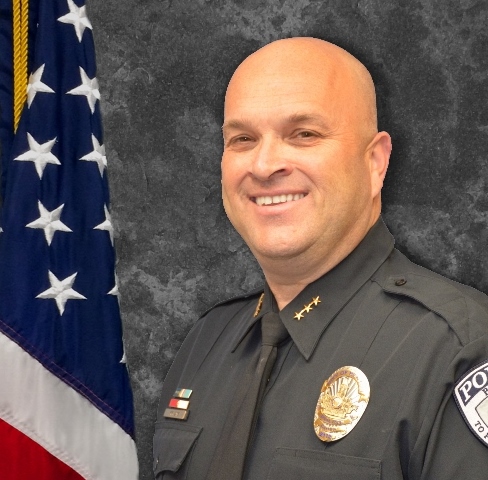 Governor Hutchinson stated, “Chief Lane’s extensive experience in law enforcement and his background with the FBI has well-equipped him to serve as the new Arkansas Drug Director. Chief Lane is a dedicated leader who has been a valuable asset to several Arkansas drug and alcohol boards and programs. I am confident that he will continue to do an outstanding job working to further alcohol- and drug-abuse prevention and treatment initiatives of our state.”

Chief Kirk Lane stated, “This is a great opportunity to lead people in the same direction to prevent drug abuse and improve the quality of life for all Arkansas. My job is to encourage people to work together to resolve these issues, and I look forward to being a part of the Governor’s team in this effort.”

Chief Lane has served as chief of police for the Benton Police Department since 2009. Prior to serving in that role, Chief Lane spent more than 20 years with the Pulaski County Sheriff’s Office and served as captain of its Criminal Investigations Division for nearly a decade. He is a graduate of the Arkansas Law Enforcement Training Academy and the FBI National Academy.

Chief Lane has also received countless awards for his service including the Mayoral Distinguished Medal of Merit for Benton, 2010 Benton Citizen of the Year and the 2012 Marie Interfaith Award.

Benton Mayor David Mattingly issued the following statement: “On July 11, 2017, Chief Kirk Lane tenured his resignation from the City of Benton and informed me his last day with the city will be August 6, 2017.  He has accepted a position as Arkansas Drug Director for the State of Arkansas and will begin his new career on Monday, August 7, 2017.  One of his most outstanding contributions was the introduction of the Community Policing Program, which broke down many barriers and made our police force accessible to all of our citizens. I wish Chief Lane well in his new position and know that the State of Arkansas is getting a top-notch professional to administer its drug interdiction programs.” 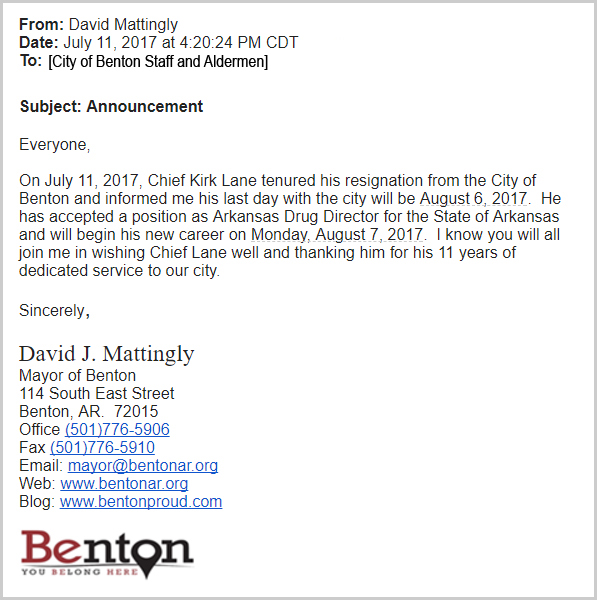 MySaline has learned that Kirk Lane, who has served as Chief of the Benton Police Department since January 2009, has resigned and will take a position as Arkansas State Drug Director. The following letter from Benton Mayor David Mattingly was sent to City of Benton staff and City Council members late Tuesday afternoon on July 11, 2017.

The position was previously held by Denny Altes since June 2015. Altes resigned in at the end of June 2017. The State Drug Director salary is $73,865. The position currently falls under the Department of Human Services, in the Office of Alcohol and Drug Abuse Prevention. Chief Lane’s salary as Benton Chief of Police is currently $93,408.

Updates will be posted here as information becomes available.