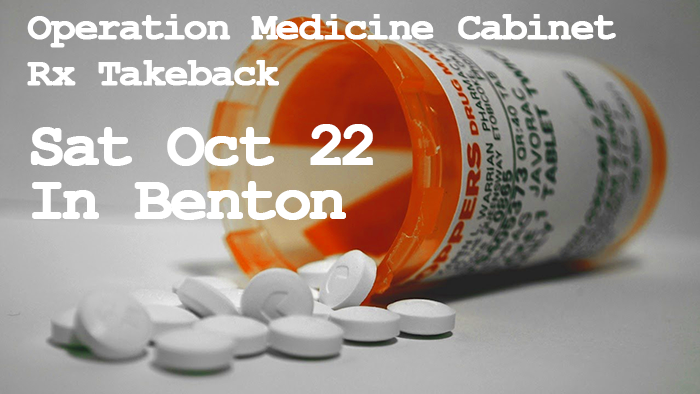 Drug overdose deaths is now the leading cause of accidental deaths in the U.S., surpassing vehicle fatality accidents by nearly 18,000 deaths. In an effort to greatly reduce the epidemic, the Benton Police Department will hold the 13th Operation Medicine Cabinet on Saturday, Oct. 22.

The drug-take-back event will be held from 10 a.m. to 2 p.m. at Ferguson’s Furniture, at the corner of Military Road and Ferguson Drive. People are encouraged to gather old or unused medications and drop them off at this event.  Medications can also be dropped into the 24/7 drop box located at the front of the Benton Police Department, located at 114 S. East St.

According to the Centers for Disease Control and Prevention (CDC), “the United States is in the midst of an opioid overdose epidemic.” More persons died from drug overdoses in the United States in 2014 than during any previous year on record.

“It is quite alarming that prescription drug abuse and overdose deaths continue to spike, but we are diligently working on finding ways to reduce this catastrophe,” Police Chief Kirk Lane said. “We can all play a major part in reducing these numbers by providing awareness of prescription drug abuse or misuse to the public, and by participating in Operation Medicine Cabinet. By collecting old and unused medications, and teaching the importance of locking up your medications you currently take, we can reduce those risks.”

Prescription opioids – oxycodone, hydrocodone, codeine, morphine, fentanyl, and other pain relievers – also is a large contributor to other drugs. The CDC states that, “94% of respondents in a 2014 survey of people in treatment for opioid addiction said they chose to use heroin because prescription opioids were ‘far more expensive and harder to obtain’ and that “four in five new heroin users started out misusing prescription painkillers.” In 2012, 259 million prescriptions were written for opioids, which is more than enough to give every American adult their own bottle of pills, according to the CDC. Drug overdose deaths involving heroin continued to climb sharply, with heroin overdoses more than tripling in 4 years.

Another reason to drop off medications at the Operation Medicine Cabinet is for environmental safety. Medicines flushed down the drain will end up in water supply, which is harmful to all forms of life. Prescriptions thrown into the trash will end up in landfills which is also greatly harmful to the environment. Medications collected at the Operation Medicine Cabinet will be disposed of properly in a manner that is not harmful to the environment.

For more information about Operation Medicine Cabinet and for a list of locations across the state where medicines can be dropped off, visit www.artakeback.org or call (501) 618-8693. 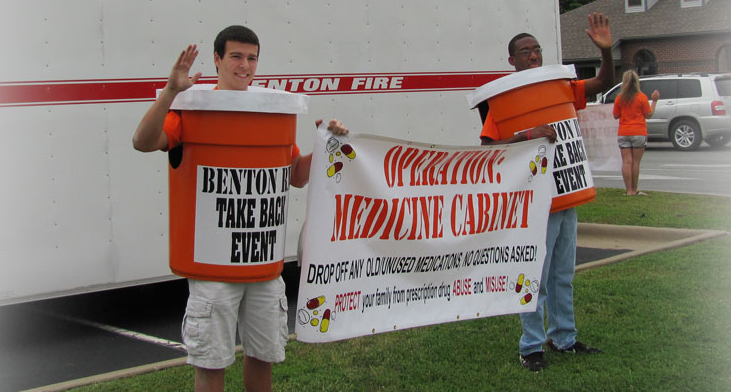