The National Weather Service in Little Rock has issued a Winter a Weather Advisory until Sunday January 16th at 6 a.m. 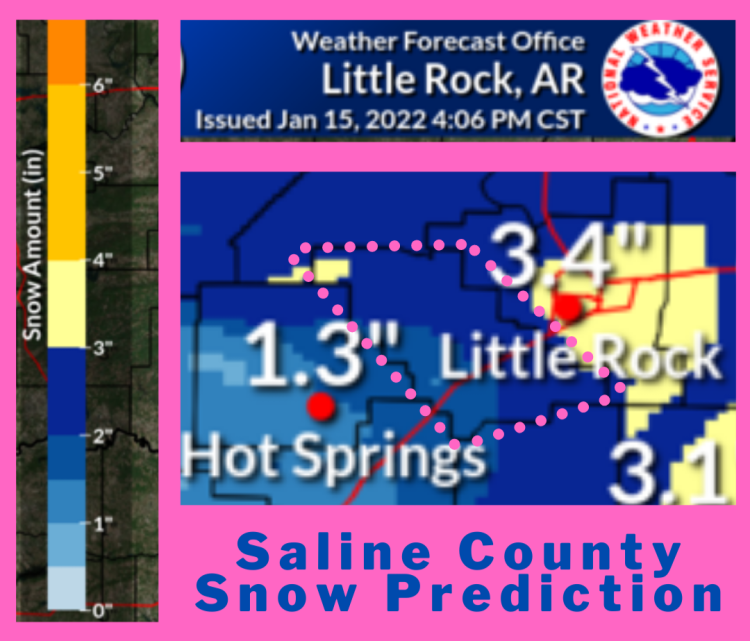 Overall, the thinking has not changed appreciably but the approaching storm is a little stronger and the cold air itself a little colder and deeper than previously predicted. See below for when, where, how much snow, and how sure they are, with central Arkansas info with in pink words. When will it happen… A storm system will affect the area late Friday night through Sunday morning. Snow will become likely, as well as gusty north/northwest winds. Where will the snow be… As of right now, the concern for the heaviest snow is across the higher terrain of the Ozarks into northeast Arkansas and high peaks of the Ouachitas. The remainder of Arkansas can expect some snow with generally light amounts. How much snow… The greatest amounts, from 4 to more than 6 inches, are expected from southwest of Harrison to north of Searcy to around Newport, and on a few high peaks in the Ouachitas. One to two inch accumulations could occur in much of northern and central Arkansas, with generally less than an inch in southern sections. Gusty north/northwest winds Saturday afternoon/night could down tree limbs and power lines where snow is heavy. There is still forecast uncertainty… The main issue is a lack of Arctic air in place as moisture increases. While it will eventually become cold enough to snow, there is difficulty timing the arrival of the cold air. Also, where will moisture be most abundant, and for how long once the cold air sets in. Expect updates to the forecast, including forecast snow accumulation and areas impacted.