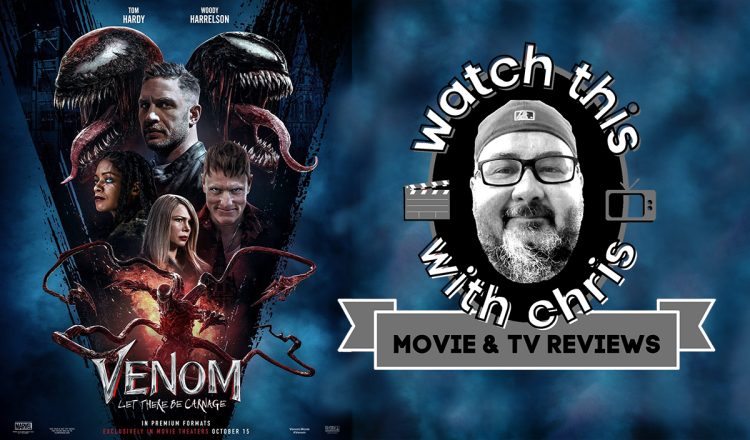 Admittedly, this is one that I’ve been looking forward to. I love the first “Venom” movie and the trailer for this one looked awesome. So, the boy and I got up Saturday morning and went to the movies.

Now I typically like to build some suspense before I just come out and tell you what I thought of the movie, but I can’t hold it in any longer. I loved it! This movie is so much fun.

Here’s the deal: Eddie Brock (Tom Hardy) attempts to reignite his career by doing some interviews with notorious serial killer, Cletus Kasady (Woody Harrelson), who then becomes the host of the symbiote, Carnage, and escapes death row after a failed execution. Along the way, you also meet Kasady’s love interest, Frances Barrison aka Shriek, played by Naomie Harris.

I loved the casting of this movie. Hardy was great again as the title character. His battle with Venom is just as comical as it was in the first movie. My favorite thing about this sequel though is the casting of the always great Woody Harrelson as the villain.

Woody just keeps getting better with age. Doesn’t he?! He was so great in this movie. His character, Cletus Kasady, is an absolute savage, and Woody gives everything to the character. Just look at his face on the poster. He’s such a great actor.

I also really enjoyed the writers’ expanding on the story of Dr. Dan (Brock’s love interest’s fiancé.) He had a much bigger part in this movie and was really funny.

As always, I read a lot of reviews on this movie after I watched it, and I was really disappointed that so many “critics” gave it such harsh reviews. I read things like, “A big pile of nothing” and “forgettable” and “how could they go so wrong?” I disagree with all of this.

I like funny and I like explosions and gratuitous violence and good storylines and movies that don’t make me have to think too much. This one checked those boxes for me, and I’m telling you to go check it out for yourself. Don’t JUST take my word for it. I loved it and my 13-year-old son loved it.

“Venom: Let There Be Carnage” is rated PG-13 for intense sequences of violence and action, some language, disturbing material, and suggestive references. My girls are 9 and 10, and I think it might have been a little much for them, but the boy had a ball!