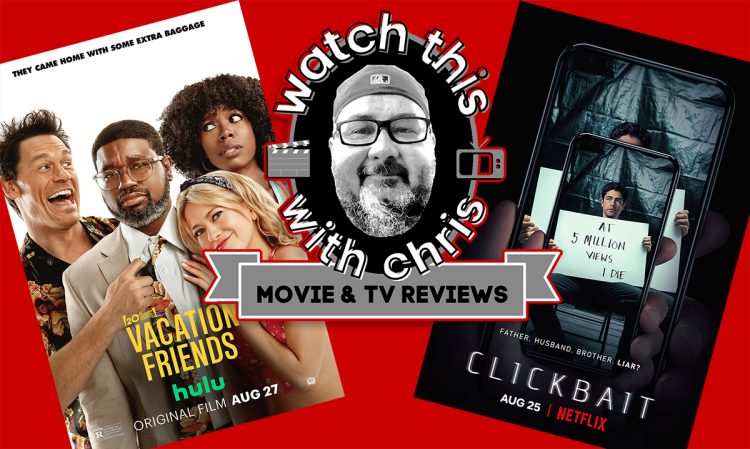 So, this is admittedly the kind of movie I usually like. I love silly/stupid irreverent comedies. My wife, however, doesn’t typically watch this stuff. This time though… she did. Now maybe she just wanted to spend some time with her loving husband because she definitely wouldn’t have picked this herself, but she watched it with me… and she laughed a few times.

The movie is about a couple on vacation in Mexico who meets up with another couple, very unlike themselves, and then chaos ensues. You know the story. We’ve seen it before. One couple is strait-laced, and one couple is out of their mind, wild and thrill-seeking. In this movie, the strait-laced couple is played by comedian Lil Rel Howery (Free Guy, Fatherhood) and Yvonne Orji (Night School, Insecure) and the out-of-control couple is played by John Cena (Playing With Fire, The Suicide Squad).

Now admittedly I’m a fan of Lil Rel Howery. I think he is absolutely hilarious. His stand-up is really funny. I loved him in “Free Guy,” “Tag,” “Bad Trip,” and “Good Boys.” He’s just funny. He typically seems to play the side kick, and he’s always funny. Now for John Cena. Obviously, he started off in the WWE and then worked his way into Hollywood doing action movies. However, I’ve been more and more impressed with his comedic acting. He’s actually really funny. I enjoyed him in the new “The Suicide Squad” movie playing the role of Peacemaker. He was funny in “Daddy’s Home 2” and my household absolutely loves “Playing With Fire.”

“Vacation Friends” is definitely rated R and it got that rating for drug content, crude sexual references, and plenty of language throughout.

This one took me a couple weeks to finish because I’ve been trying to watch so many different things on about 5 different streaming platforms. However, how long it took me to finish it doesn’t say anything for its “watchability.” I finally finished it last night and I couldn’t believe how it turned out.

When family man Nick Brewer (Adrian Grenier) is abducted and placed before the whole world, those closest to him race against time to find out who did it and why. There are most definitely some twists and turns along the way. That’s my favorite thing about this series. Whenever we watch something like this, we all typically think we’ve got it figured out at some point. Right? We like to play detective. I mean, really if we weren’t trying to figure out who did it, it must not be worth watching. This one did NOT turn out anything like I thought.

I’ve read a lot of other reviews on this one, and some of these “reviewers” are just annoying to me. I’ll quit reading a review when they say things like “not life-like” or “too over the top.” That’s what I typically want when I’m watching TV. I don’t want it to be just like real life. I want to be entertained. I love over the top.

Okay. I’ll get off my soapbox. This is an 8-episode Netflix series. I didn’t go in expecting something that would end up winning an Emmy necessarily. The trailer caught my attention and so I watched it. Now I’m glad I did.

The characters, for the most part, were believable and relatable. My favorite character was the sister of the abducted main star. Zoe Kazan (Ruby Sparks, The Big Sick) plays Pia Brewer, and she did a fantastic job in this role. I actually like that there are no mega stars in the series. They were all relatively unknown to me.

I recommend you give this one a shot. I’d give it probably 7/10 stars. The acting isn’t the absolute best, but the story is compelling. “Click Bait” is rated TV-MA, but only for thematic elements. There is no actual nudity. There are adult “suggestions” and some adult language.