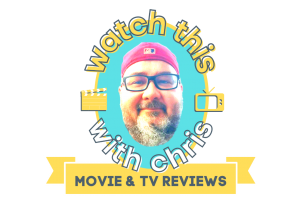 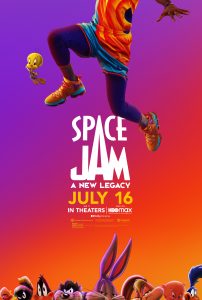 “Space Jam: A New Legacy” (in theaters and streaming on HBO Max)

I’ll be perfectly honest with you all. I went into this movie with ZERO expectations. Actually, that’s not true. I went into this movie with the expectation that I would hate it. I’m of the belief that some things are just better left alone. Very rarely have I seen a “remake” that was good. In fact, I can only remember three – “True Grit,” “A Star is Born,” and “It.” I genuinely despise most remakes. The new “Robocop,” HATED IT.” The “War of the Worlds” remake with Tom Cruise, HATED IT. “Point Break,“ HATED IT. “The Day the Earth Stood Still” with Keanu, REALLY HATED IT!

Before we proceed, let’s insert a valid question: Is this movie a remake or a sequel? I’ve seen varying opinions. I’m going with remake since I see no continuation of the story. There are a couple of one-liners about the Tunes thinking a basketball game sounds “familiar” and there was a sequence where MJ is MAYBE going to show up, but I just don’t see it as a continuation of a story. That’s why I say remake.

So, you get the picture. I don’t typically care for remakes. I REALLY don’t care for remakes of “classics.” I’ve heard talks of Hollywood remaking/rebooting “Home Alone” and “Back to the Future.” That just makes me angry. And aside from not caring for remakes, I also, admittedly, am just not a big fan of King James.

Anyway, I’ve always loved “Space Jam.” I mean… who doesn’t?! If you grew up in my generation, Michael Jordan was the coolest guy on the planet! He was just almost super-human! Then you put him in a basketball game with the Loony Tunes characters, I mean come on! I can’t tell you how many times I watched this movie back in the day, and I’ve seen it numerous times in recent years with my kids. It’s definitely a “classic.”

So, let’s get to the new one. LeBron James and his young son, Dom, get sucked into the Warner Bros Server verse. To get out and back home safely, LeBron teams up with Bugs Bunny and the rest of the Tunes Squad for a high-stakes basketball game against Al G. Rhythm (Don Cheadle) and the digitized, powered-up Goon Squad.

That’s pretty much the gist of the plot. Story-wise, it’s nothing too complex as you would expect. However, what I didn’t expect is how much I enjoyed the film as a whole. LeBron’s acting isn’t stellar…also as you might expect, but the film has a lot of heart. There’s an over-arching moral of be yourself and not just who others expect you to be. The story up to the basketball game is okay. There are touching moments and there are great one-liners. However, when the game starts, it gets good! The volume of recognizable character cameos is simply unexplainable. It’s really fun to see pretty much every Warner Bros character in history at the basketball game.

This film is appropriately rated PG. It seems as if many or most films geared for children these days depend on pop-references and bathroom humor in an attempt to entertain the younger audiences. Well, there’s definitely a lot of pop culture in this film, but I think it relies more on special effects and video game type technology and references.

Overall, it’s a fun movie and I recommend it. It certainly surprised me, and I’ll likely watch it many more times with my kids when they want. 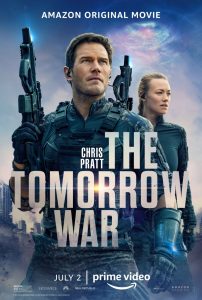 So, this one took me a couple weeks to actually sit down and watch. I’m not normally a sci-fi guy. As soon as I read a synopsis of the film and saw what it was about, I kinda decided I wasn’t going to watch it. After all, the whole traveling through time to stop a war from happening that leads to the extermination of the human race has been done a few times. Ever heard of a little franchise called “The Terminator???” Anyway, I do like Chris Pratt, and I read some good reviews, so I finally sat down and gave it a chance.

The world is stunned when a group of time travelers from the year 2051 show up and interrupt a major televised sporting event to deliver the urgent message that 30 years in the future, mankind is losing a global war against a deadly alien species. (Think “The Terminator” meets “Independence Day.”) The humans are losing so badly, a draft is put into place and humans are transported into the future for 7-day periods to fight the aliens.

Chris Pratt (Jurassic World and Guardians of the Galaxy) stars as veteran Dan Forester, a family man who thinks his fighting days are ling behind him. Forester finds himself drafted and leading a squad of misfits into battle against the aliens. In the future, his commanding officer is played by Yvonne Strahovski (24: Die Another Day and The Handmaid’s Tale.) She acts quite coldly towards him. The reasons become easy to figure out as the story progresses.

Overall, it’s not a GREAT movie. It’s very, very predictable. Now certainly predictability can be okay in movies. Deep down we want to know that the good guys are going to win. However, some are just a little too predictable. This is one of those.

“The Tomorrow War” is rated PG-13 for numerous scenes of extensive and prolonged sequences of sci-fi action violence. People get bitten in half, with crunching sounds, but it’s not really gory. I would have no problem if my 13-year-old son watched the movie.

So, should you watch it? Well, that depends on you. Do you like this type of movie? Then sure. Do you like mindless, predictable action movies? Then absolutely! I didn’t love it, but I also didn’t hate it. As I’ve said in previous reviews, I’m an action movie guy. I like silly. I like mindless. I don’t want to think too much about a movie. There were some good actors in the movie. So yeah… why not?! However, if you don’t like low-brow, cheesy, predictable sci-fi action movies, stay clear of this one.