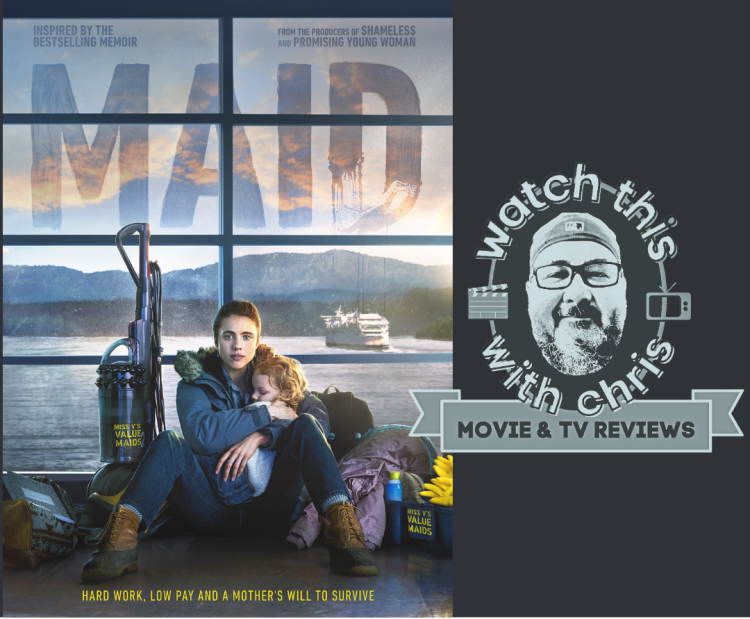 Honesty time!! This may very well be the most important series I’ve ever watched. I didn’t know for sure what it was all about when I started, but I’m so thankful that I watched it, and you should too!

Inspired by the powerful New York Times best-selling memoir Maid: Hard Work, Low Pay, and a Mother’s Will to Survive by Stephanie Land, “Maid” stars Margaret Qualley (The Leftovers, The Nice Guys) as Alex, a young mother in an abusive relationship that finally says enough is enough and takes a chance on herself. She flees in the middle of the night, seeks government assistance, and lands a job, only to find that her problems are just beginning.

The entire cast is wonderful, from the lead role to all of the supporting characters.  The greatest casting choice of this series, in my opinion, is undoubtedly Andie McDowell (Groundhog Day, St Elmo’s Fire) cast as Alex’s mother, Paula. In my opinion, McDowell absolutely deserves an award for her role in this series. She showcases her talent in a way that is rarely seen. There are so many moving performances in this series. Also…fun fact- McDowell and Qualley are real-life mother and daughter!!

“Maid” should help people understand why so often poor people stay poor and the red tape and government services work against a person. We absolutely need better ways to help people. There is so much to unpack in this series and so much that is so close to home for so many. The cycles of dysfunction show up everywhere.

So I didn’t waste any time here giving you my opinion on this series. I told you to watch this show back in the 1st paragraph, and I absolutely stand by that. I wish every single American would watch this show. We’re, oftentimes, too quick to judge someone for their circumstances. We’re too quick to call someone “lazy” or give our unwanted opinions about another person’s misfortune. We’re so quick to judge someone who can’t seem to stay away from a toxic, or even dangerous relationship. But, most often, all we’re seeing is a single snapshot in time.

I’m literally begging you to watch this show. I’m begging US to just be kind, understanding, empathetic, non-judgmental, loving, and helpful.

In closing, I want to leave you with the words of a wonderful writer out of Alabama. Whitney Ballard wrote the following after watching “Maid,” and I just love what she says.

“10 reasons why you need to watch MAID on Netflix right now.

1. The “gray” characters. Not black or white. Not good or bad. Just in-between. Like all of us. The show captures their “humanness” so perfectly.

2. “Is this abuse?” is a question this show answers so poetically. Sometimes abuse isn’t a black eye. Sometimes it’s manipulation or belittlement or keeping someone “small”. Emotional/financial abuse is a thing, and this show brings it to the forefront.

3. The visual representation of how everything FEELS. Ugh. My heart. When she literally melts into the couch at the brink of depression. Never seen anything like it.

5. The fact that it’s based on a true story…and exemplifies the REAL LIFE story of hundreds of thousands of people living in this never-ending cycle. It’s a show every parent, every employer, and EVERYONE needs to see when deciding how to treat someone before knowing what they’re going through at home.

7. There’s a running tally of her bank account on the screen, and we see her funds go up/down/up/down. This isn’t a linear story, but rather a realistic rollercoaster. (and the show has a ton of quirky methods to SHOW you that)

8. It’s the story of a mom’s unwillingness to let her daughter grow up in the same situation that she did. Breaking a generational curse.

9. Alex is the hero of her own story. Not her partner. Or her parents. Not the government. She can’t trust most people around her; which is a sad reality for so many. Instead, she makes a way for herself and her daughter.

10. It’s just a dang good show. I immediately went out and bought the book, looked up everything about the author, and restarted episode one. I can’t shake it, and I want to tell everyone about it.”

For me, “Maid” is 5/5! It’s an absolute must- watch! “Maid” is rated TV-MA mainly for adult language. There is some mild sexuality, but nothing too graphic and no nudity.