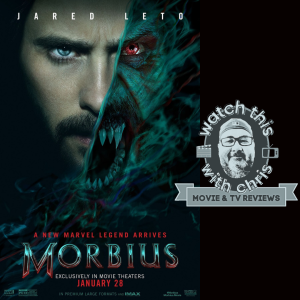 No surprise, friends. I love Marvel. I do. From Captain America all the way through Spider-Man: No Way Home. I love Marvel! There are very few exceptions and those are “Thor 2,” “Black Widow,” “Eternals,” and I didn’t love “Iron Man 3,” but it had its moments. None of them are as bad as “Eternals” though. I wouldn’t waste my time watching even a minute of it. I don’t know if I even reviewed that one though because I didn’t finish it. That’s saying something for me too. I love movies and I hardly ever just get up and don’t finish a movie.

That’s it though. Now that we’re, I think, in Phase 4 of the MCU, we’re getting some really different stuff. I LOVED “Shang-Chi!” I love both “Venom” movies. I’m super excited about some of the upcoming movies including the new “Doctor Strange,” “The Marvels,” the new “Black Panther,” the new “Thor,” the new “Ant-Man,” and even the new “Fantastic Four.” I’ve really been looking forward to “Morbius” too. So, I know you’re asking yourself, “Why does he keep rambling about other movies instead of telling us about this one?” Okay. You’re right. Let’s get to it.

To me, “Morbius” is just okay. It stars, in my opinion, one of the greatest character actors of this generation as the title character. The great Jared Leto (Dallas Buyer’s Club, House of Gucci) plays Dr. Michael Morbius- a brilliant doctor and scientist who lives with a rare blood disease and spends his life trying to find a cure for himself and his best friend, Milo- played by Matt Smith (The Crown, Last Night in Soho.) However, instead of simply curing himself, he inadvertently infects himself with a form of vampirism instead.

The plot is pretty thin. The CGI is overdone. I think it had promise, a solid start, but it just didn’t really hold my attention. Now I don’t want to compare it to other Marvel movies, because to be fair, it is very different. You can’t compare it to a “Spider-Man” or an “Avengers.” Again, I think it COULD have been great, but the filmmakers just missed it here. It was a little confusing, pretty soul-less, and painfully generic in my opinion.

Nothing will deter me from waiting in line for the next Marvel movie though. I absolutely love the franchise and I’m sure I always will. “Morbius” is rated PG-13 for intense sequences of violence, some frightening images, and brief strong language. Honestly, this one would likely have been better had they just gone for the R-rating. I give this one a 2.2/5.