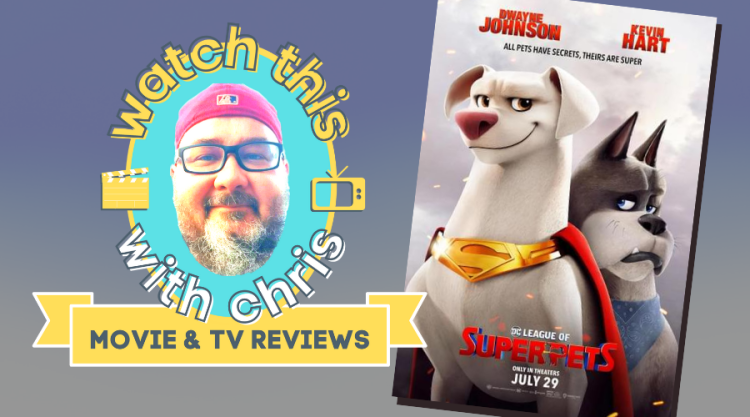 When the Justice League are captured by super-villain, Lex Luthor, Superman’s dog, Krypto, forms a team of shelter-pets who were given super-powers: A hound named Ace, who becomes super strong, a pig named PB, who can grow to giant size, a turtle named Merton, who becomes super-fast, and a squirrel named Chip, who gains electric-powers.

Y’all this is a hit through and through! The jokes are fantastic, and the casting is terrific! Some of the Batman and Superman stuff kind of reminded me of Lego Batman, and I always loved that.

So, let’s get down to the cast. Superman’s Dog, Crypto is voiced by Dwayne “The Rock” Johnson (Jumanji, San Andreas). Ace is voiced by Kevin Hart (Jumanji, Night School.) John Krasinski (The Office, Jack Ryan) is Superman.

And Batman is voiced by none other than Keanu Reeves (John Wick, Bill & Ted’s Excellent Adventure.) Every one of them is spot on with their characters, and the chemistry between Dwayne Johnson and Kevin Hart is as amazing as always. Those two are pure comedy gold when they team up. Green Lantern is also in the film, and another DC character makes his debut in a post-credits scene, but I’m not going to spoil that. Just know that there IS a mid-credits scene AND a post-credits scene.

This movie is an incredibly refreshing change of pace for DC. As I previously stated, DC has had its struggles with fan reception of some of its biggest movies. Big-budget movies like “Batman V Superman,” “Justice League,” and “Man of Steel” were all met with lukewarm (at best) reception at the box office.

“Wonder Woman” was a big hit and, in my opinion, one of the best superhero movies of all-time, but then I hated “Wonder Woman 1984.” 2011’s “Green Lantern” was a big-time bomb at the box office. “Aquaman” was a hit, and I loved it. “Shazam!” was somewhat of a sleeper/surprise hit, and my kids and I absolutely loved it! Speaking of “Shazam!,” you’ll see the trailer for the sequel in “DC League of Super-Pets!” 2016’s “Suicide Squad” was good, as was 2020’s follow-up, “Birds of Prey.” However, I loved 2021’s “The Suicide Squad reboot.

Anyway, there have been good ones and there have been BAD ones. I very much LOVE the turn they took with the caped crusader in this year’s “The Batman,” and the casting choice of Robert Pattinson.

All that to say THIS MOVIE may be one of my very favorite DC movies ever. “DC League of Super-Pets” is an absolute homerun! Take your kids or go without them! You’ll love it either way. If you love immature humor, there is some of that for you. If you just want to see a really fun superhero movie, this is for you. There are also some really, REALLY heart-warming moments in the movie. Both my daughters talked about how they almost cried at one point.

“DC League of Super-Pets” is rated PG for action, mild violence, language, and rude humor. I’m giving this one a solid 4.7/5. It’s a Watch This with Chris MUST-SEE!