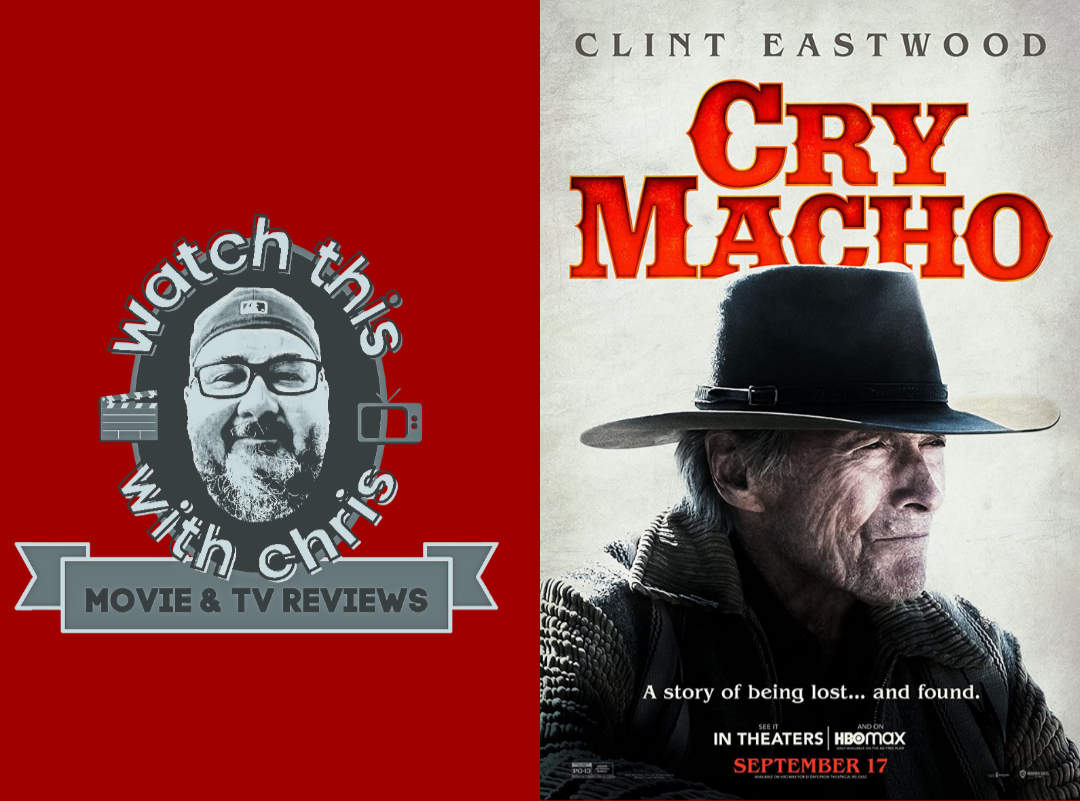 I woke up bright and early on Saturday morning and everyone else was still snoozing. Oh, how it was quiet and peaceful in Casa de Chris. So, what to do? What to do? How about a nice hot cup of coffee and a Clint Eastwood flick!

Now I had no idea what this movie was about. All I knew is it was Clint Eastwood. That was enough to pique my interest a little. Admittedly though, I’ve never been a big western person. I’ve seen some of the classics, and they’re okay, but I pretty much stick to Tombstone, True Grit (both the original and the remake), and Young Guns. Oh…and maybe Unforgiven. That’s about my extent of westerns. I didn’t even know if this was a western. Again…I just knew it was Clint Eastwood, and he was wearing a cowboy hat on the poster.

“Cry Macho” is Clint Eastwood’s 45th Directing credit. His 52nd producing credit, and his 72nd acting credit. There are SO MANY great Clint Eastwood movies, there’s no way to pick a favorite. I loved “In the Line of Fire,” “Dirty Harry,” “Unforgiven,” “Every Which Way But Loose, “Space Cowboys,” and of course, “Gran Torino.” So, how did this one measure up?

“Cry Macho” is about a one-time rodeo star and washed-up horse breeder and trainer who begrudgingly takes a job to bring a man’s young son home and away from a bad situation in Mexico. This movie is that “journey” whereas the star finds redemption through teaching the wayward boy the ways of life and being a good man. The films tagline is “A Story of being lost…and found.”

As far as the cast goes, Clint Eastwood is Clint Eastwood. He’s always pretty dang believable. He plays the lead role of Mike Milo in the movie. In my opinion though, THE great casting decision was made when it came to country singer Dwight Yoakum (Sling Bade, Four Christmases) being cast as Clint’s ex-boss/the boy’s father. I always enjoy seeing Dwight in movies. He was a brilliant “bad guy” in “Sling Blade.” He is versatile in his roles and always believable as well.

So, for the movie as a whole. I don’t know. It’s hard to say you just don’t like a Clint Eastwood movie. You know? That almost sounds blasphemous. It’s not bad. It’s just not in my top 10 or even 20 of his movies. The story has been told too many times, too many different ways, and this one just wasn’t original for me. It wasn’t “fresh.” I thought it was very predictable. The boy, played by Ivan Hernandez (The Graceful Path) seemed to try too hard in his role. It also seemed very anti-climactic in the end.

All in all, I expected much more out of this one. Again…not a terrible movie, but I’d say if you’re a big Clint Eastwood fan, you could probably pass this one by. I give it MAYBE 5/10 stars.

“Cry Macho” is rated PG-13 for some language and thematic elements.