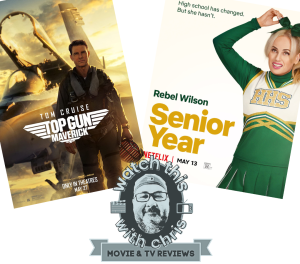 Hey everybody! This is my first review in a while. Life has been REALLY busy as of late. For those of you that don’t know, my nephew (whom Christie and I helped raise) had brain surgery early last week to remove a tumor. I’ll leave it at that, but, needless to say, this has been a stressful time for us all. He’s at home now and getting better and stronger every day, and me and Mama went back to the movies today!

Here’s a sequel 36 years in the making, and…WOW!!! So, after more than thirty years in the Navy as one of their top aviators, Pete “Maverick” Mitchell is called back to Top Gun to train a new generation of fighter pilots to take on the most challenging mission in history. Of course, Tom Cruise (Top Gun, A Few Good Men) returns in the lead role. Jennifer Connelly (A Beautiful Mind, The Rocketeer) joins the cast as the leading lady, Penny Benjamin. There is a really spectacular cast in this movie aside from the two above mentioned leads including Miles Teller (Whiplash, Fantastic Four), who plays Rooster, and the son of Maverick’s best friend, Goose (played by Anthony Richards) in the original film. Jon Hamm (Mad Men, Million Dollar Arm) plays Admiral Beau “Cyclone” Simpson. Glen Powell (Hidden Figures, The Expendables 3) plays hot-shot pilot Jake “Hangman” Seresin. And of course, the great Val Kilmer (Top Gun, The Doors) returns as Admiral Tom “Iceman” Kazansky.

This is one that I actually didn’t read ANY other reviews before watching the movie, and that’s unusual for me. I did, however, talk to many, many friends who were able to see the movie before me, and not a single one of them were disappointed. Y’all, I don’t say this lightly, but this may be the best sequel I’ve ever seen. It’s definitely the best long-awaited sequel. As much as I loved last year’s “Ghostbusters: Afterlife,” this one definitely trumps it. Ol’ Tom may be a little “coo coo” into the whole Scientology thing, but the man can make a good movie. Goodness gracious.

He, of course, did a TON of his own stunts as he always does. There is a super cool WW2 P-51 Mustang seen in the movie, and it is actually Tom Cruise’s own airplane. I didn’t know this, but he is an accomplished pilot in real life.

All in all, this movie is exactly why we go to the movies. It’s fun. It’s fast. You laugh. You might cry. There are plot twists. I guarantee you’ll wear out the edge of your seat. Best of all, there’s a ton of heart. It absolutely works on every level. I honestly can’t think of one thing wrong with the movie. There’s nothing I didn’t like about it.

If you love the movies, don’t wait for this one to stream at home. This is one you need to see on the big screen! “Top Gun: Maverick” is rated PG-13 for sequences of intense action and some strong language. This is an easy 5/5. Perfect movie from beginning to end!

Well, this one is no “Top Gun: Maverick,” but I enjoyed it. This is the first time I’ve seen Rebel Wilson since her weight loss. She’s as funny as ever, and she looks great! “Senior Year” sees a cheerleading stunt gone wrong, and the Cheer Captain ends up in a 20-year coma. Now she’s 37, newly awake and ready to pick up right where she left off in her senior year wanting nothing more than to be crowned prom queen.

Rebel Wilson (Pitch Perfect, Bridesmaids) plays the lead character, Stephanie. She’s clueless but endearing and certainly persistent. To me, most of the rest of the cast was relatively unknown aside from Stephanie’s high school boyfriend, Blaine, who is played by Justin Hartley (This Is Us, Smallville) and Chris Parnell (Saturday Night Live, The Ridiculous 6) who plays Stephanie’s dad. I also recognized Jeremy Ray Taylor (It, Goosebumps 2.)

It’s a funny movie. It’s no blockbuster, and it won’t be up for ANY awards, but it’s funny. I’d put it in a category with some of David Spade and Rob Schneider’s B (or C) movies. Again though, there are a lot of laughs. It’s one to come home and stream after a long day at work. It’s completely mindless entertainment- which is what I typically like.

I did read some other reviews on this one before watching, and I was a little surprised to see it get a lot of good reviews. I think movies like this, a lot of times, area what people are looking for. We love in a pretty sick world, and we seem to be, more and more, get pummeled with bad news. We can all use a good mindless, slightly inappropriate laugh from time to time.

“Senior Year” is rated R for sexual material, language, and brief teen drinking/drug use. This is not one to watch with the kiddos. I’m going to give this one a 3.3/5. If you want to laugh, give it a shot