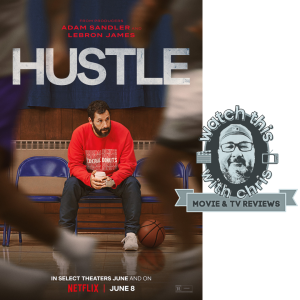 Hustle (streaming on Netflix & in theaters)

Adam Sandler is back, baby!! Not that he ever went anywhere, but man, oh man, he is back in a big way with this one! So, “Hustle” features Sandler (Happy Gilmore, Uncut Gems) playing Stanley Sugerman, a washed-up basketball scout who discovers an amazing street baller in a park in Spain. Stanley immediately sees this guy as his “golden goose” if you will and makes it his mission to groom him for the NBA, both for the benefit of the kid, but also to get himself back in the game.

So, obviously, this movie is full of big names from Hollywood and from the basketball world. It’s also full of substance. True, it may be a tad formulaic at times. It’s a sort of rags to riches story for the player and maybe a redemption story for the coach/scout, but it’s well-made and the story is told well.

I’ve been an Adam Sandler fan from the beginning. I’m talking about going back to the SNL days and those legendary comedy albums. “Billy Madison” will probably always be my favorite of his movies, but then there’s also classics like “Happy Gilmore,” “The Waterboy,” “50 First Dates,” “The Wedding Singer,” “Little Nicky,” “Big Daddy,” and the list goes on and on. He’s also, several times, ventured outside of his typical silly comedic roles with projects like the recent “Uncut Gems,” and the absolutely heartbreaking, but wonderful “Reign Over Me” which co-stars Don Cheadle. “Hustle” is another venture into a more dramatic role, and he absolutely nails it. This movie is another example why he’s one of the biggest names in Hollywood and has a net worth of almost half a billion dollars!

Honestly, I wish I’d have known before just a few minutes ago that this movie was showing in select theaters. I may have gone to see it. Instead, I streamed it on Netflix at 5:30 this morning. I think you’ll be pleased either way. Some movies, like the new “Top Gun: Maverick,” you just REALLY need to see on the big screen. “Hustle,” on the other hand, is perfect to watch in the comfort of your home. Again, I’m a big Sandler fan and I’m a huge fan of sports movies, so I loved this movie. If you love the classic sports movies like “Bull Durham,” “Remember the Titans,” “The Program,” “Field of Dreams,” “Hoosiers,” “Rudy,” and others, I think you’ll really enjoy this one too.