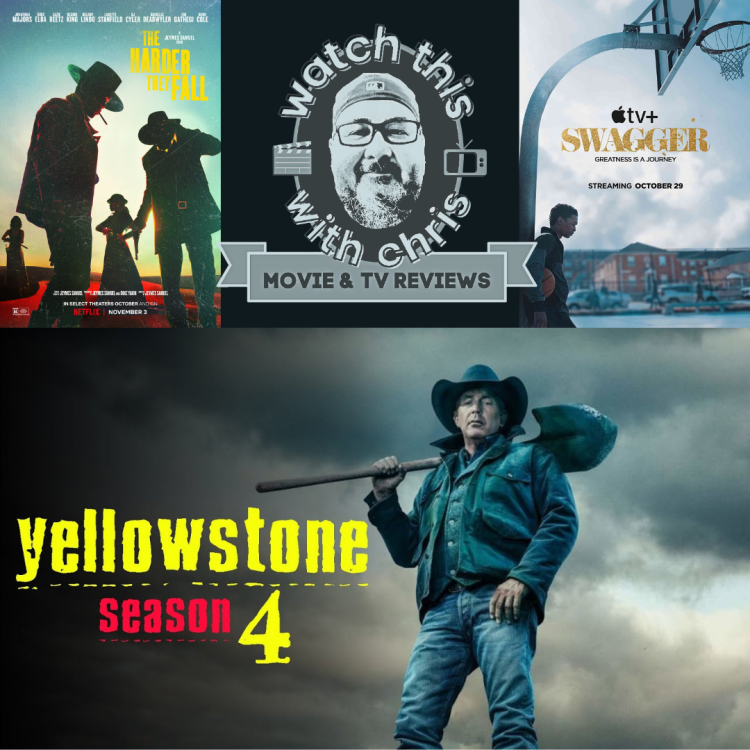 “Swagger” is inspired by Kevin Durant’s youth basketball playing experience on the AAU circuit. Much like the title suggests, “Swagger” has all the skills it needs. Some say it gets a somewhat slow start, but I disagree. I was intrigued by the story initially, but then I was immediately invested in watching all four initial episodes. Now I’m anxiously awaiting episode 5, which comes out this coming Friday.

O’Shea Jackson Jr. (Straight Outta Compton, Den of Thieves) and newcomer Isaiah Hill lead this story about all that comes with a 14-year-old basketball player’s potential stardom. I feel like performances are strong all the way around. And the show really starts to take off once Jace (Hill) starts to get out of his own head and the show gets away from some of the social media chatter that initially is the show’s main source of conflict. There’s a lot of issues surrounding egos (which is real life stuff) and the importance of being a team player.

You see a lot of relationship building and strengthening and everything that life tends to throw at relationships along the way. There is definitely a good amount of teen “drama,” but let’s face it. There is a lot of drama happening in the lives of our teens. The teenage years are not easy.

Apple TV is spot on with this series They already have a winning, award-winning sports comedy show in “Ted Lasso.” “Swagger” brings the drama side and, in my opinion, is one of the best sports dramas in recent years. I’m also a big fan of “All-American,” and I put “Swagger” up there with it.

Whether you’re a basketball junkie or just a casual fan, “Swagger” rises to the occasion and is almost instantly captivating. Obviously, if you’re a person that somehow hates sports (who are these people?), then you might not get down with it, but anyone who even cares a little bit about the game, I think, is going to enjoy this one.

“Swagger” is rated TV-14 for some adult language and maybe some “uncomfortable’ situations. I think you should give this one a shot, and I give it a 3.8/5.

The Harder They Fall (streaming on Netflix)

Westerns are back!!! Now I’ve told you all before that I’ve never been a big western guy. I’ll always love “Tombstone” and “Young Guns” and a few others, but it’s just never been my genre of choice. Maybe it’s because my dad watched a LOT of westerns on Saturday mornings when I was a kid. That’s probably the same reason I don’t like Star Trek. I guess I got burned out at an early age. However, I am a big fan of Idris Elba, and friends, he delivered in this one! “The Harder They Fall” is a fantastic movie!

When an outlaw discovers his greatest enemy is being released from prison, he reunites his gang to seek vengeance. The film mostly takes place in Redwood City, an African American old west town. The film is based on real-life 19th century cowboys including Nat Love, Rufus Buck, Stagecoach Mary, Cherokee Bill, Jim Beckwourth, Bill Pickett, Bass Reeves, and Trudy Smith.

Jeymes Samuel’s revisionist western assembles an all-star cast of both actors and legendary Black western figures from across time for a fictional story about two rival gangs, the Nat Love and the Rufus Buck gangs. The film offers rare representation for Black cowboys, frontiersmen and lawmen who have largely been written out of Hollywood’s cinematic depictions of the Old West.

This cast though…awesome! Let’s start with Jonathan Majors (Lovecraft Country, The Last Black Man in San Francisco) as Nat Love. I wasn’t super familiar with Majors going into this film, but I will definitely check out some of his previous work. Great actor! Idris Elba (The Dark Tower, Luther) plays Love’s nemesis, Rufus Buck. Elba is ALWAYS spot on and, in my opinion, one of the most solid actors in Hollywood. In fact, I’ve heard rumors that he’s been considered as the next James Bond. I think that would be incredible! The great Regina King (Ray, If Beale Street Could Talk) takes on the role of Trudy Smith. Zazie Beetz (Atlanta, Joker) plays Stagecoach Mary, and Damon Wayans Jr. (Let’s Be Cops, Big Hero 6) and Delroy Lindo (Da 5 Bloods, Gone in 60 Seconds) rounds out an incredible cast.

So, the characters are based on real-life Old-West outlaws, but the story is fictional, as it’s assumed that Love and Buck never met in real life. Director Jeymes Samuel says, “It’s not a biopic, so I wasn’t looking at who necessarily looks like any of those characters, because none of them do. It’s just what they embody as actors…Western history is like a bridge between slavery ending and the civil rights movement beginning. It’s empowering when people are able to see their rightful place in society and the many different avenues that were taken other than what is generally shown in movies, television and textbooks.”

Y’all, this movie is great! It’s really violent, so maybe don’t watch with the kiddos, but I highly recommend. “The Harder They Fall” is rated R for strong violence and adult language. I give this one a 4.4/5. Watch it and tell me what YOU think.

If you’re, somehow, one of the few people on the planet who hasn’t watched/isn’t watching “Yellowstone,” WHAT ARE YOU WAITING FOR??? Season 4 kicked off on Sunday night with not one, but two brand-new episodes, and it’s very clear this season is going to be as epic as the ones before. I highly recommend you get to watching. You can watch on Paramount Network, Hulu, Prime, or the Philo app. You can also get seasons 1-3 on DVD at the incredible Saline County Library!!!