Many times anymore, you read about these things on Facebook long before you get official word about what happened. The screenshot below is what I saw in my news feed at 7:36 p.m. last night, giving a glimpse into the scene. The Benton Police Department (BNPD) would release a statement today from their point of view. 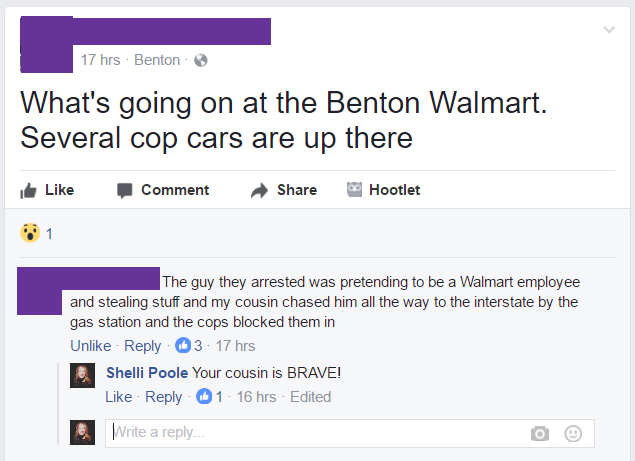 According to the BNPD, at approximately 7:05 p.m. Tuesday, March 22, their officers responded to Walmart in Benton for a report of a shoplifting in progress. Upon arrival, officers made contact with two suspects inside the store’s garden center but both suspects fled on foot in different directions. (This is where the Facebook post comes in handy to possibly fill in some blanks.) Both suspects were later apprehended and taken into custody. Anyone with information about this incident is encouraged to contact the Benton Police Department at 501-778-1171 or 501-315-TIPS. Individuals also may send an anonymous crime tip about this incident to CRIMES (274637) with the keyword BNPD in the body of the text or go to www.crimereports.com to leave a tip. A crime tip can also be submitted via the official Benton Police Department app found on iTunes and Google Play.