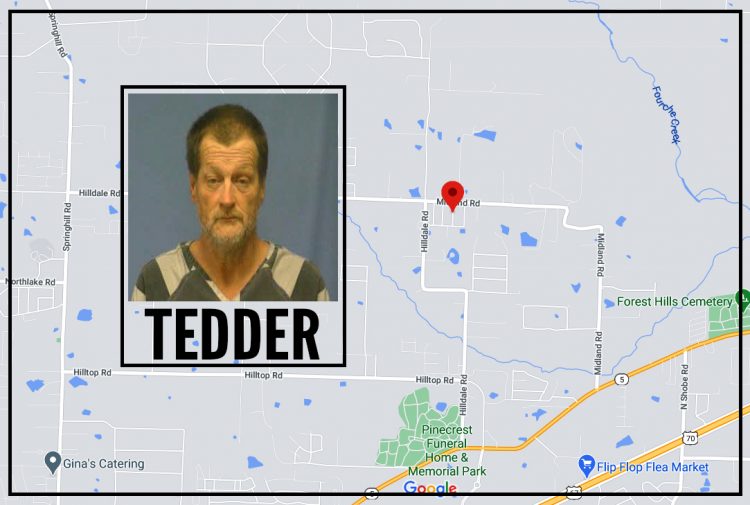 Tedder arrested over the weekend after activities with weapon.

The Saline County Sheriff’s Office arrested a man on Sunday evening around 5 p.m. after activities with a weapon, according to the police report. A deputy answered a call from resident, David Tedder, age 56, of an unincorporated area of Alexander, saying 6-8 people were trying to break into his home on Larry Lane. The report stated that the deputy was advised on the way to the residence that a subject there calls 911 often for similar hallucinations.

Tedder’s step-father reportedly called 911 to say Tedder was now there at his parents’ residence on a nearby street and had discharged a sawed-off shotgun in the air. The deputy found Tedder at the parents’ home, but Tedder said he didn’t have a weapon. The report states that Tedder again said there were 6-8 people trying to break into his house.

The deputy stated that Tedder was unarmed but was manic and paranoid, and asked the deputy if he “could see all those people in his yard.” The deputy noted there was no one in the yard.

The deputy stated that the step-father went inside and returned with the weapon in question. Tedder was arrested for “possession of a firearm by a certain person” and the gun was taken in evidence.