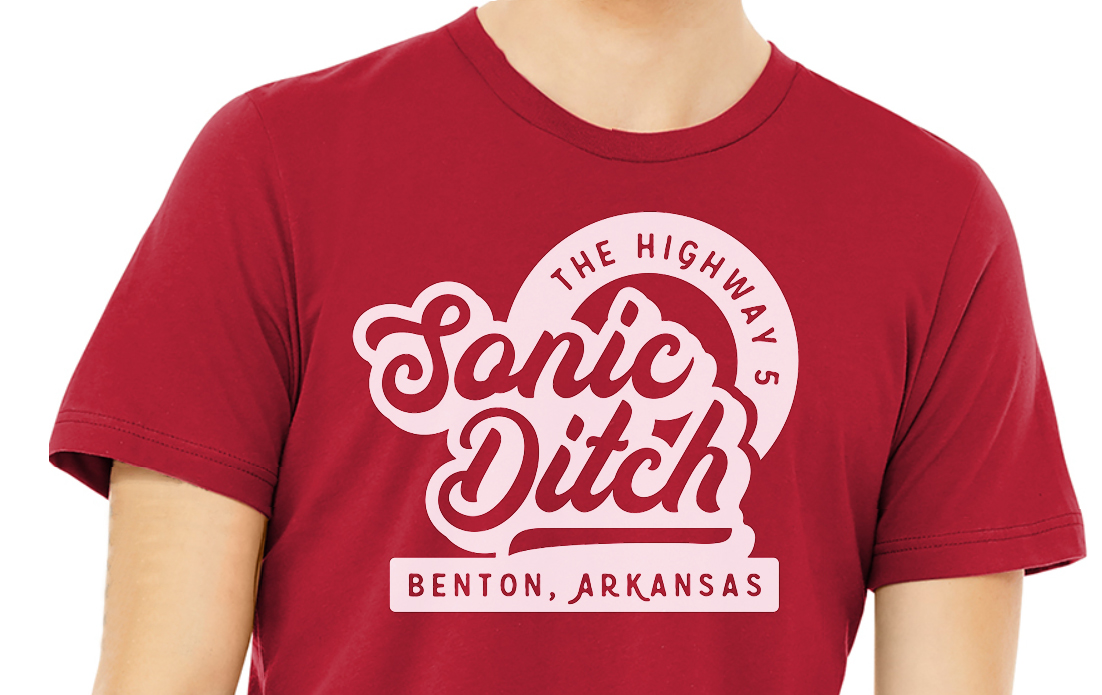 If you don’t know the story of the Sonic Ditch, scroll down past the line to read it. Meanwhile…

Thanks so much to everyone who ordered!! Orders for the 2nd round are cut off and numbers sent to the screenprinter. I still have a lot of people who need to pick up their shirts from the first order, but I’m about to go on vacation so it will have to be next week. If you are thinking you need info, see the bullet list below…

We are definitely doing a 2nd order, so… please go ahead and submit your order info and pay!

Read all the info in these bullet points, then click the order link in the last bullet:

We asked in the Sonic Ditch Facebook Group if the community would be interested in buying professionally designed shirts. You overwhelmingly said yes! Wendy Brown of Brown Bear Digital created this awesome design and MySaline is promoting and doing the orders and distribution. If you already bought a shirt in the first order process and haven’t received it yet, we will be contacting you soon. 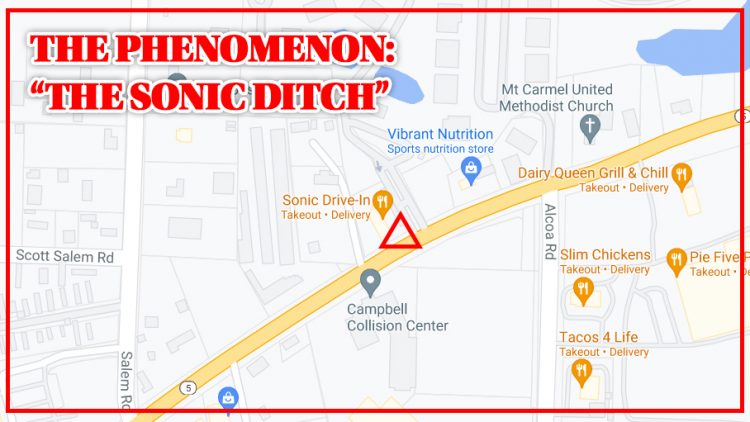 I was going to circle the location, but a triangle seemed more appropriate.

In the midst of the varying levels of disagreement on politics and the pandemic, locals are coming to an agreement on at least one thing. There is a place in Saline County that many in the community are suddenly discussing – not because they have been there, or they want to go there – but because of the people that ended up there, entirely by accident. In short, this place has become infamous as “the Sonic Ditch.”

Maybe that’s all you need to hear, and you know right where it is and exactly what happens in it. For the folks who don’t know, it’s on Highway 5 North in Benton, about a block west of the intersection with Alcoa Road, and across from Benton’s Fire Station No. 5. The ditch is talked about because it has a certain magnetism. Vehicles end up in this ditch – I wouldn’t say at an alarming rate, but plenty often. More often than I stub my toe on furniture. More often than getting anything in the mailbox besides junk. Even more often than I forget to change the laundry over to the dryer. (You’re welcome, for reminding you.) 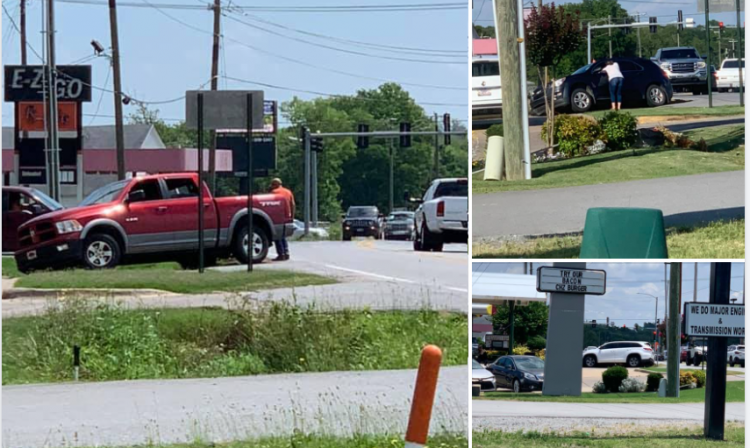 The phenomenon has very recently been discussed at great length and depth – and with pictures. Because a local man decided he would make a Facebook group to talk about it. The creator of this group, called Highway 5 Sonic Ditch – Benton, AR, said he worked for years at the car dealership nearby, and witnessed countless vehicles with their nose in that ditch. He said he had some spare time last week and thought it would be fun to make a group to swap stories with a few people about the cars and trucks they had seen in this Bermuda Triangle of sorts. A few people did join the group. And then over a thousand people joined.

“This is the most relevant group on Facebook!” Joe Young posted.

Jay Tomlin said, “Thank you to whoever created this page. For the last 15 years… that poor ditch has claimed hundreds of cars.” 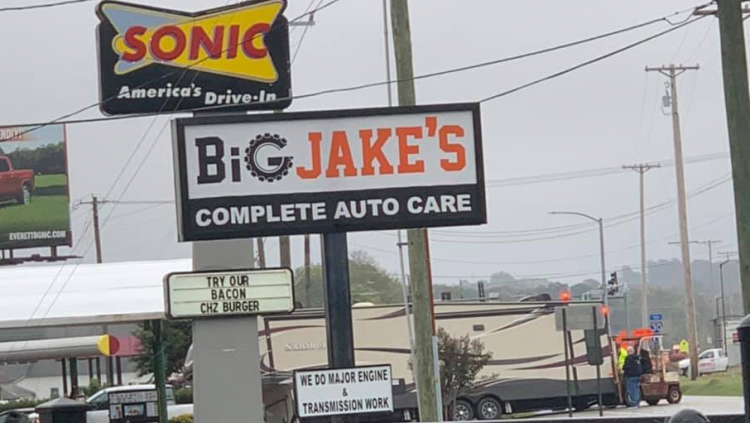 For some reason, this particular ditch has been a real hazard for cars, trucks, SUVs and at least one RV. The conversations and the photos multiplied in the group, but the interesting part is the questions people asked, and the theories that developed. 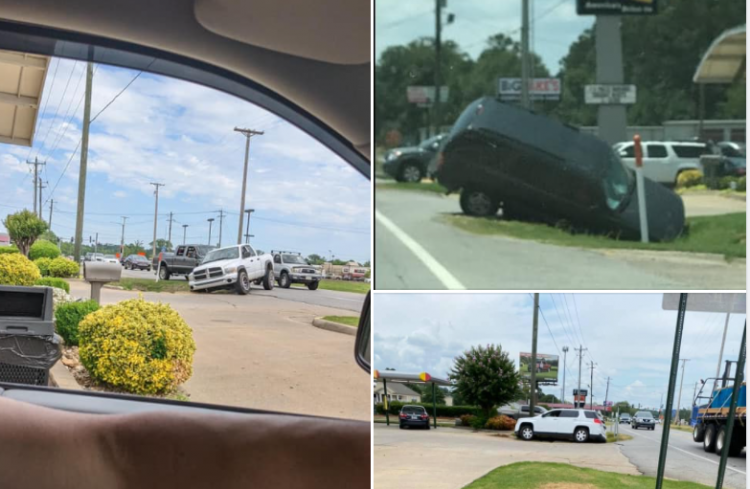 Dustin Price asked, “Has anyone noticed that the majority of the cars that [have driven] in that ditch are white?” This led to a discussion of the legend of a white car crashing in that location decades ago, when the property was a “Yogi Bear” campground. The implication apparently, is that the ditch might be haunted and targeting white cars. 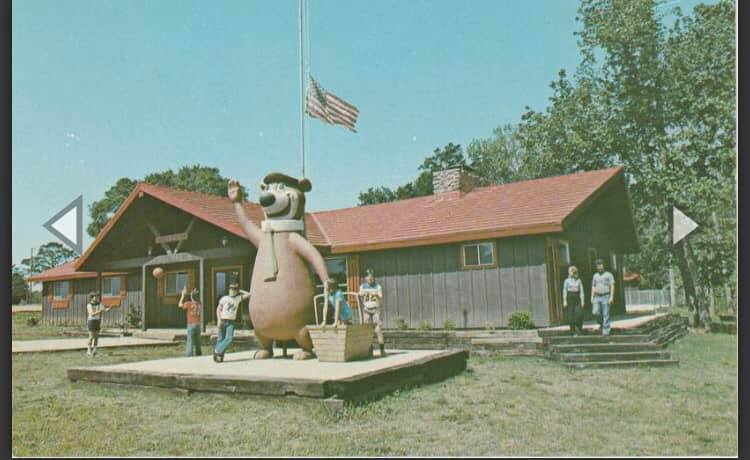 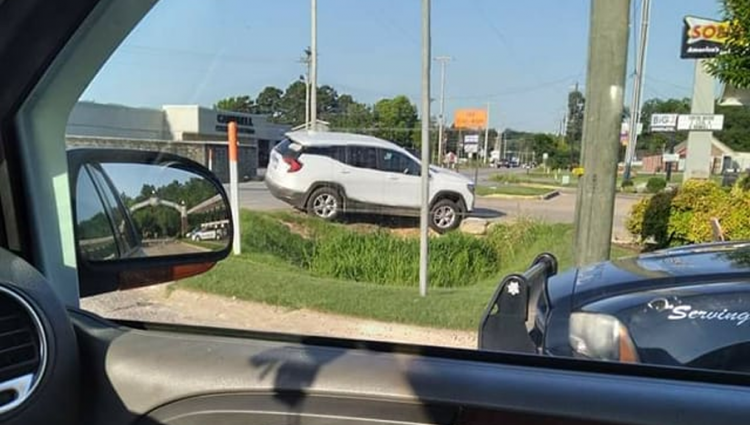 Amanda Tiner attempted to get to the bottom of it, asking, “How does someone drive into this ditch? I mean it’s there and it hasn’t moved.”

Debbie Crawford admitted she has almost gone in that ditch – and she has a white SUV.

Brenda Rhodes said she drives a white truck and won’t go to that location because she doesn’t want to be “FB Famous.”

Nicole Rogers stated, “I’ve never personally had any run-ins with the ditch, but a former co-worker did about $6000 in damage to my boss’ Benz a few years back.”

Shelli Poole (yes, me) said she drove a smaller car through there safely many times and for many years, but one day when she was driving a truck:

Tabitha Squires offered the idea of naming the ditch, “You know how bad curves get cool names like dead man’s curve… We should name this ditch!” And some clever options showed up in reply.

Michael Wade said to call it, “Station 86” and they can “put an order screen in the ditch.” 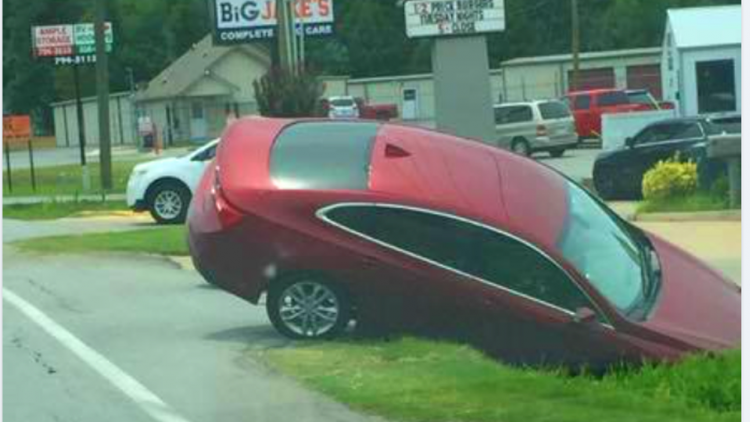 Some people pointed out that this is not the only vortex to be found in the county.

Kenton Byrd asked, “Is it also OK to post people who have gone in the ditch at the Pilot station on Alcoa?”

Amanda Reising suggested, “We need a page for the pot holes at the Alcoa Exchange Shopping center! I feel like Shelli Poole has old videos of that hole.” Why yes, yes I do: www.mysaline.com/alcoa-crossing-pothole

Neill Washburn said, “There is another ditch that claims some vehicles just past Reynolds on Hwy 5 going towards Benton. Not sure that it has its own page though.”

Tony Newboles quipped, “Oops. Wrong room. I was looking for the Pothole by Kohl’s page.” 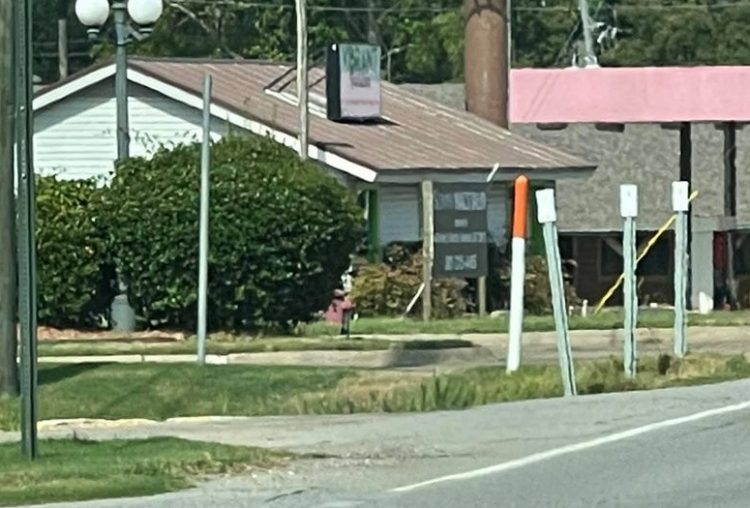 There have been some updates and possible solutions offered. Teri McConnell Cantrell said, “I just heard they put a fence up today… is that true? Why take our entertainment away after all these years?”

Haleigh Sawyer and Ray Robinson pointed out that it’s just posts, not a fence, and they have been erected for at least a couple of weeks. (Photo above by a group member)

Tabitha Squires noted that it should be a fence, but that perhaps the poles should be decorated.

Crystal Peacock recommended balloons on the posts for visibility.

Rachel Noraa suggested a “Petition for Sonic to fill the ditch with hamburgers and corndogs so no more victims can be claimed.”

Meanwhile, a couple of people tried to get to the root of the problem.

Danita Huff said “I believe it’s driver error myself. So many people can maneuver that corner with no problems… ever. I just don’t think drivers are paying attention.”

Tony Fuhrman studied it out on a satellite map from Google, “In my opinion, people shoot for the middle of the awnings instead of the middle of the driveway.” He may be onto something there. (Photo below by Fuhrman) 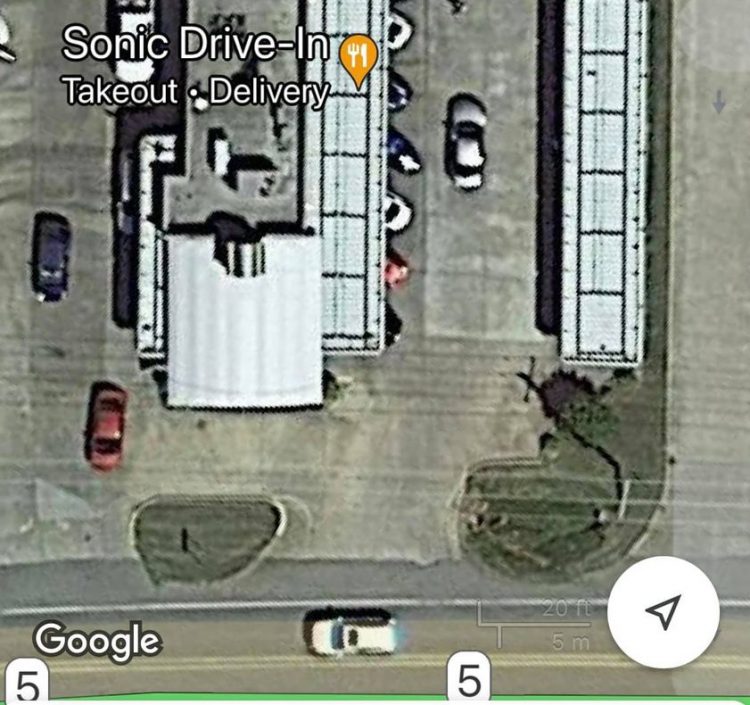 Lastly, enjoy this short video showing the Park of Shame for a great number of vehicles. But before you go, please remember to swing wide, and pay attention to the road. Like, the actual, literal road.