The community of Paron in the northern part of Saline County has had a tough time with education in the last 10 years. In 2006, they were state-mandated to consolidate into Bryant Schools. They lost their high school, with the older kids now being bused 26 miles away, to Bryant High School.

In 2015, after a failed millage election, Bryant Schools made the tough decision to close the remaining public schools in Paron. Now the middle and elementary school children would also be bused a distance away. As of this writing, we’re in the second school year that there have been no public schools operating in Paron.

The school building was handed over in ownership to Paron Community Trust in 2007. A group of citizens formed from that in 2015, with the goal of getting approval for a charter school. They’ve come a long way in the process and had a hearing on August 18th, 2016. In their first application attempt however, they were denied approval by the Charter Authorizing Panel. The main concern was the amount of students there would be. It’s a difficult number to pin down unless parents themselves get involved in this process. 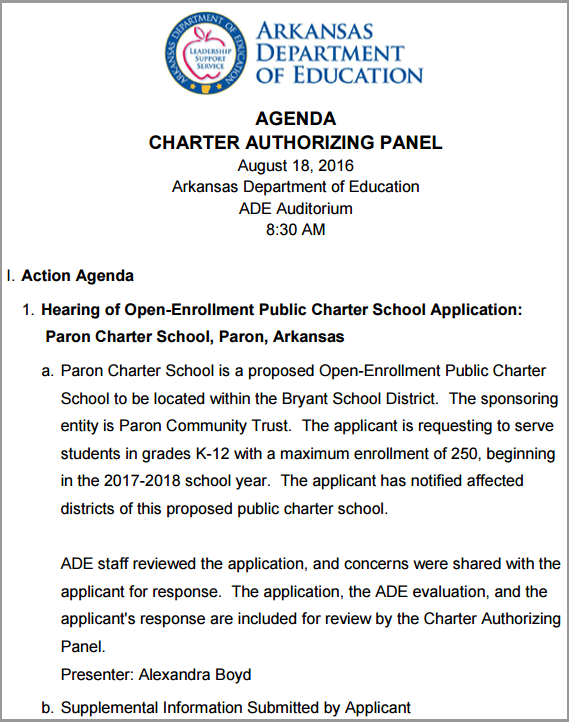 The case for Paron Charter School will now go before the Arkansas State Department of Education (ADE). They have the authority to go with the Panel’s decision, or to make their own decision.

Now the Paron Community Trust needs to show the ADE that there are enough kids to sustain a school. It’s very important for residents to inform this group of how many of your children would go to public school in Paron if there was one available again. The Trust has about two weeks – or until September 2nd to get a real count of possible students before they request another hearing with the ADE.

You can see the meeting agenda from August 18th and the accompanying application from Paron Community Trust at this link.

Paron parents and guardians should :