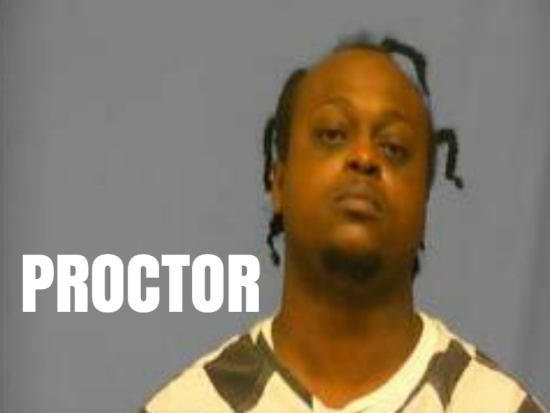 On Wednesday, the Saline County Courthouse held its first jury trial of the year.  The jury convicted Marcus Proctor, age 34, of fleeing and possession of controlled substance.  Judge Ken Casady followed the jury’s recommendation and sentenced Proctor to six years in the Arkansas Division of Correction.

According to the Saline County Prosecutor’s Office, in the early morning hours of October 30, 2021, Proctor left Hot Springs for his home in Little Rock.  Saline County Sheriff’s Deputy Chris Webb was patrolling Highway 70 when he spotted Proctor speeding.  Webb attempted to stop Proctor, but Proctor fled from him.  Deputy Webb was unable to catch up to Proctor as he entered the construction area at Highway 70 and Interstate 30.  Webb alerted other sheriff’s deputies of his location and described the vehicle as a four door silver sedan.

An Arkansas State trooper was able to stop Proctor’s vehicle by performing a successful PIT maneuver as Proctor entered Pulaski County on Interstate 30.  The trooper struck the rear of Proctor’s vehicle, causing it to spin and eventually stop on the interstate.  Following his arrest for fleeing, officers found what they described as an ecstasy pill in Proctor’s pocket.  The pill later tested positive for methamphetamine.  The search of Proctor and almost the entire pursuit were recorded by police video.

At trial, Proctor testified that he panicked when he first saw the blue lights behind him. He said that he wanted to find a safe place to stop in Little Rock and contact his family.  He admitted that his friend gave him “X” when he left Hot Springs.  Proctor also testified that he was “all gas, no brakes” when it came to mentoring his coworkers and supporting his 11 children.

Prosecuting Attorney Chris Walton highlighted the dangers of fleeing from officers, “Individuals put not only themselves, but also the pursuing officers and general public in danger when they flee.  We all know what it feels like when someone flies past us on the interstate.  It didn’t have to go this far. Proctor could have pulled over and received a speeding ticket.”

Walton thanked members of the Saline County Sheriff’s Office, Benton and Bryant Police Departments, and Arkansas State Police for stopping Proctor before he hurt anyone.

Proctor has prior convictions for robbery, felon in possession of a firearm, and theft of property.  He will be eligible for parole in approximately one year.

Deputies Shea Long and Brian Clary tried the case for the State. T. Bowie an attorney from Arkansas County represented the Defendant.