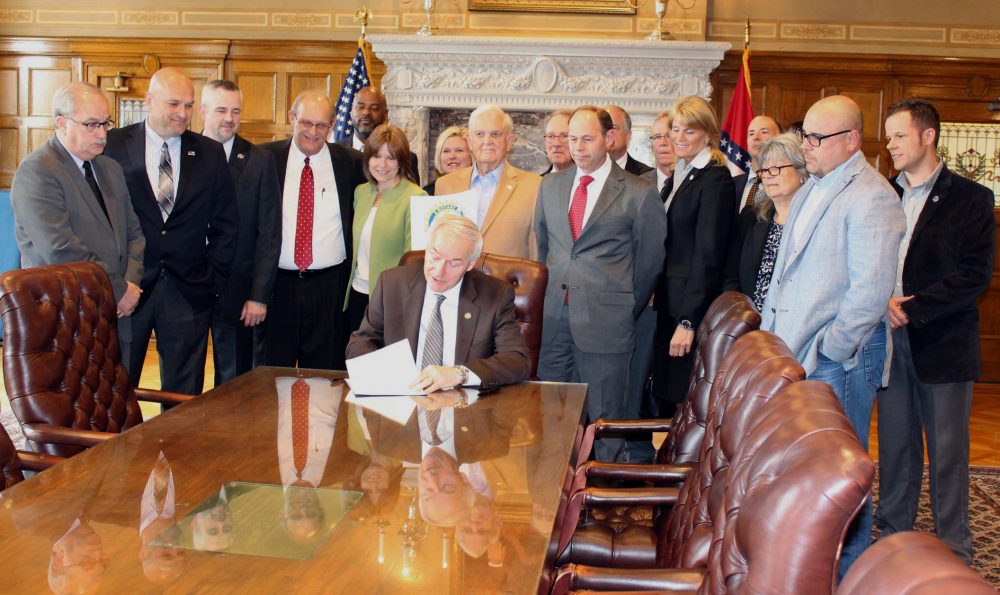 John Kirtley, executive director of the Arkansas State Board of Pharmacy, said that the “Incredible abundance of opioids like Hydrocodone and Oxycodone in Arkansas paired with the mistaken belief that prescription drugs are safe and are not addictive has created an unfortunate prescription drug abuse epidemic in this state.”

“States which have mandatory requirements for prescribers to check their Prescription Drug Monitoring Program have shown a 25% decrease in deaths and emergency room visits,” said Benton Police Chief Kirk Lane. “These proven numbers, will be of great benefit to those struggling with this type of addiction along with their families. The law is not aimed to deprive anyone of needed medications, but is directed at prescribers to make better prescribing decisions based on history.”

Scott Doerhoff of Willswork.org and the Speak Up-Speak Out Program added, “This law will better ensure that the opiate supply available in society at any given time will have been measured and directed toward the intended purpose – versus unknowingly prescribed in abundance to a degree of the risk the drugs will be abused or in the hands of unintended individuals.”

The state law further mandates that a practitioners licensing board will also require the practitioners to check the Prescription Drug Monitoring Program before prescribing opioids or benzodiazepine (to first time patients). There are a few exceptions written in Act 820, including before and during surgery, recovery from surgery while the patient is in a healthcare facility, hospice patients, nursing home patients, or in emergency situations.

The Prescription Drug Monitoring Program was established in 2011 which states, “Arkansas law requires that each dispenser shall submit, by electronic means, information regarding each prescription dispensed for a controlled substance. Each time a controlled substance is dispensed to an individual, the dispenser shall submit the information required by Arkansas law to the central repository weekly for the previous week, Sunday through Saturday.”

In 2012, 259 million prescriptions were written for opioids, which is more than enough to give every American adult their own bottle of pills, according to the CDC. Drug overdose deaths involving heroin continued to climb sharply, with heroin overdoses more than tripling in 4 years.

“This epidemic can be turned around if we all accept our responsibilities in this tragic and growing deadly epidemic, and work together collectively to make the difference,” Lane said. “Using the Prescription Drug Monitoring Program to it’s potential, improving prescribing habits, Prescription Drug Takeback programs and the Naloxone programs are tools that will turn the tide, if we will just accept them and use them as they were designed.”

For more information about the national opioid epidemic (as stated by the Centers for Disease Control and Prevention) and how to properly secure and to find a location to dispose of prescription medications, please visit www.artakeback.org.