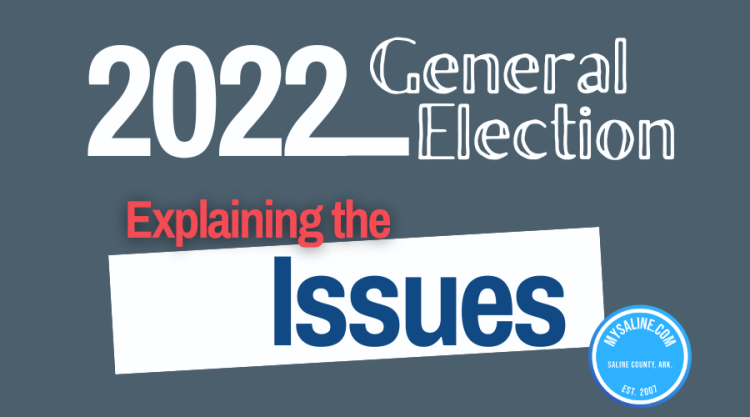 See the list below to find the issues that have officially made it to the State ballot for the November 8 General Election for 2022.

The University of Arkansas Extension researched and published a guide, along with a video (below) to explain, in an unbiased way, what the issues are, so that voters can decide. See some of the information below, and click the links after each Issue to get more info.

Giving State Senators and Representatives the Authority to Call Special Legislative Sessions and Set the Agenda.

requiring the General Assembly to establish by joint rule during each regular session procedures for an extraordinary session under this amendment;

and providing that this amendment does not restrict the authority of the governor to convene an extraordinary session of the General Assembly under Arkansas Constitution, Article 6, §19.

An amendment to the Arkansas Constitution, to be known as the “constitutional amendment and ballot initiative reform amendment”, concerning the number of votes required for approval of certain measures presented to voters;

and requiring that a measure subject to a referendum shall be repealed if the measure is rejected by a majority of the electors voting upon the matter.

The proposed amendment would add language to the Arkansas Constitution that:

Prohibits state and local governments from burdening the practice of religion in Arkansas unless the government shows there’s a compelling reason to do so and acts in the least restrictive way.

Provides a legal claim in a court or other governmental proceeding for a person to seek relief against the government for imposing on their religious freedom.

The amendment would apply to current and future government laws, rules, regulations, ordinances, administrative provisions and rulings, guidelines and other requirements.

repealing and replacing Amendment 98, §§ 8(e)(5)(A)-(B) and 8(e)(8)(A)-(F) with requirements for child-proof packaging and restrictions on advertising that appeals to children;

amending Amendment 98, § 8(m)(1)(A) to remove a prohibition on dispensaries supplying, possessing, manufacturing, delivering, transferring, or selling paraphernalia that requires the combustion of marijuana;

amending Amendment 98, § 8(m)(3)(A)(i) to increase the marijuana plants that a dispensary licensed under that amendment may grow or possess at one time from 50 to 100 plus seedlings;

amending Amendment 98, §§ 10(b)(8)(A) and 10(b)(8)(G) to provide that limits on the amount of medical marijuana dispensed shall not include adult use cannabis purchases;

amending Amendment 98, §§ 12(a)(1) and 12(b)(1) to provide that dispensaries and dispensary agents may dispense marijuana for adult use;

amending Amendment 98, § 13(a) to allow medical and adult use cultivation facilities to sell marijuana to adult use dispensaries;

repealing Amendment 98, § 17 and prohibiting state or local taxes on the cultivation, manufacturing, sale, use, or possession of medical marijuana;

requiring the Alcoholic Beverage Control Division of the Department of Finance and Administration (“ABC”) to regulate issuance and renewal of licenses for cultivation facilities and adult use dispensaries and to regulate licensees;

requiring adult use dispensaries to purchase cannabis only from licensed medical or adult use cultivation facilities and dispensaries;

prohibiting cultivation facilities and dispensaries near schools, churches, day cares, or facilities serving the developmentally disabled that existed before the earlier of the initial license application or license issuance;

requiring all adult use only dispensaries to be located at least five miles from dispensaries licensed under Amendment 98;

prohibiting individuals from holding ownership interests in more than 18 adult use dispensaries;

requiring ABC adoption of rules governing licensing, renewal, ownership transfers, location, and operation of cultivation facilities and adult use dispensaries licensed under this amendment, as well as other rules necessary to administer this amendment;

prohibiting political subdivisions from using zoning to restrict the location of cultivation facilities and dispensaries in areas not zoned residential-use only when this amendment is adopted;

allowing a state supplemental sales tax of up to 10% on retail cannabis sales for adult use, directing a portion of such tax proceeds to be used for an annual stipend for certified law enforcement officers, the University of Arkansas for Medical Sciences and drug court programs authorized by the Arkansas Drug Court Act, § 16-98-301 with the remainder going into general revenues, and requiring the General Assembly to appropriate funds from licensing fees and sales taxes on cannabis to fund agencies regulating cannabis;

providing that cultivation facilities and adult use dispensaries are otherwise subject to the same taxation as other for-profit businesses;

prohibiting excise or privilege taxes on retail sales of cannabis for adult use;

providing that this amendment does not limit employer cannabis policies, limit restrictions on cannabis combustion on private property, affect existing laws regarding driving under the influence of cannabis, permit minors to buy, possess, or consume cannabis, or permit cultivation, production, distribution, or sale of cannabis not expressly authorized by law;

and prohibiting legislative amendment, alteration, or repeal of this amendment without voter approval.

You can download the 2022 Arkansas Ballot Issue Voter Guide or pick up a printed copy from any of the 75 county extension offices statewide.

Return to the main page for 2022 elections: