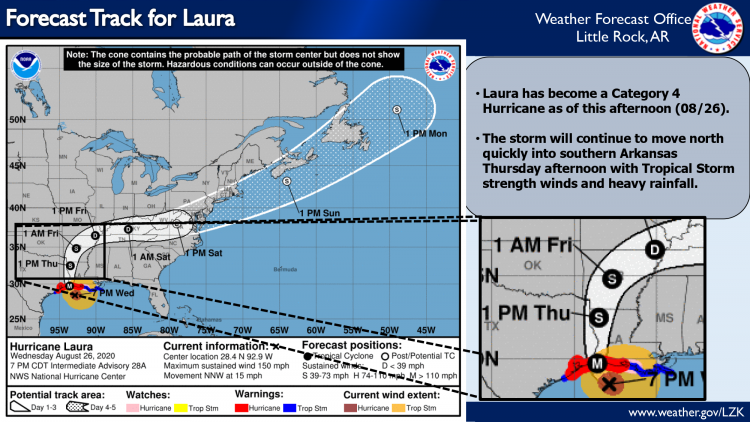 The National Weather Service in Little Rock issued the following detailed briefing to give Arkansas residents an idea of what to expect:

Hurricane Laura is currently rated as a strong Category 4 Hurricane and it is expected to make landfall near the Texas/Louisiana border around midnight Wednesday. The landfall for a hurricane is considered the time that the center of the storm (in this case the hurricane is strong enough to have a well defined “eye”, so the eye of the storm) moves over land. Hurricane Laura is bigger than the state of Arkansas, so the storm will impact the state well ahead of the time the center of the storm moves over the state. Please keep this in mind as you look at graphics for the timing of where Laura will be at any given time. The “dot” showing the forecast for Laura is simply the center of the storm, and the entire storm is huge, and will impact your area well ahead of the “dot” on the forecast map. 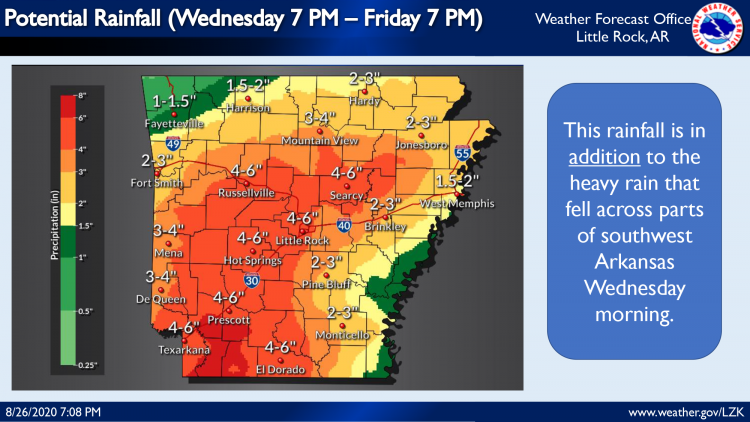 Heavy rain and strong winds are expected to start to impact Arkansas as early as early Thursday morning for parts of southwest Arkansas. Rain bands associated with Laura will bring periods of extremely heavy rainfall with rainfall rates at or above 2″ per hour, followed by a relative lull or even complete absence of rainfall. Bands of rainfall associated with tropical storms behave like this – you get intense rainfall when the band moves over your location, and then the rain all but ends until the next band arrives. Bands of heavy rain are expected to continue to rotate counterclockwise over the state of Arkansas ahead of, and behind, the center of Laura from Thursday morning through Friday late morning or mid-day. The exact speed and track of Laura over the state will play a large role in its impacts on the state. This briefing represents our best forecast for impacts given the current state and forecast track of Laura, so check back for forecast updates as landfall will have a big impact on the speed and intensity of Laura. 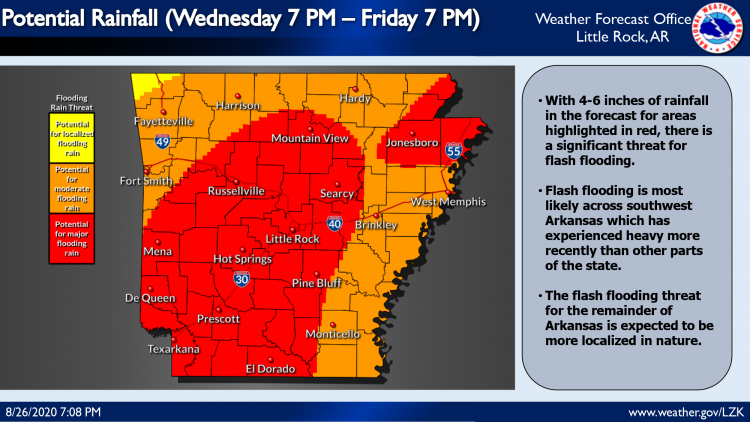 The primary impacts associated with Laura moving over Arkansas are expected to be flash flooding, downed trees and the associated power outages, and lastly, isolated tornadoes.
Flash flooding is most likely and is expected to have the greatest impact across parts of southwest Arkansas which saw anywhere from 2-6 inches of rain earlier Wednesday morning has already fallen, leaving soil conditions saturated and primed to convert additional rainfall into runoff that leads to flooding. A flash flood threat is present across most of the state of Arkansas, but central and eastern Arkansas have been drier over the past 7 to 10 days, and can likely absorb more rainfall before flooding starts compared to southwest parts of the state. Widespread rainfall totals of 4-6″ of rain are expected across much of the state, with isolated amounts of 8″ or more possible depending on where those heavy rain bands move over the most frequently. 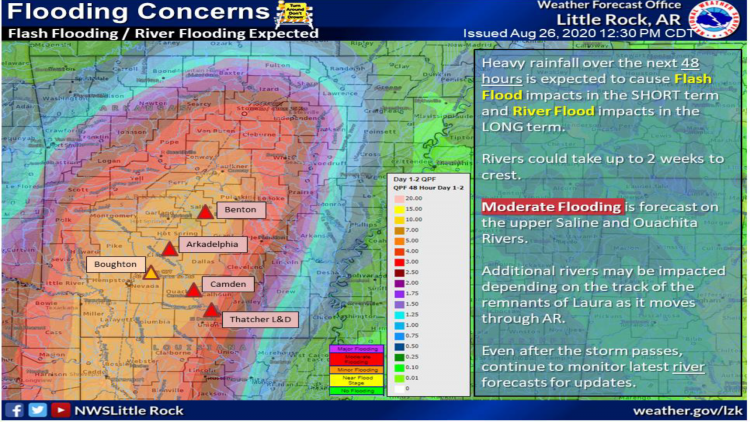 Tropical storm force winds (greater than 39 mph) will begin over southwest Arkansas as early as Thursday morning. Winds will increase in intensity through the afternoon hours, peaking out at 50 to 60 mph sustained winds, with higher gusts Thursday afternoon through late Thursday evening. As Laura moves northeast, the winds are expected to weaken. Winds across central Arkansas will likely become sustained at 30 to 40 mph at their peak with higher gusts possible from Thursday afternoon through Thursday night. North central, northeast, and east Arkansas will likely see sustained winds peak at 20 to 30 mph with higher wind gusts from Thursday evening through Friday morning. 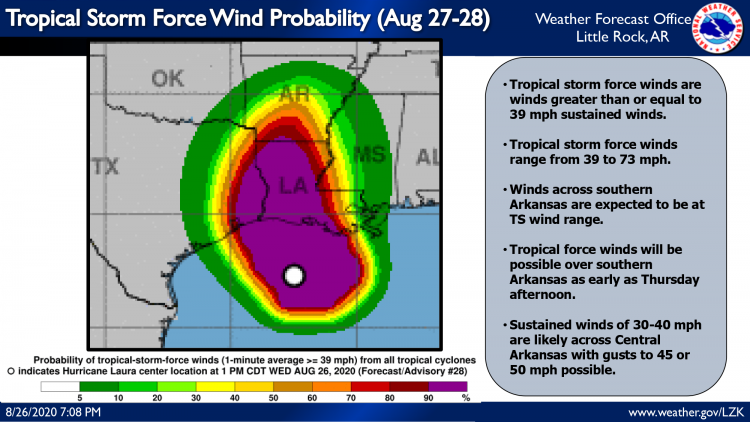 The combination of several hours of stronger winds and heavy rainfall is expected to soften up the soil while applying constant pressure on trees. Therefore where the sustained winds are highest, tree damage is more likely to be widespread, and where trees fall, power lines are usually soon to follow. Power outages could become common across much of southwest Arkansas, with the threat of downed trees and the associated power outages decreasing in density/coverage as you move north and east from southwest Arkansas. Downed trees and power outages will likely occur in parts of central Arkansas, and are expected to be more isolated across northern and eastern Arkansas. 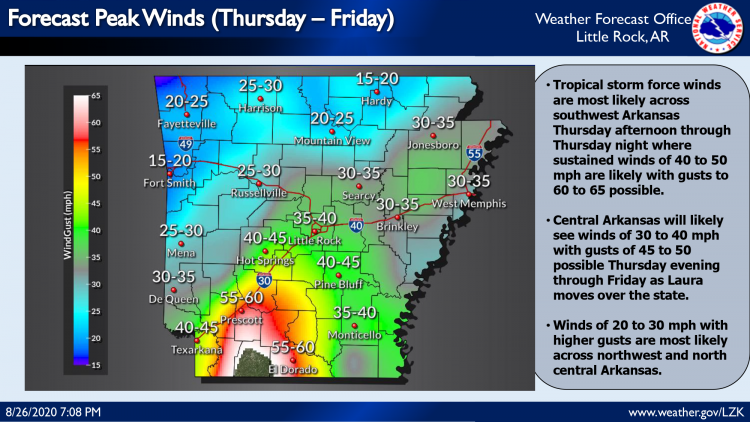 Lastly, as with any tropical cyclone, or its associated remnants, tropical cyclones always make the environment more favorable for tornadoes. Tornadoes are often more likely to the north and east of the center of the storm. Unfortunately that general area will cover much of Arkansas over the next 24 to 36 hours. Typically tornadoes embedded in tropical rain bands are weaker and don’t last as long as tornadoes that are created by supercell thunderstorms. However any tornado will be capable of producing localized swaths of enhanced wind damage within the already enhanced winds associated with Laura. Tornadoes are a threat across much of the state, but tornadoes are not expected to be the primary cause of damage/impacts to the state as Laura moves through; flash flooding and downed trees and power outages are the primary threats that we can expect. 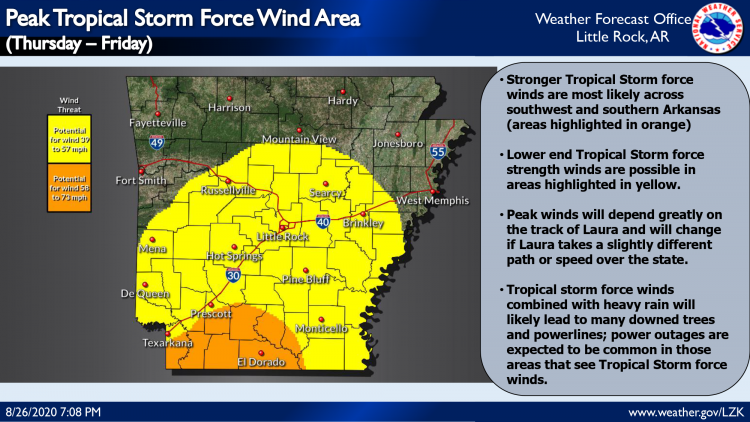 We’ll keep an eye on Laura as it moves inland, and will provide forecast updates as we continue to collect data out ahead of the storm. The next briefing will likely be sent out tomorrow (Thursday 8/27) morning. 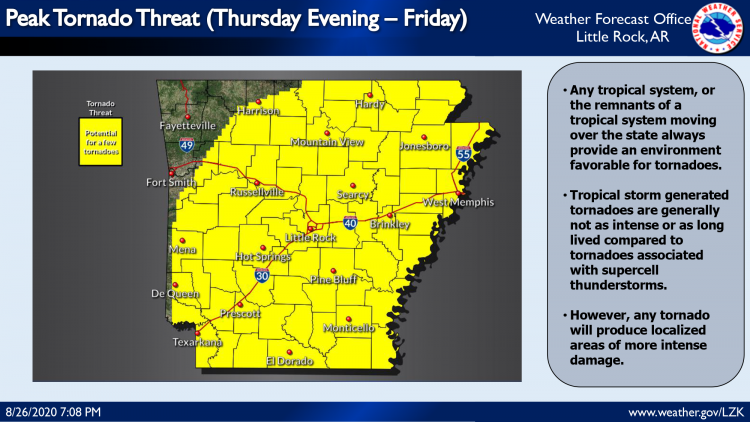