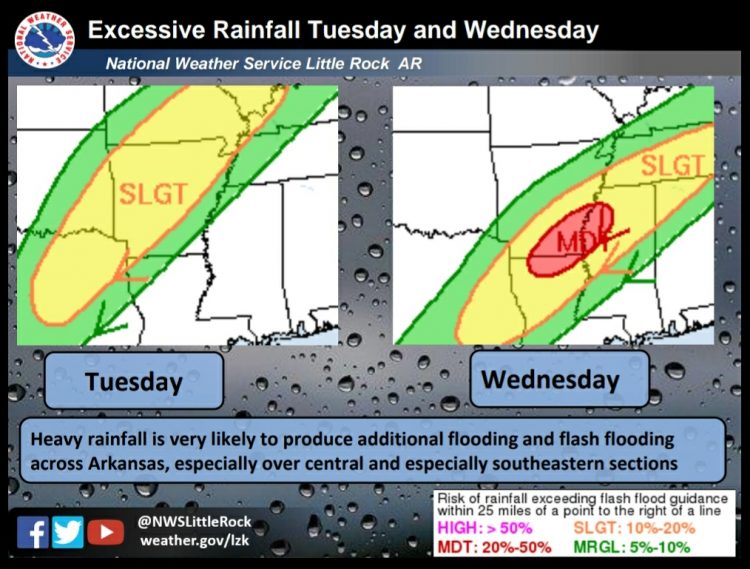 Here we go again with another heavy rain event unfolding across the state over the next few days. Several rounds of heavy rain are expected starting over the northwest half of the state Tuesday with the heavy rain threat pressing into central and southeast sections Wednesday and Thursday.
The set up is very reminiscent of what we saw in late February with a highly amplified weather pattern and copious amounts of both Gulf of Mexico and Pacific moisture. A cold front approaching from the west will be basically parallel to the winds aloft and be very slow to clear the state as there will be nothing really to push it along.
While rainfall amounts are not expected to be as high as the late February event, flooding will still be a concern. Prior to the late February event, we were in drought conditions that have been erased over the past month. In addition, many area rivers were at very low levels, that of course is not the case at this time. As such, it will take less rain to repeat these same conditions.
The front will be a focal point for showers and thunderstorms as several upper air disturbances interact with the boundary. This will brings waves of heavy rain to the state. The greatest concern and the greatest possibility of heavy rain will be along the boundary itself and with ant storms that move over the same area.
The front is expected to get into northwest Arkansas on Tuesday and slowly move through the state. It is expected to finally clear the state on Wednesday afternoon but likely stall out over northern Louisiana. An area of low pressure is then expected to develop on the front Wednesday night and into Thursday to bring another batch of heavy rain to the southeast.
Widespread three to five inch amounts of rain are expected across the state with higher amounts possible over the southeast. With the aforementioned second wave of precipitation over the southeast, local amounts could exceed half a foot.
Flood watches are already in effect for parts of the state and these will likely be expanded further south and east with time.