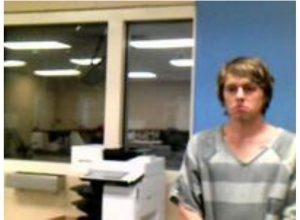 A Star City man was arrested over the weekend, in relation to a robbery at a Saline County convenience store.

On Sunday, February 7th, at 1:52 a.m., Saline County Sheriff deputies responded to a robbery call at the Big Red Valero gas station at 109 East Woodson Lateral in Hensley. A white male wearing a rag over his face entered the store and attempted to rob it at gunpoint. A customer fought with the suspect who fled, leaving the pistol and money at the station after the struggle. A BOLO (Be On The Lookout) was broadcast to all units in the area. Arkansas State Police trooper Ellison with Troop A, advised he was currently out with a vehicle and suspect that matched the description on a traffic stop. Evidence was found in the vehicle that tied the suspect to the robbery. Saline County Sheriff detectives responded, collected evidence, store video, and processed the scene. The suspect, Nathan Bailey, age 27, of Star City, was arrested and charged with aggravated robbery, a class Y felony, and was booked in the Saline County Detention Center.