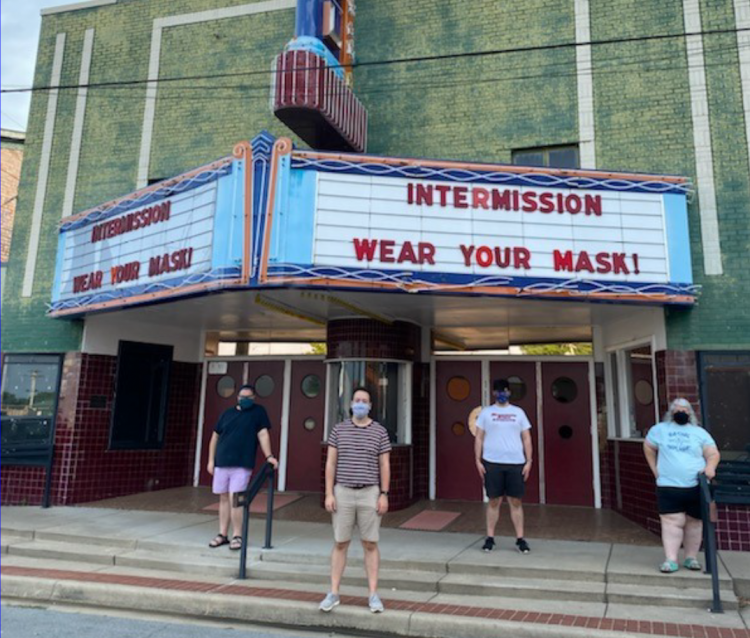 These are some of the people who get on the tall ladder to change out the letters on the marquee in front of the Royal Theatre. Pictured left to right are Matthew Burns, Tanner Oglesby, William Alverio, and Michelle Alverio.

You’ve heard the phrase “the show must go on” – well if the Royal Players and Young Players community theater members in historic downtown Benton were able to produce shows at this time, they certainly would. But there is still a lot of activity in and around the Royal Theatre where they normally perform.

The Young Players (YP) normally have workshops so the actors and crew can continuously learn more about their craft. College students who have been through the YP program have been teaching workshops through video conferencing. Matthew Glover, a junior music ed major at Henderson State University, taught Improv, and Madelyn West, a junior theatre major at Southern Arkansas University, taught Stage Management.

There are two upcoming workshops, on July 11 and 25th. Topics and times will be announced on the YP Facebook page.

Also during these times when there have not been any shows, volunteers are helping to clean up and fix up inside the theater. The next show will likely be in 2021, so the members and others are using this time to dust everywhere, clean carpets and even renovate the plaster walls. Since there are no funds from performing shows, the Players are especially grateful for donations from the community, including the following donors:

If you would like to donate, get involved or just learn more about the Royal Players and Royal Theatre, visit www.theroyaltheatre.org.