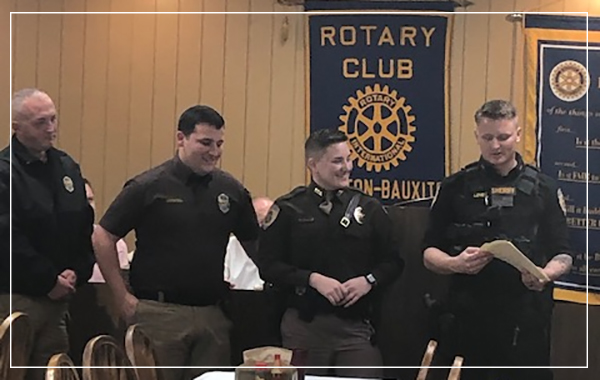 Four Saline County Sheriff’s Office deputies were recently honored by the Rotary Club of Benton and Bauxite as the First Responders of the Month.

Deputy Tyler Lovell, Deputy Tre Davis, Dep. Kate Hawthorn and Dep. Tommy Holcomb were selected based upon a nomination by Sheriff Rodney Wright which detailed their actions during a shooting that occurred on November 30th.

Each of the deputies responded to the incident in which five victims received serious gunshot wounds in various areas of their bodies. The deputies applied tourniquets and other emergency medical devices to the victims in order to control bleeding and prevent further injuries. After transferring care of the victims to paramedics, the deputies began searching for the suspect.

Sheriff Wright commended the deputies for their quick thinking, expert actions and professional demeanor during this crisis, which contributed directly towards saving the lives of the five victims.